The Daily Northwestern • May 11, 2021 • https://dailynorthwestern.com/2021/05/11/sports/football-after-strong-2020-season-northwesterns-defensive-backs-look-toward-the-future/ 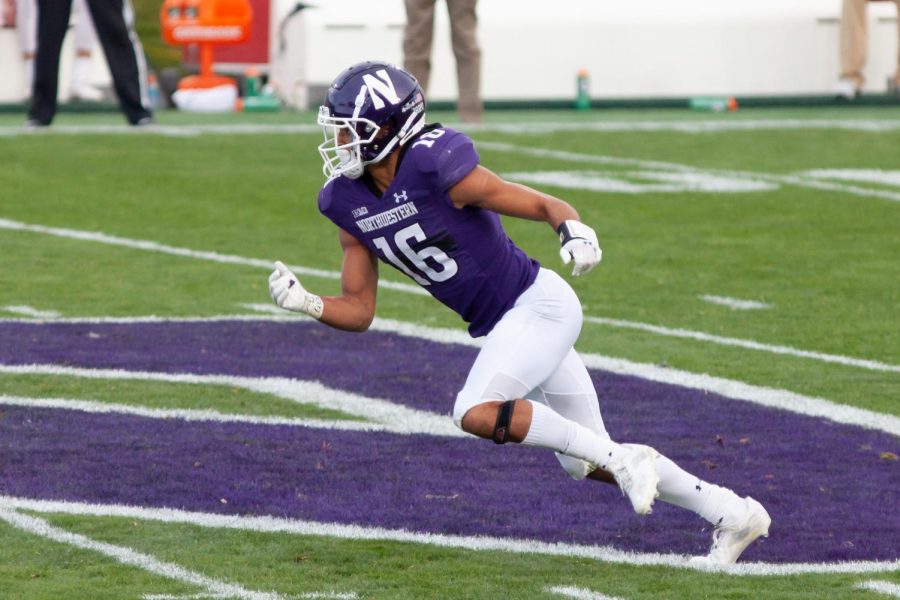 Brandon Joseph sprints towards the ball. The sophomore safety will be one of the leaders of Northwestern’s secondary in 2021.

At the beginning of each season, Northwestern selects one player to wear the No. 1 jersey.  The honor, created in 2011, recognizes “the student-athlete who truly embodies the values and character of the Northwestern football family.”

A decade later, Greg Newsome II started a new tradition with the No. 2 jersey.

Before he was selected 26th overall in the 2021 NFL Draft by the Cleveland Browns, the former Wildcats cornerback passed down No. 2  — his own jersey number — to redshirt sophomore defensive back Cameron Mitchell, who wore No. 21 last season and allowed the lowest completion rate in the Big Ten.

“He’s one of the next guys up, so I wanted to pass the number down to him,” Newsome told The Daily in April. “(No.) 2 is gonna be something that we’re starting now.”

Earning the No. 2 jersey is a new honor for the best returning secondaries in the country.

Last year, NU’s defensive backs allowed the fewest passing yards per attempt and the fourth-fewest yards per completion in college football. Additionally, the unit snatched 11 of the Cats’ 14 interceptions.

No. 2 also represents the unit’s future.

In 2021, the position group will lose two of its seasoned veterans in Newsome and safety JR Pace, who are headed to NFL training camps. As a result, the secondary — headlined by All-American sophomore safety Brandon Joseph, junior cornerback AJ Hampton and Mitchell — will look to build on a stellar 2020 season while developing the next generation of NU defensive backs.

After playing three seasons with NU’s recent first round pick, Hampton said Newsome inspired the Cats’ defensive backs with his “I’m the best player on the field,” chip-on-your-shoulder mentality.

Now, Hampton hopes to spread the same level of energy to his teammates.

“I always used to be the young guy,” Hampton said in April. “Now being the older guy… I realized people are always watching me. I try to be the ideal leader so that it helps out for the young dudes below because at Northwestern, we have a standard.”

Throughout spring ball, Hampton advised the defensive backs “to treat every practice like it’s your last.” Following practice and in the meeting room, he asked his teammates to pick one thing to improve on during training.

According to Hampton, this day-by-day approach could culminate in players becoming more skilled in many different areas by the start of the season.

“I just really try to follow that standard and set that tradition, so that when younger guys come in, they know we’re gonna work,” Hampton said.

Last year, one of those young players was Joseph, another member of the secondary. A three-star recruit from College Station, Texas, Joseph redshirted his freshman year before becoming a starter and intercepting a nation-leading six passes, as well as earning the Big Ten’s Thompson-Randle El Freshman of the Year Award.

Throughout the season, Joseph praised Newsome and Pace for their guidance. Now, he is preparing to build on his mentors’ lessons to become a leader of the defensive backs.

“Last year, I had all the experience in the world around me,” Joseph said in March. “I had probably the best defensive players in the nation surrounding me. I’m gonna take everything that they taught me and try to use that in the leadership that I want to have this year.”

When talking about the mentality of the secondary, Joseph echoed Newsome’s words, saying “we just got to have that confidence in our heads that we’re the best on the field.” A key way to maintain that confidence, he added, is to rack up interceptions.

The Cats’ defense already has ingrained the emphasis on picks. The creation of the Pick Club last season was the culmination of an offseason that prioritized ball-hawking skills and the position room’s next man up mentality. The club’s impact was clear early on in 2020, as the Cats tallied eight interceptions in three games after only grabbing seven during the entire 2019 season.

With NU’s defensive backs now seen as one of the nation’s top units, Joseph understands the importance of shutting down vertical threats across the Big Ten in 2021.

“That gives you that confidence,” Joseph said. “We just want to be able to hold that and maintain it throughout the year and use it for our advantage.”

According to Hampton, first-year defensive coordinator Jim O’Neil — who came to Evanston after spending two seasons as the Las Vegas Raiders’ defensive backs coach —  has given the secondary helpful tips from his experience in the NFL such as advice on route recognition and playing techniques.

Ahead of a season in which the purple-and-white will face up-and-coming quarterbacks like Iowa’s Spencer Petras and Wisconsin’s Graham Mertz, Hampton believes these skills can help NU’s defensive backs make a statement.

“We want to be known as the best secondary,” Hampton said. “I feel like he’s been able to provide tools to us that we would need and really help us reach that next level and make us put more trust in ourselves.”

The Cats’ secondary set a precedent in 2020 as one of the fiercest defensive back units in the country. With established veterans returning, as well as players who impressed during spring practice like sophomore defensive backs Garnett Hollis Jr. and Jaheem Joseph, the future is bright for the unit.

And Newsome, the former No. 2, is certainly looking forward to it.

“I’m proud of them,” Newsome said. “I see a new energy in that secondary and they’re ready to make a name for themselves.”