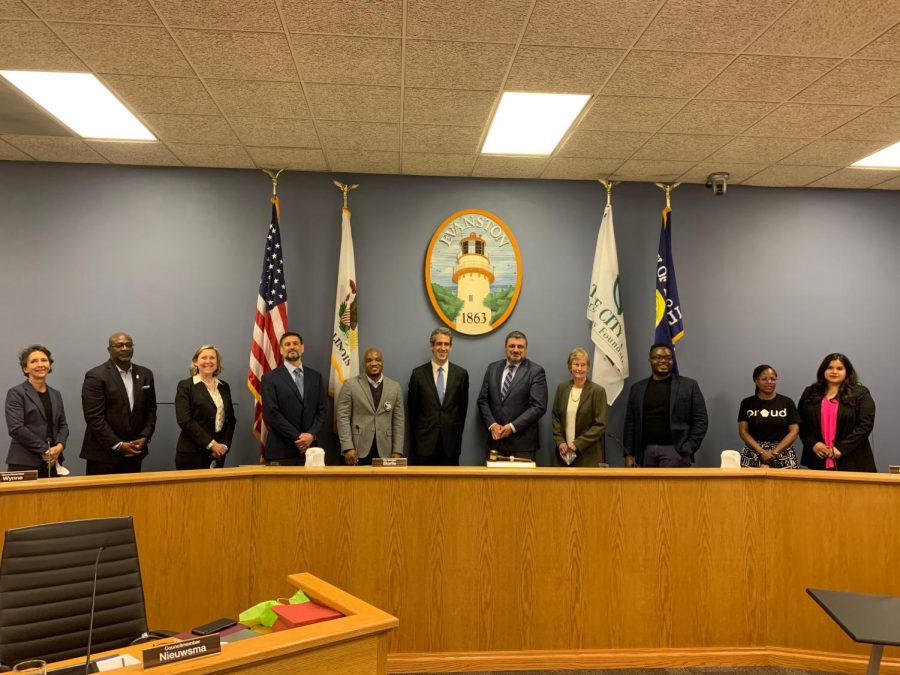 Biss said that the new council had a diversity in experience, which he called an advantage.

“We have an opportunity now, with a really wonderful mix of experienced people and incumbents,” Biss said. “I feel so excited about what we can do together with that mix.”

During the new council’s first “call of the wards,” alderpeople thanked their supporters and shared their goals for the next four years.

Burns said he is grateful to be the 5th Ward’s new alderperson, and spoke about the significance of having two council members without college degrees.

“I’m a night high school graduate, (Reid) is a G.E.D guy,” Burns said. “That means something because no matter what course you take in life, your path can lead to people seeing you as valuable whether you have degrees or paperwork or not.”

Reid was the only alderperson to make any legislative motions during the meeting. He proposed adding legislation that would end Evanston’s longtime practice of selling beach tokens to the next council agenda as a special order of business. He called for the city to use the “$2 million in (budget) surplus from 2020,” to fund free beach access for all residents.

“We can use a portion of that (surplus) to make the beaches accessible to every Evanston resident this summer and end the policy of exclusionary, and dare I say racist, policy of charging for beach access,” Reid said.

The council will revisit the proposed legislation at the May 24 City Council meeting.

Reid also motioned to add an item mandating a temporary hazard pay for Evanston’s essential workers to the next council agenda. Reid said the measure would be especially significant for employees who are Black, Indigenous and people of color — groups that have been disproportionately impacted by COVID-19.

“Hazard pay for work performed in Evanston during the COVID-19 emergency will promote job retention, compensate (workers) for the risk of working on the front lines of a global pandemic and improve their financial ability,” Reid said.

Reid said he intends for the proposed hazard pay legislation to only apply to large corporations, like Jewel-Osco and Whole Foods Market — companies he said have turned profits during the pandemic while others have suffered economically.

But Wynne disagreed with adding the legislation to the May 24 agenda as a special order of business, which she said does not allow for the necessary thorough discussion and research that occurs in city committees.

“Having a special order of business at City Council is a very foreshortened process,” Wynne said. “I agree, our essential workers are not paid enough, but I can’t support something that to me is a rushed process.”

Wynne, along with Braithwaite and Nieuwsma, said council committees and city staff should consider the item carefully before it is placed on the agenda.

The council voted 5-4 in favor of Reid’s motion to consider the item as a special order of business on May 24.

“We have to do right by these employees and act now and act swiftly,” Reid said. “This is an emergency.”