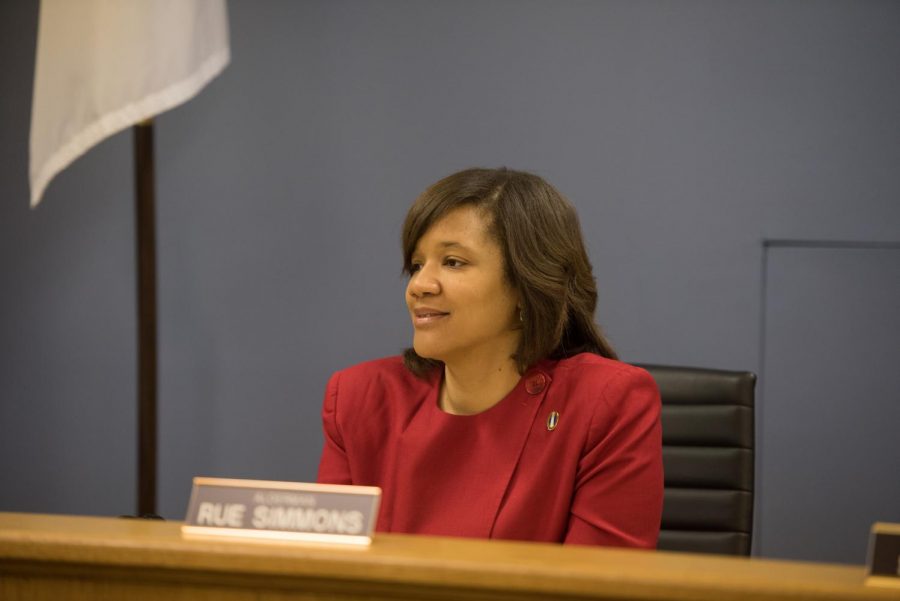 Outgoing Ald. Robin Rue Simmons (5th) sits at a city council meeting in 2017. She said the “robust” community conversations about the TIF district will occur before any action is taken.

City Council approved an ordinance Monday to further discuss the tax increment financing district in the 5th Ward, and to confirm a public hearing and Joint Review Board meeting to discuss logistics and feedback with community members.

In TIF districts, property tax revenues above a certain baseline are reallocated for public works or economic development improvements in the area. Outgoing Ald. Robin Rue Simmons (5th) said the ordinance has the potential to help the city increase affordable housing and economic opportunity.

Simmons voted in support of the plan and said it’s still in its early phases.

“What’s most important is that this is a necessity for us to understand what our options are. This is not an action,” Rue Simmons said.

In February, the city entered a consulting contract with Kane, McKenna and Associates, Inc. to complete an eligibility study and redevelopment plan for the creation of a TIF district in the 5th Ward.

In its report, the contracted company wrote the Five-Fifths TIF District Redevelopment Plan would“improve and preserve the existing tax base” and “contribute to the vibrancy of the wider area.”

She raised concerns about a part in the ordinance which states that the city may purchase private properties or acquire them by exercising eminent domain.

“If the council moves forwards with this presentation as it stands, then you are supporting the redlining practices that reparations is supposed to cure,” Paden said.

Some residents expressed concerns that the redevelopment plan will push Black residents out of Evanston. The contracted company’s report said the city “certified that it will not displace ten units or more inhabited residential units,” and thus the company did not complete a housing impact study.

In response to resident concerns, Economic Development Manager Paul Zalmezak emphasized the ordinance was focused on establishing a review board and a public meeting for further discussion about the TIF — and not on establishing a district.

Even if a future City Council recommends the acquisition of Black homes for public use, Zalmezak said the current ordinance would not allow the city to take any residential properties without a housing impact survey.

“We will not acquire residential property for redevelopment without further amendment of the plan,” Zalmezak said.

Rue Simmons said the public comments about the redevelopment plans aiming to strip wealth away from Black Evanston residents were “reckless” and causing “intentional confusion.”

In an effort to involve 5th Ward residents in TIF district discussions, Rue Simmons held a ward meeting a few weeks ago where Zalmezak presented the plan and residents gave feedback.

The Joint Review Board meeting will be on June 3 and the public hearing will be on July 12. Rue Simmons said community input will be important through all steps, and that “robust” community, committee and city council conversations will continue to happen before any actions take place.

“This is absolutely something that has the support of the community through community process,” Rue Simmons said.