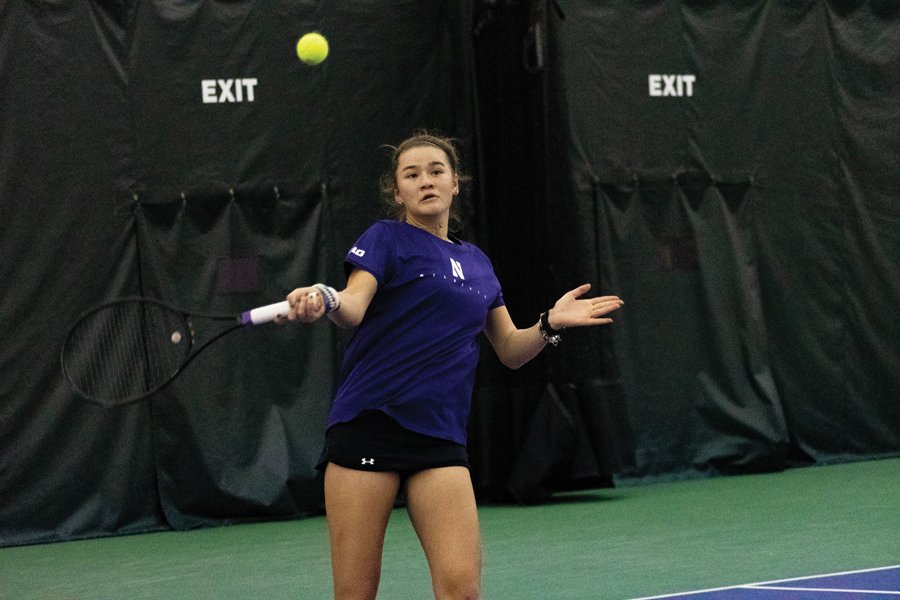 Northwestern women’s tennis had an uneven showing during the NCAA Division I Women’s Tennis Championship this weekend. The Wildcats dominated Xavier University with a sweeping 4-0 victory on Friday, but fell to Texas A&M with a 2-4 loss on Saturday.

“We battled hard,” coach Claire Pollard said. “Unfortunately, I think A&M is just a little bit better than us. We were under a little bit more pressure consistently than they were… they just outplayed us.”

Leading the program since 1999, Pollard led NU to their 25th consecutive trip to the NCAA tournament this year. The squad also got the chance to host the first and second round of the tournament in Evanston.

The No. 17 Cats entered Friday’s match against Xavier with a 18-5 record — their best record since the 2017-2018 season when they made it all the way to the Sweet Sixteen of the NCAA tournament.

NU started out well on Friday, with graduate student Julie Byrne and partner Sophomore Briana Crowley dominating their doubles match with a 6-1 win. Bryne continued her success in her singles against Xavier redshirt freshman Anna Roggenburk taking both sets 6-3 and 6-0, respectively. Junior Clarissa Hand was the clincher for the day, ending her match at a final score 6-3, 6-3.

Despite Friday’s solid performance, Pollard said the conditions on the court were less than ideal. Hand agreed, adding that she had to adapt her game to the strong winds.

Heading into Saturday’s square off against No. 10 Texas A&M, Pollard felt the team needed to be collected on the court.

“We’re not the most composed group you’ve ever seen,” Pollard said. “And, you know, we play with a lot of passion, a lot of heart. It works for us, but it also can hurt us. So I think we’re gonna have to keep that under control and wraps tomorrow.”

The Cats lost to the Aggies in the second round of the NCAA with 4-2. Crowley had a solid showing in her singles match winning both sets 6-0 and 6-1, respectively. Once again, she and Byrne smashed their doubles match taking the set 6-3.

Junior Hannah McColgan and senior Caroline Pozo defeated their opponents in their doubles match at 6-4. But the team’s postseason run ended when Byrne dropped her set 6-4, 7-5, leaving Pozo’s match unfinished at 2-6, 6-2, 2-3.

This weekend’s championship wrapped up the season for the Wildcats with a 19-6 record.