The Daily Northwestern • May 10, 2021 • https://dailynorthwestern.com/2021/05/10/sports/mens-tennis-northwestern-defeats-no-23-ucla-but-cant-overcome-no-4-texas-in-ncaa-tournament/ 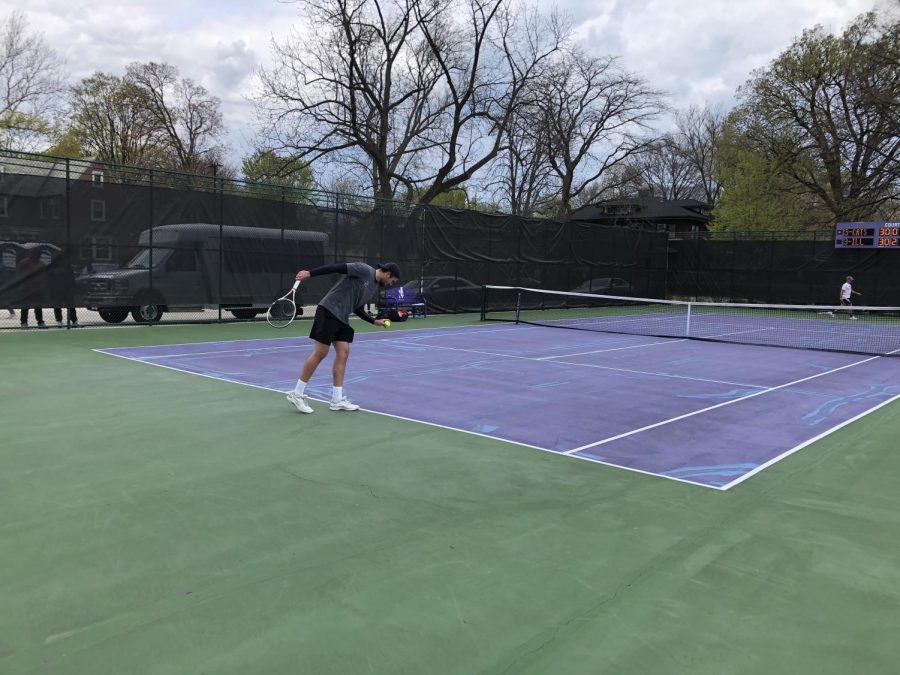 Nick Brookes prepares to serve. Brookes and doubles partner Simen Bratholm did not have their serve broken against Texas.

A one-of-a-kind season for Northwestern culminated in a second-round NCAA tournament loss to Texas on Sunday.

The Wildcats (14-8, 11-5 Big Ten) kicked off the postseason as the only unranked team to earn an at-large bid to the tournament. NU benefited from manual adjustments the selection committee made to the ITA rankings that sought to compensate for the Big Ten banning non-conference matches for most of the season.

The algorithm, which consistently ranked Big Ten teams below their placements in the Coaches Poll all season, drew some criticism for penalizing these teams for outside circumstances.

“It was great for us to prove that we deserve our place in the tournament, and finally play some of the more highly ranked teams in college tennis,” graduate student Dominik Stary said. “It was also great to try how we were going to match up against teams from other conferences.”

In just their second meeting ever with the Bruins, the Cats took down UCLA (13-7, 4-3 Pac-12) with four straight-sets victories in singles Saturday in Austin, Texas. The Bruins — the only team to qualify for every NCAA tournament since the current format was instituted in 1977 — hadn’t lost in the first round for 33 years until last weekend.

“Even though we lost the doubles point, it was closely contested,” coach Arvid Swan said. “Then, in singles, I think we played one of our best matches of the year.”

In doubles, the Bruins split with NU at No. 1 and No. 2 before capturing a tiebreaker at No. 3. It was the only point the Cats would concede all day.

Junior Trice Pickens posted the first result, defeating UCLA’s Roscoe Bellamy 6-4, 6-3. Then, Stary and freshman Presley Thieneman extended NU’s lead with their own victories. Stary credited strong play from the baseline and his serve for the 6-4, 6-1 win.

After junior Steven Forman drove a two-handed forehand past UCLA’s Govind Nanda to clinch the 4-1 win, the celebrations started on Court 1.

“They had the talent… but we were the stronger, more committed and more cohesive team,” Stary said. “After the match, (it) was just great emotions and a huge appreciation for what we’d done.”

A few days later, against No. 4 Texas (22-5, 4-1 Big 12), the site host and defending national champion, the Cats failed to secure the doubles point once again. Even though NU had four days to get acclimated for the crowds and 90-degree weather,the preparation didn’t make a difference in doubles. Forman and sophomore Natan Spear played their entire 7-5 match on serve before allowing a decisive break point.

It was the fourth straight time NU dropped the doubles point, following 12 consecutive conference matches where Swan’s squad earned the early advantage. Swan said the program prides itself on strong doubles play, and wants to work toward another winning streak come next season.

The Cats couldn’t rescue the match in singles, either. The Longhorns boast four nationally ranked players, but it was unranked Chih Chi Huang who notched the first individual victory for them, defeating Pickens 6-4, 6-3. Senior Nick Brookes was the next NU player to fall, and graduate student Chris Ephron’s loss handed the Longhorns a 4-0 sweep.

“It is a goal to advance the program to a point where we’re regularly in the Sweet 16, but there’s steps along the way,” Swan said. “We’re close. I feel like we just gotta keep knocking on the door.”

Looking to next season, NU’s roster will certainly look different. Stary, Brookes and Ephron are all exiting the program, each vacating a doubles slot and freeing up the No. 2, No. 3 and No. 4 singles positions.

While Swan said he won’t begin serious evaluations until fall, he hinted at expanded roles for Thieneman and freshman Gleb Blekher, who went a combined 16-2 at the No. 6 slot this season.

“We’re going to have to assess strengths of different players and how to put it together,” Swan said. “What chemistry works? That’s gonna be one of the biggest challenges for us in the fall.”