The Daily Northwestern • May 10, 2021 • https://dailynorthwestern.com/2021/05/10/sports/lacrosse-northwestern-receives-no-2-seed-first-round-bye-in-ncaa-tournament/ 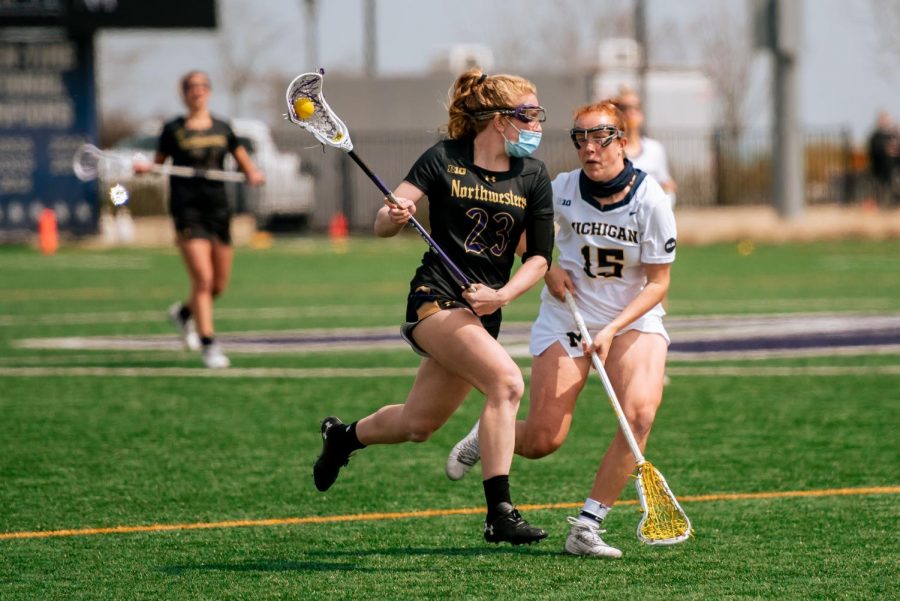 Graduate student attacker Lindsey McKone runs down field. McKone is one of three Northwestern players nominated for the Tewaaraton Award.

The No. 2 Wildcats (13-0, 11-0 Big Ten) received the No. 2 seed and a first-round bye in the 2021 NCAA Division I Women’s Lacrosse Championship during Sunday’s Selection Show. NU was an automatic tournament qualifier after securing the Big Ten Tournament title on Sunday May 2.

The Cats will host the first and second rounds of the tournament in Evanston, with Stanford and Denver competing at Lanny and Sharon Martin Stadium on Friday. The winner of that matchup will face NU at noon on Sunday.

The Cats are no stranger to the NCAA Championship. This is the 17th consecutive time NU has made the tournament and 22nd in program history. During the past 17 runs, the Cats have captured the national title seven times – all under the helm of coach Kelly Amonte Hiller.

NU has been led by junior attacker Izzy Scane, who ranks first not just in the program, but also nationally in goals, goals per game, points and points per game. She is supported by senior attacker Lauren Gilbert, and graduate student attacker Sammy Mueller,

The Cats’ defense has played a big role this season as well. Junior goalkeeper Madison Doucette has made 90 saves this season, achieving a .407 save percentage. Senior defender Ally Palermo and junior midfielder Allie Berkery have recorded double-digit numbers in ground balls and caused turnovers.

Several NU players have received national and conference recognition in 2021. Scane was named the Big Ten Attacker of the Year. Additionally, Scane, Gilbert and graduate student attacker Lindsey McKone were all named nominees for the Tewaaraton Award, a recognition annually given to the top player in college lacrosse.

NU looks poised to make yet another tournament run, achieving its strongest start since 2009 with a perfect 14-0 record. The Cats also lead the nation in scoring offense, points per game and draw controls per game.