The Daily Northwestern • May 9, 2021 • https://dailynorthwestern.com/2021/05/09/campus/nucnc-holds-abolitionist-noise-demonstration-in-solidarity-with-cheerleaders-calling-for-polisky-reconsideration/ 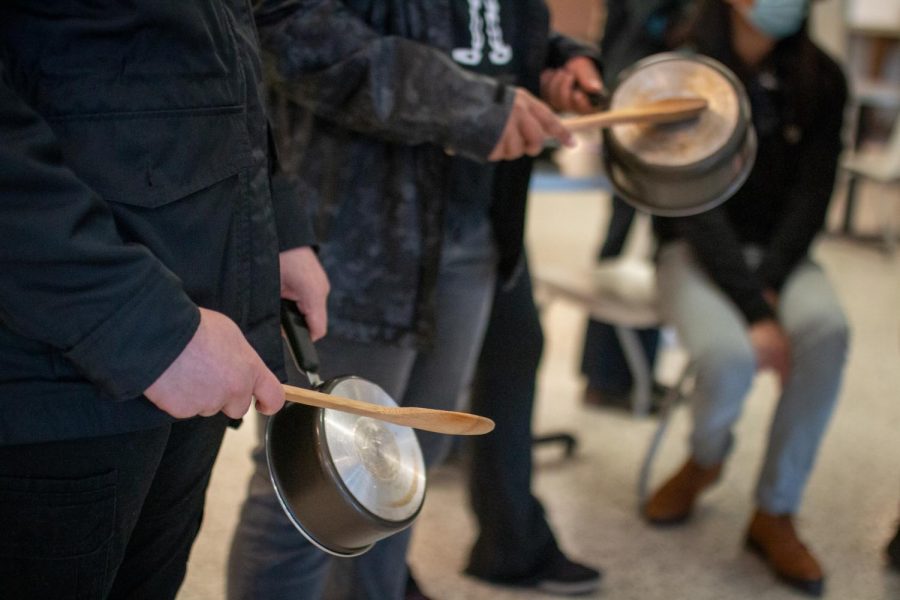 Ringing cowbells, clanging pots, pans and bowls and playing music from speakers, about 75 students gathered on the steps of Deering Library Saturday to protest in solidarity with Northwestern cheerleaders and for police abolition.

The NU Community Not Cops action came just a day after NU and Evanston community members marched to University President Morton Schapiro’s house to protest the appointment of Mike Polisky as the University’s next athletic director.

Polisky was named as a defendant in a sexual harassment case filed in January by a member of NU’s cheerleading team, and members of the team also claimed in a February Daily investigation that Polisky did not appropriately respond to anti-Black racism.

“We know that in order to be committed to the level of safety and community care we are demanding of the University, it would require them to center the needs of those who are victims of gender- and sexuality-based violence,” an NUCNC organizer said. “Center survivors in abolition.”

There were no police officers in the direct vicinity of the protesters, who remained on campus as they walked from Deering to Norris University Center. Two unmarked Evanston Police Department vehicles were present by Foster-Walker Complex at the start of the action.

Saturday marked 337 days since NUCNC and affiliated organizations sent a petition to University administration demanding divestment from policing and investment in life-giving institutions for Black students. May 3 also marks the 53rd anniversary of the start of the Bursar’s Office Takeover, in which Black students held a 38-hour demonstration after administrators didn’t meet their demands in response to discriminatory campus policies.

Once the protestors reached Norris, they approached the first floor by Norbucks, gathering around the common area in front of the television. Protestors made noise hitting pots and pans, ringing cowbells and playing music.

“Despite surface-level claims and buzzwords, the University is showing with their actions that they are not committed to any meaningful level of care and support,” an organizer said. “When will they care about us?”

After speaking, organizers thanked the Norbucks staff and headed to the ground floor, circled the area and stopped by MOD.

An organizer said NUCNC also stands in solidarity with international organizers in Palestine and Colombia, adding that the movement to dismantle oppressive structures exists beyond campus.

The group then moved to the lawn behind Norris, where an organizer read a statement from an anonymous NUCNC member who said the first time many community members heard about the mistreatment of cheerleaders was at an NUCNC march at Ryan Field.

At the October 2020 protest, a speaker stepped up to the microphone to discuss the racism they experienced within NU Athletics, the NUCNC member said in the statement.

The response that followed, they said, demonstrated how NUCNC actions have created a space where students feel safe discussing the violence they’ve faced at the University.

“We’ve been reflecting on how … folks have been modeling at actions what communities of care look like,” the NUCNC member said. “The fact that everyone validated this person, followed up with this person and checked on them shows that we protect each other. The school doesn’t.”