The Daily Northwestern • May 6, 2021 • https://dailynorthwestern.com/2021/05/06/sports/softball-northwestern-headed-to-purdue-for-last-road-series-of-regular-season/ 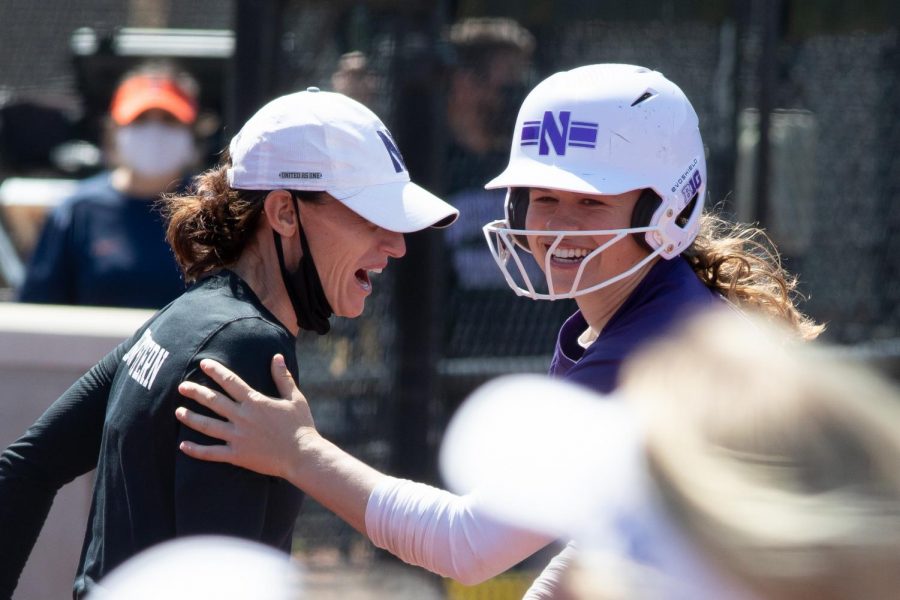 Head Coach Kate Drohan and graduate utility player Morgan Newport embrace after Newport’s walk off homer against Illinois in the second game of the series. Northwestern will face Purdue this weekend in its final road series of the season.

After splitting last weekend’s games against Illinois, Northwestern will travel to West Lafayette, Ind. for its final road series of the regular season against Purdue.

The two teams have gone in completely opposite directions this year.

It is clear NU has learned from their mistakes this season, especially at the plate. After facing a dynamic Michigan pitching unit two weeks ago, the Cats bounced back by batting .284 with at least six hits each game and six home runs — a series high — against the Fighting Illini.

Leading the charge of the Cats’ offense is the 1-2-3 punch of junior center fielder Skyler Shellmyer, senior second baseman Rachel Lewis and Rudd. Shellmyer and Lewis rank in the top five batting averages in the conference — with .389 and .346, respectively — while Rudd ranks 11th at .342 .

NU also leads the Big Ten in runs, triples and RBIs and sits at third in batting average. Now, coming off their nine-hit game Sunday, the team faces a Boilermakers pitching staff that allows the most runs and second-most walks in the conference, and holds the Big Ten’s third worst ERA at 3.91.

“(Sunday) was a really great way to propel us into the next weekend,” graduate utility player Morgan Newport said. “We did a great job of creating energy, creating momentum, and capitalizing on it.”

The Cats brought the energy on the mound against Illinois as well. The team’s pitching performance was highlighted by junior pitcher Danielle Williams’ 20 strikeouts through two complete games on Friday and Sunday and sophomore pitcher Sydney Supple’s seven hits over 9.2 innings.

“Our pitchers did really well at working to control their pitches and make sure that no one was on base,” Rudd said.

Looking towards the Purdue dugout, the group sits in the middle of the pack, holding the seventh best batting average in the Big Ten. However, the Boilermakers do feature the hottest bat in the conference in Rachel Becker, who is batting an astounding .483 on the season — the 10th best in the nation.

With two weeks left of regular season gameplay, the series against Purdue and Nebraska are must-wins for NU, as the top three teams in the Big Ten will be awarded a ticket to the NCAA Tournament. Currently, Northwestern stands only two games ahead of the fourth-seeded Fighting Illini.

“A lot of people are really coming around right now,” said coach Kate Drohan. “(Sunday) walking off the field, our team is a lot better, stronger, and more prepared for what is ahead than when we took the hill on Friday.”

— Softball: Northwestern looks to bounce back against Illinois after losing series against No. 19 Michigan

— Softball: Northwestern falls to No. 1 Michigan over the weekend, creates a three-game losing streak