The Daily Northwestern • May 5, 2021 • https://dailynorthwestern.com/2021/05/05/sports/lacrosse-the-historic-rivalry-between-maryland-and-northwestern/

Lacrosse: The historic rivalry between Maryland and Northwestern 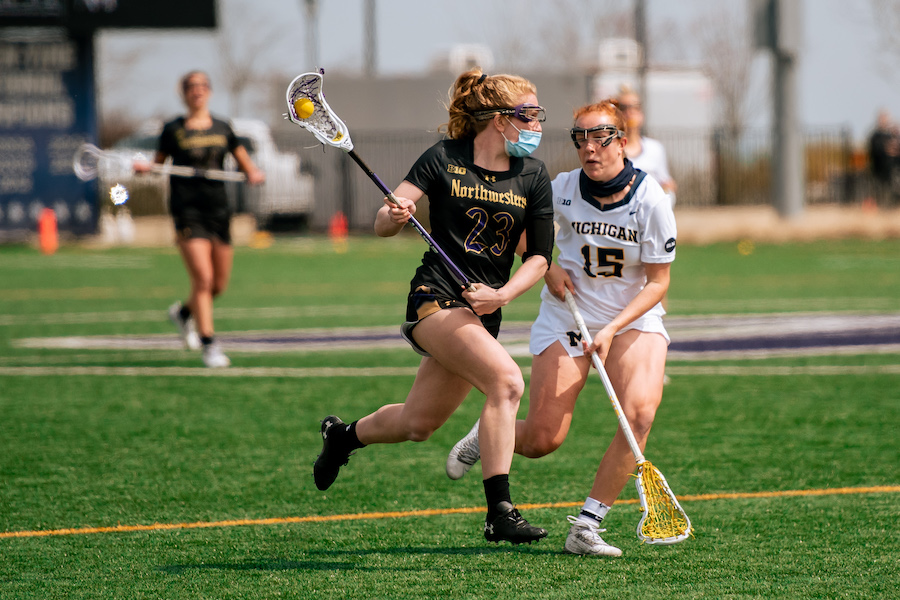 It was raining when Northwestern won its first Big Ten Tournament title in program history in May 2019. Fans wore ponchos and even the trophy was protected under an umbrella.

However, the weather didn’t stop the Wildcats from playing their hardest. NU dominated the entire game against Maryland, leading 10-4 at halftime and en route to a 16-11 victory.

Beyond the trophy, the dismal weather and the history made, another part of the game stood out to the Cats: the win came over Maryland.

“This awesome energy we brought on the field that day completely blew them out of the water,” graduate student attacker Lindsey McKone told The Daily about the game. “We just clicked and we knew that all the hard work and all the adversity that we’d gone through as a team led us to that moment.”

Over the past two decades, the Maryland-Northwestern rivalry has emerged as one of the most contested in women’s college lacrosse, both on the national and conference levels. NU has won seven of the last 15 NCAA Division I Women’s Lacrosse Championships, while the Terrapins have won five. Since the founding of Big Ten women’s lacrosse in 2015, Maryland has won three Big Ten Tournament titles to the Cats’ two.

“If you said a few years ago that we were going to beat Maryland three times in one season, a lot of fans, a lot of people would laugh,” coach Kelly Amonte Hiller said.

And the Cats did not just defeat the Terrapins three times this season — they also did so by decisive margins. NU overtook Maryland by double digits in both of their matchups in March. The teams played a narrower game during the Big Ten Tournament, but NU still won by five goals.

Amonte Hiller credited previous teams with laying the foundation for consecutive wins against Maryland. Building up the team’s culture over several seasons, she said, helped them get to this point and this year’s players have been the beneficiaries of seasons of hard work.

“It’s exciting for the alumni to know they’ve had a part in getting us back to this point,” Amonte Hiller said.

McKone said in previous years the Cats focused on their opponents when preparing for games. This season, the team has looked internally to stay calm ahead of crucial matchups.

“In the past, we’ve always hyped up the games against them because it is a rivalry game,” McKone said. “This year, we stayed even-keeled and knew if we played our best lacrosse we would be able to win. It’s hard to beat anyone three times, so beating a team like Maryland three times in a season is great.”

Junior attacker Izzy Scane played a key part in all three of NU’s wins over Maryland this season, scoring a combined 14 goals during the programs’ pair of games in March and nine more goals when they met in Sunday’s Big Ten Tournament title game. She said winning against the Terrapins is “so much more fun” than typical games since the team’s coaching staff and the players are so talented and the matchups are so competitive.

Amonte Hiller agreed with the sentiment, saying the best part of the rivalry is how the programs bring out the best in each other.

“Despite a win or loss, the competition is great,” Amonte Hiller said. “You know it’s going to be a highly contested game and a lot of emotion and focus on the line. Anytime you get to play a really great opponent, it helps you get better. And regardless of winning or losing, to have the opportunity is a gift.”