ETHS students reflect on equity work in the classroom 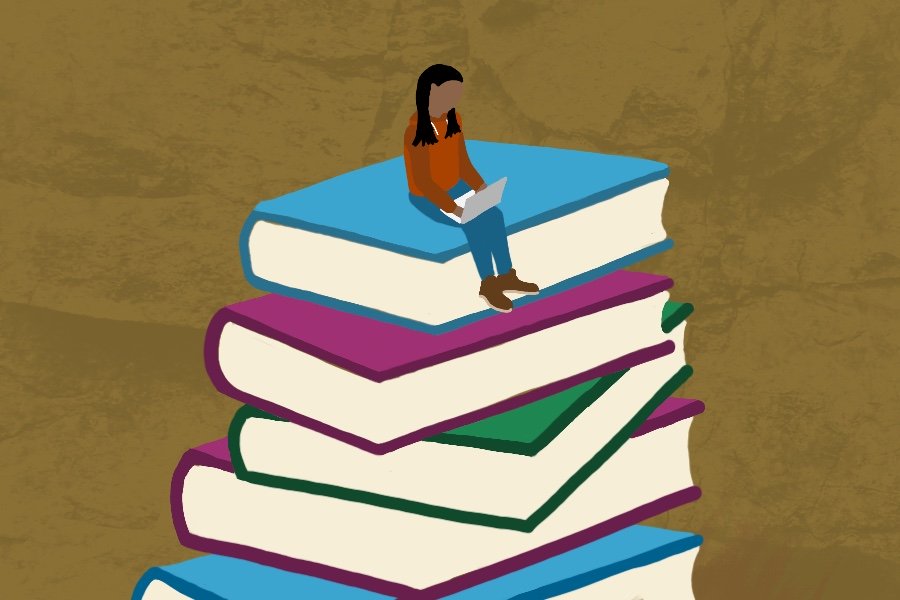 As students notice greater equity and diversity within the ETHS curriculum, they hope that even more teachers and administrators will commit to updating their curricula.

Her teacher, Corey Winchester, taught Black, Asian American and Chicano history units. She was pleasantly surprised when he also spent multiple months covering Haitian history. For Parisien, who is Haitian, this was her first experience learning about her own culture in school.

Parisien is part of a growing community of ETHS students and student activists calling for more diverse and equitable education within ETHS.

Student activist groups including Evanston Fight for Black Lives and Students Organized Against Racism have been invited into ETHS classrooms to speak about antiracist education.

“(ETHS) want(s) students to feel included, and they want multiple versions and versatile history being taught and shown in classes,” Parisien said. “But it just really lies within the teacher. It’s less in the curriculum that was created.”

One of the biggest changes that ETHS junior Eden Drajpuch has experienced this year is a sense that most of her teachers, especially recent English and history hires, actively integrate equity into classroom discussions and coursework.

In their art history class, ETHS senior Nora Miller enjoyed conversations  about owning art in the context of colonization. She has discussed current events in her literature class, a space they usually feel is dominated by White writers.

Teachers outside of the social sciences have also made their mark. Drajpuch and ETHS sophomore Ahania Soni remember their chemistry teacher discussing current events and highlighting female scientists. Some teachers have included supplementary readings and videos that expand beyond the perspectives highlighted in their main textbooks, Soni said.

“It was incorporated into the curriculum, rather than shoved in, which I really enjoyed,” Soni said.

Some classes are harder to revise, especially AP courses, which lack cultural narratives in the standardized curriculum. Winchester still found a way to incorporate Indigenous history in his AP U.S. History class, which Drajpuch said she was happy to see.

“(Winchester) does a good job of emphasizing that history we haven’t necessarily learned about until this year is still just as important,” Drajpuch said. “Everything that shows up on that exam isn’t everything that happened.. in American history.”

A group of students and equity analysts founded in 2018 has also begun releasing the results of internal ETHS curricular reviews. The reviews summarize the equity analysts’ findings from conduct focus groups that asked individual classes of students to reflect anonymously on their experiences in subjects like history, english and spanish.

The review committee then analyzes classes’ input and has begun to recommend curricular changes to improve students’ experience. Miller, who has been involved in the ETHS internal curriculum review group, said she finds the formal review process to be “slow and bureaucratic,” and it doesn’t focus enough on student feedback, which they said is important to creating lasting change.

For many, including Soni and Miller, it’s important that classroom discussions surrounding equity take place in safe spaces. Comfort can be difficult to achieve in a remote setting, however. Soni finds that some students are unwilling to share personal or vulnerable experiences, and overall are more quiet, over Zoom.

Another barrier to productive discussions is that ETHS students tend to share very similar political views, Miller said. This can create an echo chamber when classroom discussions align with traditionally liberal values, they said, and can create an unnecessarily political environment when they don’t.

Miller, who is Black and Mexican, feels that to avoid controversy, some teachers have passed on opportunities to include units about histories that reflect her own identities and the identities of their peers.

Parisien said teachers of color have provided her the most support in learning about her own histories. Among the classes she feels prioritize diversity, she said there has been numerous opportunities for students to learn more about topics of their choice. One of her favorite projects, which was assigned by civics teacher Yosra Yehia, invited students to do long-term research on a social issue which they were passionate about.

“ETHS is super, super resourceful,” Parisien said. “But at the same time, they expect students to advocate for themselves.”

Miller looks forward to a future where curricular diversity at ETHS is universal, relying less on exam incentives and personal teaching philosophies.

They feel the ETHS administration has been supportive so far, which she hopes will encourage teachers to focus on expanding equity in their classrooms.

“It’ll take a few years for all of the teachers to feel the necessity to include more histories in a curriculum,” they said. “It will hopefully get to a point where it’s just commonplace…that the content that’s being taught is representative of the people in our high school and the histories of people in our school.”