The Daily Northwestern • May 3, 2021 • https://dailynorthwestern.com/2021/05/03/sports/softball-northwestern-splits-series-against-in-state-rival-illinois-in-evanston/ 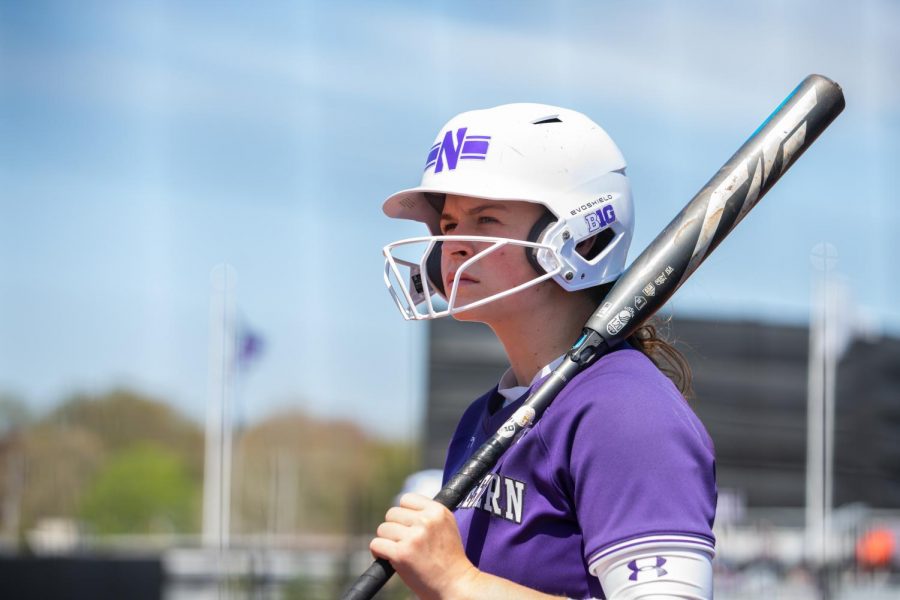 Graduate student utility Morgan Newport gets ready to bat. She hit a walkoff home run in the first game of Saturday’s doubleheader against Illinois.

At the bottom of the seventh inning, with Northwestern down 6-5 to Illinois, graduate utility player Morgan Newport went up to bat.

She then hit a walk-off home run, securing the Cats a win in the first game of Saturday’s doubleheader against the Fighting Illini. After NU’s loss Friday’s against Illinois, Newport said the home run walk-off was a boost the entire squad needed.

“I was just trying to see the ball and hit hard,” Newport said. “I tried to keep it simple and it worked out for the team so that’s awesome.”

NU opened the series slow, struggling to get its offense in motion on Friday. The team scored its first run in the fifth inning in a 4-2 loss. Coach Kate Drohan said the squad wasn’t aggressive enough in the early innings, but praised the team’s quick adjustments later in the matchup.

The Cats did just that for the rest of the weekend, bringing in 10 runs across the rest of the series. Newport led the team with seven RBIs and two home runs, including the walkoff that put NU back in the win column.

She said Friday’s loss fueled the team going in the rest of the weekend offensively.

“It was just setting aside those previous at bats where we felt like we failed and taking the positives that we have from (those chances),” Newport said.

Drohan praised the trio and pointed out Cady’s growth during the season as a first year player. She said the freshman had a “breakout weekend” and has worked hard to get playing time.

NU was solid defensively, shutting out the Fighting Illini for consecutive innings in multiple games. Newport, who pitched four innings this weekend, said it felt great to fuel the defense and silence Illinois’ lineup.

“I don’t strike people out so it’s great to feed my defense and have them make the plays for me,” Newport said. “That’s how this team builds momentum.”

Junior pitcher Danielle Williams fueled the offense with her strikeouts. The California native totaled 20 in two complete games and allowed zero walks during the weekend.

Additionally, sophomore pitcher Sydney Supple stepped in for Newport and pitched a complete game in Saturday’s doubleheader. She had three strikeouts and only one walk.

The Cats finished strong Sunday by defeating Illinois after a tough loss in the second game of Saturday’s doubleheader. Junior catcher Jordyn Rudd said the team adjusted from the loss and came back aggressive, adding that she felt the Illinois series allowed the team to improve.

With the Cats set to face No. 12 Purdue next weekend in the last road series of the season, Rudd knows that she and her teammates have to be locked in.

“We are going to continue working on our pitch selection, being aggressive and physical on the field (for next weekend),” Rudd said.

— Softball: Northwestern prepares for crucial conference matchup against No. 20 Michigan