The Daily Northwestern • May 3, 2021 • https://dailynorthwestern.com/2021/05/03/sports/football/football-seven-northwestern-players-sign-with-nfl-teams-as-undrafted-free-agents/ 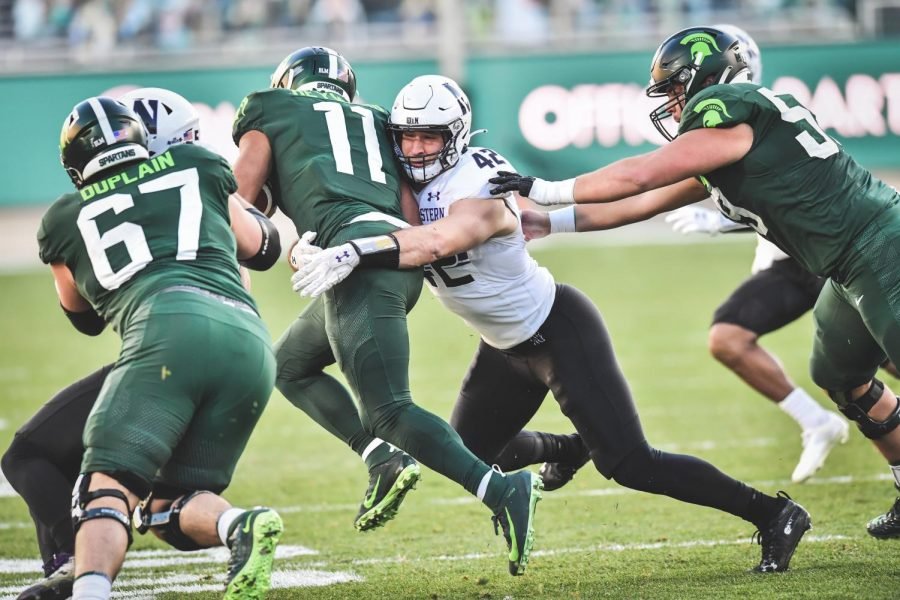 Paddy Fisher makes a tackle. The linebacker was one of seven Northwestern players to sign with NFL teams as an undrafted free agent.

Currently, only one NU player who entered the 2021 NFL Draft remains unsigned: wide receiver Ramaud Chiaokhiao-Bowman. The Minnesota native had a career season in 2020, reeling in 41 catches for 508 yards and five touchdowns.

Fisher, who is heading to Charlotte, is one of the best linebackers to ever don the purple-and-white. Fisher left Evanston as the NCAA’s active leader in career tackles (404) and forced fumbles (11). He also was named the 2020 Big Ten Fitzgerald-Butkus Linebacker of the Year after making 86 tackles and 4.5 tackles-for-loss, forcing a fumble, recovering a fumble and notching an interception.

Fisher also became the first Cats player since current Cleveland Browns linebacker Anthony Walker Jr. to finish with 100 tackles in consecutive seasons. After notching 113 takedowns his freshman season, Fisher made 116 tackles — the eighth-most in the conference — during his sophomore campaign in 2018. He earned a nod on the All-Big Ten First Team from the conference’s coaches for his performance.

After helping lead the Cats to a 7-2 record and a victory in the 2021 Citrus Bowl, Fisher received the 2021 Lott IMPACT (Integrity, Maturity, Performance, Academics, Community and Tenacity) Trophy.

Fisher joins a linebacking corps in Carolina headlined by former first-round picks Haason Reddick — who racked up 12.5 sacks in 2020 — and Shaq Thompson, who is coming off two straight seasons of 100 or more tackles. The Panthers did not draft a linebacker, meaning Fisher will compete against players such as Chris Orr, Clay Johnston and Daniel Bituli for a roster spot.

Ramsey, who is also joining the Panthers, transferred to NU after four seasons at Indiana and brought stability to a quarterback room that had one of the worst scoring offenses in the country in 2019. Ramsey earned a consensus selection to the All-Big Ten Third Team after throwing for 1,733 yards and 12 touchdowns last season.

His best game for the Cats came in his final one. In the Citrus Bowl, Ramsey completed 24-of-35 passes for 291 yards and four total touchdowns to earn the game’s Most Valuable Player award. Over nine contests, he threw for 200 or more yards six times and led NU to its first undefeated home record since 1995.

Ramsey joins Carolina signal-callers Sam Darnold, Will Grier, Tommy Stevens and P.J. Walker. Darnold, the No. 3 overall pick in 2018, is the Panthers’ presumed starter after Carolina traded for him in March.

Heading to the Panthers’ NFC South rival are Pace — a College Park, Ga. native —  and Raine.

One of the Cats’ leaders during the 2020 season, Pace racked up 41 tackles and made one interception to earn an All-Big Ten Honorable Mention. He finished his career in Evanston with 169 tackles, eight interceptions and 23 pass deflections.

In his single season with NU, Raine caught 24 passes for 233 yards and two touchdowns. His best performances came against Maryland during the regular season (5 catches for 53 yards) and Auburn in the Citrus Bowl (six catches for 76 yards and a touchdown).

Gallagher is headed to Baltimore after racking up 332 tackles, five interceptions and two fumble recoveries for the Cats. His strongest performance came in 2018 when he notched 127 tackles — the most in the conference. Gallagher followed it up by earning the second-most total tackles on the team with 88 in 2019.

The Massachusetts native joins a strong Ravens linebacker group that already has talented players like Patrick Queen — a first-round pick in 2020 who finished last season with the second-most tackles by a rookie (66).

Lees will join Gallagher in the AFC North after finishing his Northwestern career with 111 catches for 1,093 yards and nine touchdowns. In addition to playing at receiver, the Libertyville native served as a rusher and a quarterback, as well as a kick and punt returner.

In 2019, Lees had a standout season fielding kickoffs — he averaged 22 yards per return and ran for a career-high 50 yard return. Lees did not return kickoffs in 2020, but still remained a punt returner. In his four seasons catching punts, Lees averaged 7.1 yards per return on 53 returns.

With the Bengals, Lees’ special teams skillset may help him stand out amid a crowded wide receiver room.

Meanwhile, Vogel will start his NFL career less than an hour away from Evanston with the Bears. After redshirting his first season and then playing in seven games over the next two years, Vogel started nine contests in 2019. He then started every game of the 2020 season and helped the Wildcats average over 360 yards per game.

In Chicago, Vogel will join former Ohio State quarterback Justin Fields, who was drafted by the Bears 11th overall.