The Daily Northwestern • May 3, 2021 • https://dailynorthwestern.com/2021/05/03/multimedia/audio/everything-evanston-a-year-of-loss-and-unity-for-local-businesses/

Everything Evanston: A year of loss and unity for local businesses 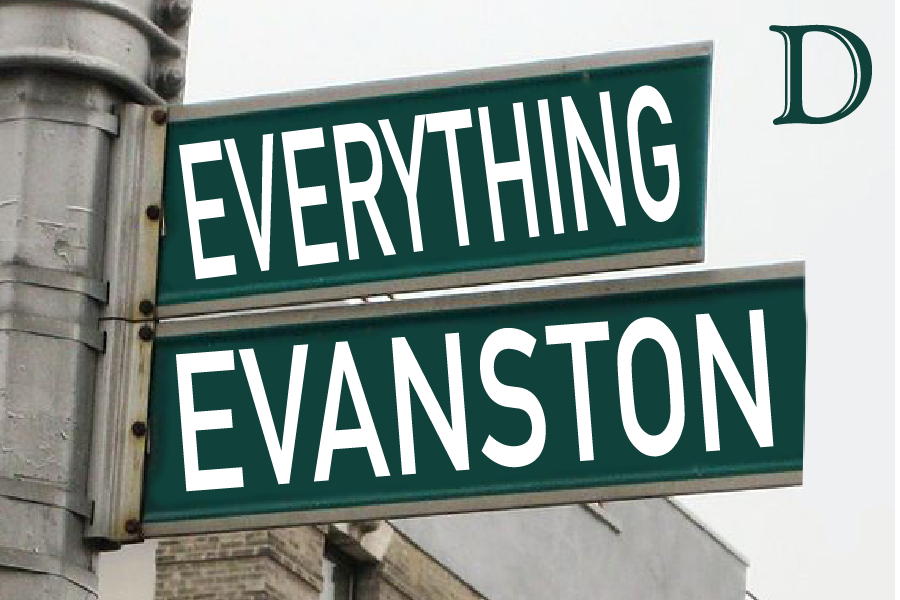 Ali McCadden and Maia Spoto
”>
The Daily Northwestern · Everything Evanston: A year of loss and unity for local businesses

Evanston’s business scene looks a lot different today than it did one year ago when COVID-19 began, and even more different than it did decades ago. The Daily sat down with Evanston business owners and residents and asked them what changed, how they’re handling the pandemic and what’s in store for Evanston’s future.

JENNIFER EASON: It did feel like we were coming to a point of being on solid ground at the restaurant. Then it just dropped, you know? All the progress we made, it seemed like it was gone. I was so tired and I was just like, I can’t do this again.

ERIKA CASTRO: I was crying. When you just pack up everything and throw everything away, it’s like — your dreams are there. Everything you put into having this place open, it’s in a box, and it’s like, ‘It’s over, your dreams are over.’ All of the sacrifices that you did are nothing.

MAIA SPOTO: Andy’s Frozen Custard, Barnes & Noble, Burger King, Century 12 Theatre, La Macchina Cafe, Panera Bread, Unicorn Cafe, Whiskey Thief Tavern. These are just eight of the dozens of Evanston businesses that have shut down since the start of the pandemic. Across the city, local business owners are continuing to struggle with an economic recession and a rapidly declining customer base, as well as concerns for the safety of their families and their loved ones. Many local businesses couldn’t make it, and many are hanging on by a thread.

ALI MCCADDEN: We sat down with local business owners and residents and asked them how their lives have changed over the past year, and what’s in store for the city’s future. From The Daily Northwestern, I’m Ali McCadden.

JEFF GARRETT: I do remember after my parents dropped out of Northwestern, because they had a child to feed — me — that as a two and a three year old, I would accompany my father on walks through campus. He sold sandwiches to Northwestern students.

ALI MCCADDEN: That was Jeff Garrett, an NU Librarian Emeritus who was born and raised in Evanston in the 1950s, and has lived on the North Shore since 1995.

JEFF GARRETT: The business scene in Evanston underwent a very profound change and degradation in the late 60s, early 70s, when Old Orchard was built, Old Orchard being the big shopping center out in Skokie. All the department stores, the bigger businesses shut down, so Evanston sort of recovered, but sort of never did. Commerce in Evanston began to recover in the 90s and the 20 aughts, but fast forward then to COVID and a huge amount of retail has shut down in downtown Evanston.

JEFF GARRETT: It’s a real shame because, you know, Evanston used to have almost no restaurant culture in the days before alcohol had been legalized in the city. And then just in the recent 10 or 20 years, restaurants had boomed. And now they’ve just been wiped out.

ALI MCCADDEN: Jeff has first-hand experience with Evanston businesses not only as a former resident, but as the husband of an Evanston business owner: Nina Barrett. Jeff told me that despite all odds, Nina’s bookstore Bookends and Beginnings actually flourished in the pandemic.

MAIA SPOTO: But like Jeff said earlier, the pandemic has dealt a difficult blow to Evanston’s restaurant and cafe owners.

LARRY MURPHY: We have a plaque on our wall which says, “friends and family gather here.”

MAIA SPOTO: That plaque sums up YoFresh’s brand: community. The walls are covered with photos of families and friends visiting the restaurant. It’s a comfortable place for birthday gatherings, school celebrations, date nights — people have even thrown engagement parties at YoFresh.

LARRY MURPHY: Well all of that, of course, was interrupted, because we couldn’t be that gathering space anymore.

MAIA SPOTO: Despite customer traffic being only a shadow of what it used to be, Larry said the YoFresh community rallied around the business during the beginning of the pandemic. People were buying $7 sandwiches and handing their cashiers $20 bills, telling them to keep the change. And the GoFundMe campaign Larry and Jean launched has raised almost $40,000 dollars.

ALI MCCADDEN: Larry also said starting last spring, after a heightening of the Black Lives Matter movement, there’s been a push from local organizations and residents to support Black-owned businesses. He said the effort seems way more intentional than in previous years.

LARRY MURPHY: It’s been quite apparent to us — whether people are overt or implicit about it — that some of what we receive is a result of people wanting to support a Black business. My wife and I feel very positive about it, to know that there is that sense of commitment to higher and deeper values and ideals of relationality that could extend to the variety of identities in our town.

MAIA SPOTO: While the future isn’t set in stone, Larry’s feeling optimistic. Other business owners aren’t feeling quite as hopeful.

MAIA SPOTO: Gyros Planet is on the corner of Dodge Avenue and Church Street, right across from Evanston Township High School. About 75 percent of its revenue comes from ETHS foot traffic. So when the school closed its doors and stay-at-home orders went into effect, the future felt grim.

ERIKA CASTRO: Even though we were struggling, there were a lot more people struggling even harder than us. I talked to my husband: “If we are going to close the restaurant, we need to do something for the community.”

ALI MCCADDEN: From May to December, Gyros Planet gave out more than 25,000 meals to local families. Erika said they were feeding about 110 families every single day. Resident donations and grants from the Evanston Community Foundation Rapid Response Fund supported the efforts, but grant funding ran out in December, and their business took a turn for the worse.

MAIA SPOTO: Erika and her husband were pouring their savings into the restaurant, but in the end, they couldn’t pay the bills. So they made the call to close Gyros Planet. Their lease was turned over to a new owner. Erika and Pablo didn’t have space to store their equipment, so they had to throw it all away.

ERIKA CASTRO: I was crying. When you just pack up everything and throw everything away, it’s like — your dreams are there. Everything you put into having this place open, it’s in a box, and it’s like, ‘Your dreams are over.’ All of the sacrifices that you did are nothing.

ALI MCCADDEN: But Evanston residents came together to support Erika and Pablo. They raised over $60,000 on GoFundMe. The landlord broke the lease with his new tenant, and Erika and Pablo were allowed to keep the space.

MAIA SPOTO: But they’re not out of the woods quite yet. The equipment they had to throw away? It was worth more than $25,000. And when the landlord returned the lease, he also asked Erika and Pablo to pay for an entire year of rent.

ERIKA CASTRO: We are so happy to be able to be here, and have the opportunity to keep running the restaurant. But we are still struggling. We still need the community. It’s not just about Gyros Planet. It’s really heartbreaking to see how many businesses are closing already in Evanston. Businesses are essential in the community.

ALI MCCADDEN: Between all of the business owners we talked to, we noticed a common theme: a focus on community. Over the past year, it seems like business owners have been reimagining what it means to be in community — both with Evanston residents and with fellow entrepreneurs.

JENNIFER EASON: The restaurant industry in itself is an oversaturated industry and there’s a lot of competition. Like, a huge amount of competition. But I think that as restaurant owners, we are more collaborative now, and not so much competitive. We came together at the height of the pandemic.

MAIA SPOTO: That’s Jennifer Eason, the owner of Jennifer’s Edibles, a family-style restaurant on Simpson Street that serves American and Jamaican soul food. Up until the pandemic hit, Jennifer’s business was booming. It felt like Jennifer’s Edibles was finally on solid ground.

JENNIFER EASON: Then it just dropped, you know? All the progress we made, it seemed like it was gone. I was just so tired. I was like, I can’t do this again.

ALI MCCADDEN: Jennifer and her team made a plan. They were going to donate meals to five people a day until their inventory ran out, and then close up shop. But on the first day of distribution, 18 people showed up.

JENNIFER EASON: And then it just kind of snowballed. And then people heard about it. And they were like, “Oh, this is great!” and just started sending money. “I want to sponsor a senior!” and “I want to pay for my aunt!”

ALI MCCADDEN: Word spread, and her operations were thriving. Between March and July, she and her team were feeding 200 seniors every day.

MAIA SPOTO: We asked Jennifer what she remembers most about those few months.

JENNIFER EASON: I think it was a day we were just in here, everybody was exhausted and we just got really, really silly. I mean, everybody. It was a great team. Some of the volunteers were bringing their kids too, so we were just all in here, just cracking up. And I don’t even know why.

ALI MCCADDEN: Even during some of the pandemic’s most isolating months, Jennifer was able to create community.

JENNIFER EASON: I took a step back for a moment from the senior program, until we could get the not-for-profit stabilized and sustainable. So that’s what I’m working on now — it will go past the pandemic.

ALI MCCADDEN: But not every Evanston small business was able to bounce back after COVID hit. Unicorn Cafe, the Sherman Avenue coffee shop loved by Northwestern students and Evanston residents alike, shut its doors indefinitely in September.

MAIA SPOTO: Former owner Jessica Donnelly said that she initially thought the Unicorn would close down permanently in March at the beginning of the pandemic. But since coffee shops were considered essential businesses by the state of Illinois, she stayed open from 7-10 a.m. to help Evanston residents get their coffee fix. Ali and I were able to jump on the phone with Jessica earlier this week.

JESSICA DONNELLY: So I thought, well, something I could do for my community, and for my customer base, was to at least be open in the mornings when people would want coffee.

ALI MCCADDEN: Ultimately, though, Jessica’s regulars weren’t enough for the business to stay afloat. She told The Daily that bigger corporations like Colectivo or Starbucks had more resources and were able to weather the storm better.

JESSICA DONNELLY: It is, of course, unfortunate that COVID was sort of the final sentence on the page. But it wasn’t a tragic end, given everything happening in the world, and it was a really wonderful sort of tide of change because of how supportive and loyal and generous all of the Unicorn customers were to the very last second of that business.

JESSICA DONNELLY: I don’t really think I’ll be in Evanston for a lot longer, I don’t know, but It’s not what it used to be when I first moved here. I thought this was the greatest town in America. And now, it’s a great town, but there’s a lot of places in the world I’d like to maybe hang my hat for a while, so we’ll see.

— Everything Evanston: Life Under the Stay-At-Home Order

— “A home away from home”: Jennifer’s Edibles celebrates hard work