The Daily Northwestern • May 3, 2021 • https://dailynorthwestern.com/2021/05/03/campus/nu-alumnus-amar-shah-named-universitys-first-hindu-chaplain/ 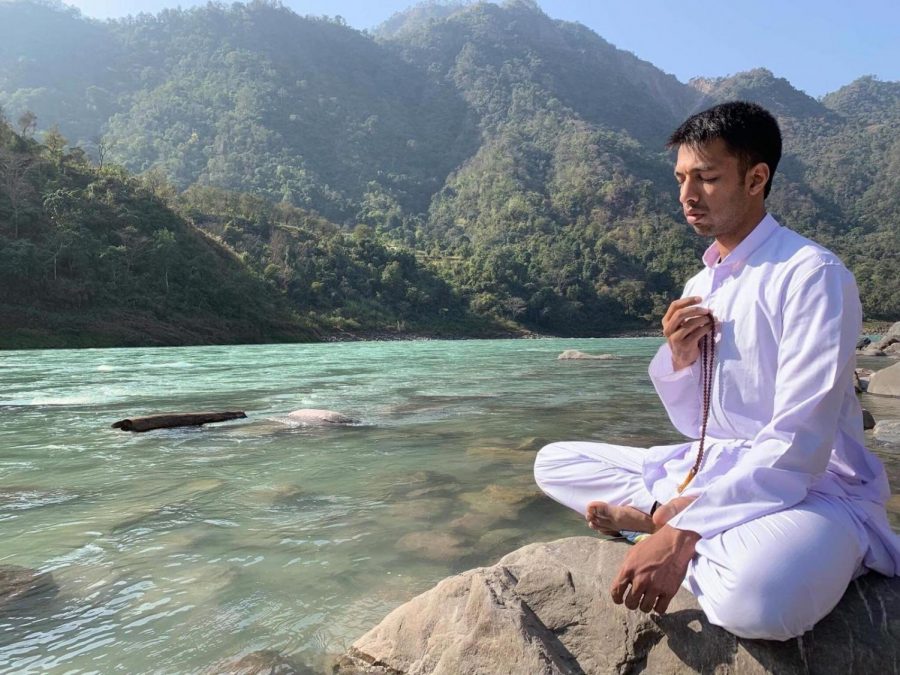 Surrounded by the views of the River Ganga in the Himalayas, Shah practices his meditation in 2019.

Following graduation, Shah studied as a Hindu monk for two years, and now wants to share the knowledge he acquired in his training, he said. Shah added that his main goal as chaplain is to provide pastoral care and guidance through a Hindu perspective.

“I see my role as more of a translator between past and present,” Shah said. “I then hope to be able to care for and provide a little bit more of a backbone and support in the community that we know could use it right now, particularly in light of mental health concerns due to the pandemic.”

Shah was announced as Hindu chaplain in late April, after students had advocated for the creation of the position since fall 2019. Shah said that he is looking forward to the opportunity to contribute to spiritual life at Northwestern and serve the greater community.

At Northwestern, Shah studied economics and global health and was involved in several cultural groups on campus, including South Asian Students Alliance and South Asian fraternity Alpha Iota Omicron, which has since disbanded, according to Shah. However, he said there “lacked” a conscious effort for more Hindu representation during his time at NU.

“I really do think that he will be able to help Hindu students, both undergraduate and graduate at Northwestern grapple with their religion and be able to explore their curiosities when it comes to what religion means to them,” Thakkar said.

As co-president, Thakkar has been communicating with administrators for over a year about creating a Hindu chaplain position on campus.

Over the past year, Shah has guided discussions with students through OM at Northwestern. Students in the group read chapters of “Self Unfoldment,” a book about one of the fundamental principles of Hindu philosophy and meet virtually each week to discuss its relevance to everyday life.

Shah said he hopes these contemporary understandings bring awareness to the rich tradition and knowledge in Hinduism.

“Now, context has changed,” Shah said. “Back in the ancient (times), we have a lot of value, but unfortunately due to degradation through time, misunderstandings can arise. We shun the entire body of knowledge altogether wherein the culture simply needs to be modernized, and wrong thinking needs to be clarified.”

Modi said that since Shah is an alumnus, he understands the struggles of being a Northwestern student, which allows him to give pinpointed guidance.

“(Shah) is very relatable,” Modi said. “That makes all the difference when looking for a mentor or role model to look up to. He has knowledge of (Northwestern), and I think that makes him very relatable and very approachable at the same time.”

With the new position Shah will take on, he hopes to help build a safe space for Hindu and non-Hindu students to explore their spirituality.

Shah said the modern climate surrounding religion can be confusing, creating a need for a more contemporary approach.

“Right now there is confusion because of all the different English terminologies. We’re at this kind of tear between what it means to be religious, what it means to be spiritual, what it means to be cultural — it can be detrimental to Hinduism to try and separate these different categories,” Shah said. “There’s also fundamental distrust, I think across many faiths, of institutionalized religion. I want to help articulate now a different type of vision for approaching religion which gets back to what is important — true self-development and the pursuit of happiness.”