The Daily Northwestern • May 1, 2021 • https://dailynorthwestern.com/2021/05/01/sports/football/football-defensive-end-earnest-brown-iv-drafted-174th-overall-by-los-angeles-rams/ 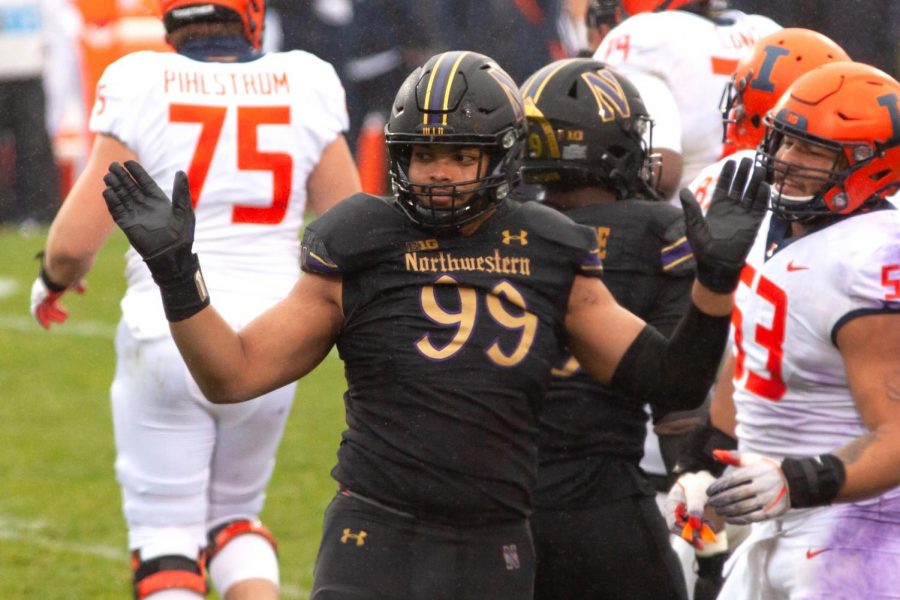 Earnest Brown IV celebrates a play. The defensive end was selected in the fifth round of the 2021 NFL Draft by the Los Angeles Rams.

After two Northwestern players were selected in the first round of the 2021 NFL Draft — offensive lineman Rashawn Slater was chosen 13th overall by the Los Angeles Chargers and cornerback Greg Newsome II was drafted 26th overall by the Cleveland Browns — it would be nearly 150 picks until the next player from the Wildcats was chosen.

Defensive end Earnest Brown IV is heading to the Los Angeles Rams after being selected in the fifth round of the 2021 NFL Draft with the 174th overall pick. Brown IV will join one of the best front seven units in the league with players such as three-time NFL Defensive Player of the Year Aaron Donald and outside linebacker Leonard Floyd.

Brown IV joined NU as a four-star recruit from Aubrey, Texas. His best season came in 2020, when he racked up 32 tackles, eight tackles-for-loss, one sack and a fumble recovery. He earned a consensus All-Big Ten honorable mention for his performance.

Slater, Brown IV and Newsome’s selections marked the 12th time since the merger between the American Football League and the NFL in 1970 that three or more Cats players were drafted.

The Rams also selected former Cats receiver Bennett Skowronek, who spent the 2020 season with Notre Dame. From 2016-2019, he caught 110 passes for 1,417 yards and eight touchdowns.

— The Gameday team looks back on historic Northwestern season