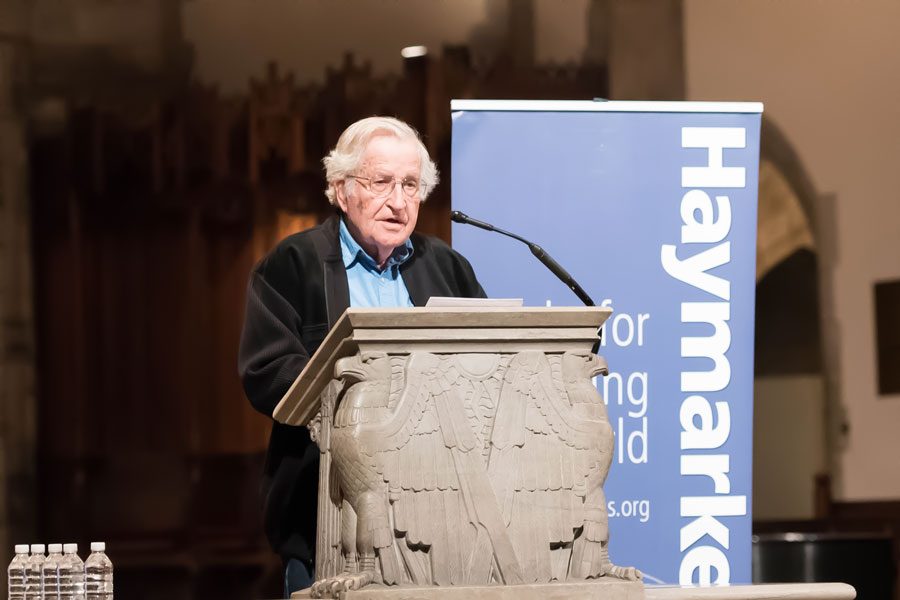 Noam Chomsky, a founder of modern linguistics, spoke about the pandemic, labor rights and pressing political issues in a Thursday webinar co-hosted by Northwestern Political Union.

The event, arranged with political unions at Fordham University, the University of Chicago and Columbia University, drew about 600 attendees. Chomsky, one of the most cited scholars in modern history, identified a number of threats to society that he deemed existential: climate change, the increasing threat of nuclear war, pandemics and neoliberalism.

“There are urgent problems that cannot be overlooked,” Chomsky said. “Like it or not, your generation has to decide whether or not organized human society is going to persist.”

In the hour-long Q&A, Chomsky fielded questions from students on topics from vaccine distribution to the importance of reviving dead languages. He critiqued wealthy countries hoarding COVID-19 vaccines, U.S.-centric foreign policy in Afghanistan, the erasure of Indigenous languages and culture, attacks on labor unions and environmental destruction.

Will Secker, Political Union’s senior events director, said he was excited to get a “big name” like Chomsky after members of Columbia’s club reached out with the idea of an intercollegiate event.

Responding to Political Union’s co-president Felix Beilin’s question about the degree to which universities should regulate free speech, Chomsky said he opposes such restrictions both on principle and as a tactical error.

Rather than prevent Ku Klux Klan leader David Duke from speaking on a college campus, Chomsky suggested students set up a counter event to promote education and discussion.

“You only support them by regulating and suppressing them,” Chomsky said. “It makes it look like there’s something serious there.”

Weinberg sophomore Zack Lori, Political Union’s opinion editor, said he was interested to see Chomsky defend free speech since the scholar is known for his far-left views. Chomsky identifies with anarcho-syndicalism, a school of thought that views revolutionary unionism as a method for workers to gain control of the economy.

Part of the reason the 92-year-old academic appeals to college students is because his ideology falls outside of mainstream politics, Beilin said. Students like seeing someone so accomplished who has broken away from the political center, he said.

“It’s a fundamental attack on human rights and dignity to be subordinated to a master, what we call ‘having a job,” Chomsky said.

Lori said Chomsky’s discussion of income inequality in the U.S. especially resonated with him, and the event inspired him to learn more about Chomsky’s work.

“It’s great that a public intellectual of his stature would come speak to us for free,” Lori said. “It really shows how much he values intellectual discussion over money.”