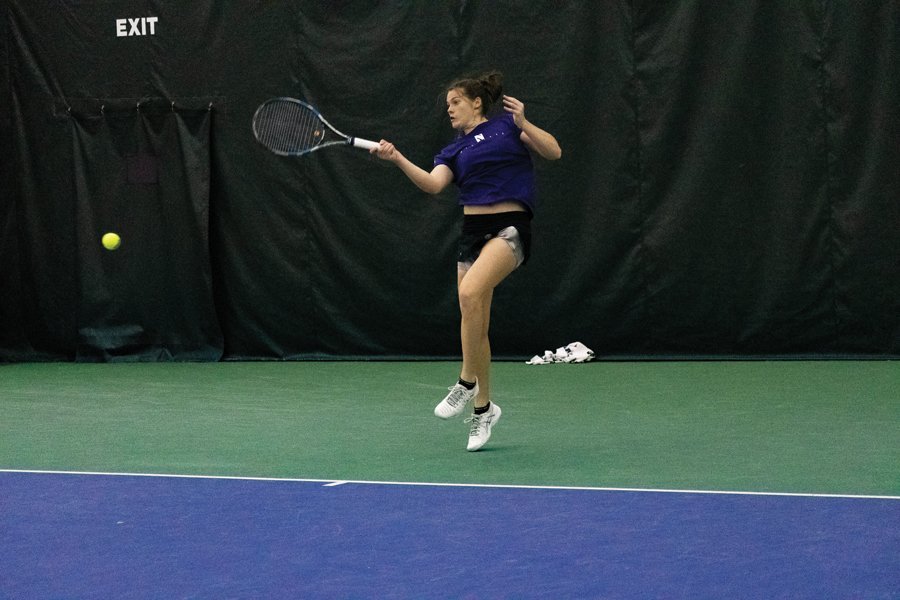 Julie Byrne goes for the ball. Byrne has been part of a dynamic doubles pair with Briana Crowley this season.

The No. 17 Wildcats (17-4, 15-3 Big Ten) earned the third seed in the Big Ten Tournament behind No. 1 Ohio State and No. 2 Michigan. As a result, NU received byes during the first and second rounds of the tournament, moving straight to Friday’s quarterfinals against the No. 11-seeded Golden Gophers (6-12, 4-12 Big Ten). The teams met twice during the regular season, with the Cats winning both contests.

NU entered the season unranked, but the team quickly established itself among the best in the NCAA, rising to No. 13 by the second week of polling. The Cats cracked the top 10 soon after and remained there for multiple weeks, winning 14 straight matches in the process.

However, the team dropped to No. 17 following back-to-back losses to Michigan and Illinois to finish off the regular season.

The Cats are led by a number of strong players this season, including four who have won 12 or more singles matches in 2021: sophomore Briana Crowley, junior Clarissa Hand, sophomore Christina Hand and senior Caroline Pozo.

The team also features a dynamic doubles pairing in Crowley and graduate student Julie Byrne, who went 6-1 in the first position during the regular season.

NU has historically been successful during the Big Ten Tournament, reaching the semifinals in 2019 and the final in 2018, where the team fell to Michigan in a nail-biter loss. The Cats dominated the tournament from 1999-2014, winning 16 straight titles. They appeared in the final game of the tournament since, but never captured the title.

Now, NU looks to regain its regular season momentum and build on past postseason successes against Minnesota. A win would send the Cats to the Big Ten Tournament semifinals on Saturday, where they would face the victor of Friday’s matchup of Michigan and Illinois.