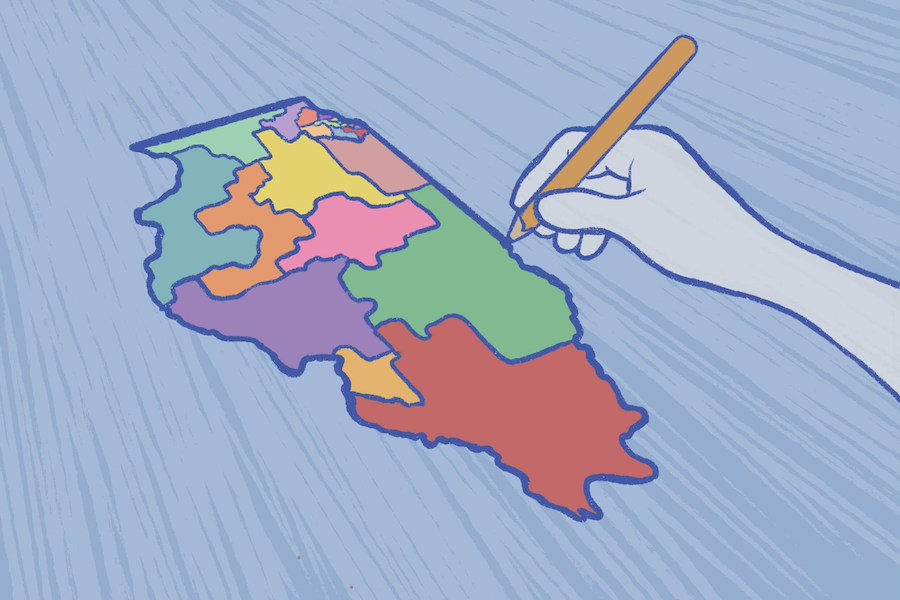 Illinois Democrats are pushing ahead with a plan to redraw the state’s legislative districts without the 2020 census data before a constitutionally mandated June 30 deadline.

A delay in the availability of crucial 2020 census data is dividing state legislators and residents as they look to remap Illinois’ congressional districts in a legislative year that’s been anything but ordinary.

Typically, the Illinois General Assembly convenes every 10 years to draw new legislative maps for state and federal legislative districts after the release of U.S census data. However, the release of the 2020 census numbers that’s needed for states to draw maps was delayed until Aug. 16.

The stakes are high. Earlier this week, the U.S. Census Bureau released initial 2020 census state population numbers, announcing Illinois will lose one seat in the House of Representatives. Since the census determines federal funding disbursement, among other issues, these results are a significant loss for the state.

As the state looks to navigate these changes, the delay has created additional hurdles surrounding an already partisan issue as lawmakers debate possible next steps in remapping Illinois.

The General Assembly is constitutionally mandated to present new maps to the governor by June 30. If this doesn’t occur, an independent commission is put together to draw the maps by Aug. 10. But the delay in data release has complicated this timeline.

Currently, Democratic lawmakers, who hold supermajorities in both the House and the Senate, have opted to use alternative sources of data instead of the 2020 census to draw maps before the June 30 deadline.

However, some groups across the state are opposed to lawmakers’ actions. Tyler St. Clair, the outreach manager with Common Cause Illinois, a nonpartisan political group that focuses on gerrymandering, said his organization is strongly opposed to using any data that isn’t the census.

“We have recently been testifying at the Senate and House redistricting committee hearings and advocating for a process that produces maps using accurate data,” St. Clair said. “We are worried about those who are drawing our maps using outdated data or incomplete data that doesn’t give as accurate a picture as possible.”

St. Clair said Common Cause would rather have an independent commission be created to draw the maps. However, because the new maps are due in two months, he said that plan isn’t feasible. Instead, he said Common Cause has pushed for as much public input as possible.

Since the Illinois legislative session began back in January, the House and Senate have held separate redistricting committee hearings to get community feedback on the map drawing process. Illinois Senate Democrats established 15 subcommittees to gather information from stakeholders in all of the state’s 102 counties.

“The public drawing portal opens the redistricting process to everyone in Illinois,” Hernandez said in the release.“By drawing their own maps and sharing them, people of all backgrounds can engage with the process like never before, and offer legislators a level of insight that will help make this the most open and participatory redistricting process in our state’s history.”

Hernandez’s counterpart in the Senate, state Sen. Omar Aquino (D-Chicago), said in the same release that Democrats are committed to ensuring minority communities in Illinois receive fair and equal representation.

However, Ryan Tolley, the policy director at Change Illinois, said the data Democrats might use — the American Community Survey collected annually by the U.S. Census Bureau — will likely not be sufficient.

“The ACS data is a very small sample of people that the (census) surveys each year there, and not a lot of folks respond meaning it really can’t show you an accurate picture,” Tolley said.

Some have argued that the integrity of 2020 census data has been compromised by fears of low turnout caused by COVID-19. But Tolley said the delay in the data release means the bureau is ensuring the process is done right. He also believes census data is still the best possible data Illinois lawmakers can use to draw the maps.

Tolley argued the best path forward is for lawmakers to delay the map drawing process by requesting an extension from the state courts to ensure the 2020 data can be used when it becomes available.

But, given the slim chance that happens, Tolley said people need to let their voices be heard.

“This is gonna be folks’ representation for the next 10 years,” Tolley said. ”If they don’t speak at the committee hearings, their districts may wind up not serving their interest or not being truly representative of their communities.”

— Illinois to lose one House seat as population drops