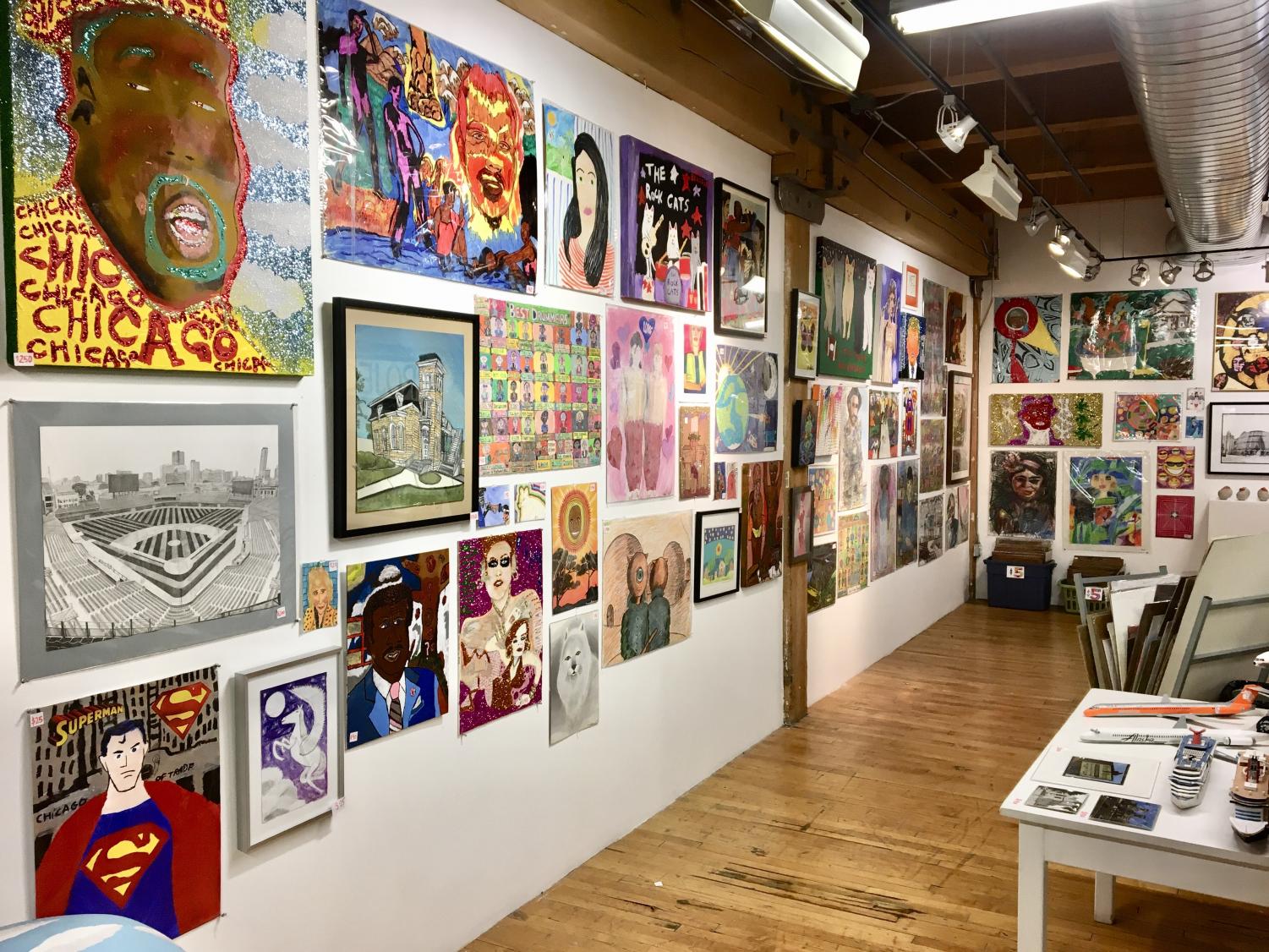 Project Onward’s gallery. The organization hosts many in-person and online exhibitions to promote the works of their artists. (Photo courtesy of Robyn Jablonski )

Project Onward’s gallery. The organization hosts many in-person and online exhibitions to promote the works of their artists.

During the early months of the pandemic, Cherylle Booker was in a difficult situation.

She was living with a family member she has a contentious relationship with, and being stuck in that environment was taking a toll on her mental health. Her primary outlet for therapy and self-expression is art, a lifelong interest that began from watching Bob Ross as a child. She specializes in creating beautiful, detailed ceramic masks inspired by anything from mythology to her internal feelings. Lockdown made it difficult for her to create; she couldn’t attend her art therapy group, she found it stressful working at home, and her worsening depression made producing work increasingly hard.

Luckily, after a few months, Booker was able to find her own housing. She saved up money to move out by selling artwork through Project Onward, the studio she’s worked with since 2019. Booker said she found the studio staff’s support for her as she was trying to improve her situation invaluable.

“When you’re in a tough situation, just that little bit of help and support, and people being there for you and understanding, It means a lot,” Booker said.

Project Onward is a Chicago studio that provides resources for local neurodivergent artists and helps exhibit and sell their work. Currently, the program supports 49 local artists. Some of those artists, like Booker, have depression, anxiety or bipolar disorder, while others are on the autistic spectrum; all share a passion and talent for the visual arts. Creative Director Robyn Jablonski said the program aims to counteract popular stereotypes about neurodiverse artists, which tend to infantilize them and dismiss their work.

“It used to be, ‘Oh that’s cute,’ ‘Oh look what they can do,’” Jablonski said, referring to how audiences often receive neurodiverse artists’ work. “The work speaks for itself, and the work next to any other Chicago artist, it stands parallel.”

Onward has its roots in a publicly funded Chicago organization, Gallery 37, according to Executive Director Nancy Gomez. The gallery offers programs operated by Chicago’s Department of Cultural Affairs, including art classes to gifted juniors and seniors in Chicago Public Schools. Onward was founded in 2004, aiming to continue support and education for neurodiverse Gallery 37 students after graduating high school.

The program moved to virtual operations last year following Chicago lockdown orders, but the studio and gallery is scheduled to reopen on May 12.

“As an organization, I’m hoping to become much bigger than we are right now, and I know we’re going to succeed,” Gomez said. “If COVID didn’t take us down, nothing’s gonna take us down.”

The staff employs part-time volunteers, many of whom have backgrounds in art therapy or social work, to assist artists while working in their studio. Jablonski and Studio Manager Whitney Oliver both started working as interns and volunteers at Onward before they took on full-time. Onward itself doesn’t provide social work for its participants, but the staff does help connect artists to resources when they struggle with mental health or financial issues, Gomez said.

Onward isn’t intended to teach art to participants as the program mostly accepts people with an existing portfolio of work, and seeks artists who have a unique viewpoint and style they’re passionate about. The staff does provide guidance and constructive criticism to artists, but Jablonski said this is focused more on helping them to execute their vision to the fullest extent rather than change their subject matter or structure.

“They support me in a way that they validate what my ideas and concepts are,” said John Behnke, an artist who has worked with Onward since 2011. “They never question anything that I was thinking about doing, and they give me an outlet for creative criticism, which I never got.”

During lockdown, Onward pivoted their strategy to remote operations. Jablonski and Oliver began hosting a weekly Zoom meeting with all of the artists to discuss their projects. Volunteers have also helped deliver supplies and pick up artwork from the artists.

The pandemic has altered the way many artists have produced artwork. Before lockdown, Behnke would spend three to four months creating an individual painting — his work is brightly colored fluorescent portrayals of landscapes mixed with animals and fantasy creatures. He found that his emotions were constantly changing and every week felt like he had an entirely new perspective, making long-term projects impossible. As a result, he has been working on drawings and smaller projects that he can finish within a week.

Behnke has anxiety, and since the pandemic began he has drawn constantly in order to alleviate it. He said Onward has been very supportive of him, calling to check in and giving him prompts and exhibitions to submit to so he is constantly inspired to work. Although he is in a better place than he was in the beginning of the pandemic, it has been difficult for him and many artists like him.

As the studio has been closed, Oliver has focused on expanding the website’s online store, and Onward started hosting monthly virtual exhibitions, including an ongoing exhibition for autism acceptance month called “The Feels” that began on April 16. Oliver said the online store has become an entirely new source of revenue for Onward, one that has allowed them to reach a much wider audience.

According to Gomez, the store has been a huge boon for Onward, and has helped the organization weather the financial issues that have plagued businesses over the past year.  Onward gives 50 percent of their sales back to the original artists, and the program was able to financially assist artists who were unemployed during the pandemic.

Luke Shemroske, an artist who has been with Onward for two years, said he had limited opportunities to display his art or submit it to shows before he joined the program. Onward helped him find a wider audience for his work by featuring him in exhibitions, and he has enjoyed sales of his pieces through the online store. Last year, Onward featured Shemroske’s art in the international Outsider Art Fairs in New York and Paris.

“They’ve been really helpful that way, there’s a lot of stuff I wouldn’t have sold if they didn’t come through and upsell them,” Shemroske said. “They’ve opened me up a lot of a lot of doors and kind of given me a lot of opportunities that I wouldn’t have had otherwise.”

In addition to the professional opportunities, Onward acts as a support system and social network for many of the artists. Artists tend to stay with the program for a long time and develop long-lasting friendships with each other.

“We laugh all day in the studio, there’s always something funny going on,” Oliver said. “We are truly a community.”

Long-time member David Holt joined Onward in 2006 after taking classes at Gallery 37. Holt specializes in making “obituary portraits,” drawings of notable people who have passed on. Some recent subjects include Chadwick Boseman, Ruth Bader Ginsburg, and when he spoke with The Daily, he was working on a portrait of Prince Phillip. Holt began making these portraits in response to his personal loss of his father, mother and grandmother, as a way to show his “love and respect to all people.”

Holt said he’s very close with the staff and other artists at Onward, who he describes as a “alpha mega team” that has taught him how to work professionally as an artist. Onward has provided him personal support during difficult times; when his mother died in 2013, several artists and staff members attended her funeral.

“They have been an awesome blessing in my life,” Holt said. “If I ever need them, they are there for me.”

In the future, Gomez said she is aiming to expand Onward substantially, including moving to a larger space, hiring a full-time social worker or therapist, and getting artists featured in more outside museums and exhibitions such as EXPO Chicago. At this stage, however, she is focused on supporting her current staff and artists through the end of the pandemic.

Booker said working at Onward has helped her develop her voice as an artist, and has allowed her to advocate for other neurodiverse people or people dealing with mental illness. As she describes it, the image of mental illness for too many people is a “person in a straightjacket, in a padded room.” Her art allows her to visualize her experiences in a way neurotypical people can understand, and helps her and other people with similar struggles feel validated.

“It’s given me a chance to kind of get on my soapbox and say, ‘Hey, you know, people with mental illnesses are human beings,’” Booker said. “Like we experience the same emotions as you do. They just present themselves in a different way.”