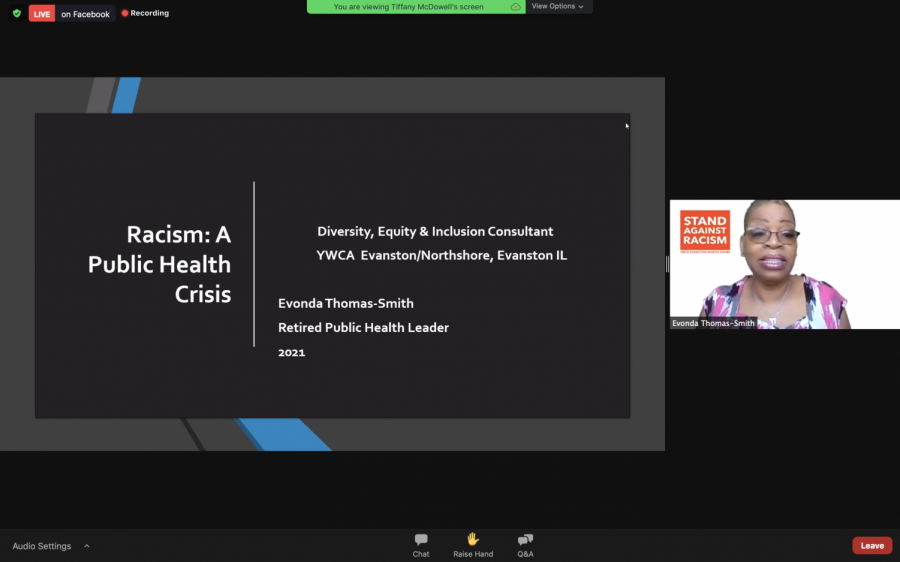 In order to address health inequities, communities must address structural and social racism and determinants of health, Evanston’s former director of Health and Human Services Evonda Thomas-Smith said in a webinar Thursday.

The event, Racism: A Public Health Crisis, was hosted by the YWCA Evanston/North Shore Equity Institute as part of its 21 Day Racial Equity and Social Justice Challenge, which is running until May 12.

During her tenure in Evanston, Thomas-Smith established the Erie Evanston/Skokie Health Center, the first federally qualified health center in Evanston.

Thomas-Smith said social determinants of health make up 50 percent of health outcomes. These include the conditions in which people are born, grow, live and work, which are shaped by “the distribution of money, power and resources,” she said.

“We need to address the conditions and barriers where people live, age and grow, to really move the needle on healthier outcomes,” Thomas-Smith said. “This is the sum of a person’s health. It really is connected not to your genetic code, but it’s more connected to your zip code.”

Thomas-Smith said health institutions around the country have to move beyond the medical model and clinical practices to solve health inequities. Instead, she said they must shift their lens from medical to societal intervention, the latter of which requires people to address systemic inequities and racism.

Long term conditions and “accumulative discriminatory practices” can create toxic stress and a psychosocial stressor, which affect an individual’s physical and mental health, she said, including by increasing the risk of hypertension and uncontrolled diabetes. Further, Thomas-Smith wrote in her presentation that racism can “create conditions that increase exposure to traditional stressors,” including unemployment.

This includes segregation and redlining, which have led to historic disinvestment in marginalized communities, restricted socioeconomic attainment and concentrated poverty and food insecurity.

“There are communities that have 15 years less of their life expectancy robbed — stolen from them — because of the conditions that they experience because of where they live, grow, age,” Thomas-Smith said. “When your mortality is based on your zip code and not your genetic code, (it) is an unacceptable issue that we… must grapple with.”

The pandemic has disproportionately impacted communities of color, and Tiffany McDowell, the director of the equity institute at YWCA and the moderator of the webinar, said the effects of COVID-19 show health disparities.

While people of color reported more interest in getting the vaccine than White people, McDowell said wariness of the healthcare system still exists.

“We still saw this narrative around, Black people are fearful of vaccines because of the Tuskegee Experiment, which is true, but more likely than not, people mistrust the current system,” McDowell told The Daily. “It’s not just the historical mistrust, it’s that the healthcare system and public health systems have really done pretty little to build that trust or to regain that trust (of) black and brown people to this day.”

Videos of Black death can also impact the health of Black people, Thomas-Smith said. McDowell said the policing system adds to the number of preventable deaths.

McDowell told The Daily those involved in government and organizations in Evanston need to listen to communities. She said it’s important they pursue initiatives and policies that can improve racial inequities and health disparities in the long run, including housing affordability and access to healthcare.

“When we think about the way that racism plays out in these systems… we need to look at the data and we need to create solutions because these are taxpayer funded entities, and there needs to be some accountability,” McDowell said.

In addressing health inequities, Thomas-Smith said government officials and organizations must learn the language of their communities and allow those from impacted and marginalized communities to lead initiatives and decide what is most needed.

Thomas-Smith also said she heals from collective trauma by practicing radical self care for herself, which includes meditation, racial healing circles and daily mindfulness.

At the beginning of the webinar,  Eileen Hogan Heineman, the manager of community outreach at YWCA’s Equity Institute presented a land acknowledgement and said it’s important to be looking at racism as a public health issue.

“I want to encourage us all to be in this moment… in all of its fullness, in its pain, in its seeds of hope, in its frustrations, in its opportunities to be a new place, to be a new people, to be a new nation,” Heineman said.