Bienen hosts first in-person, walk-through performance on the Lakefill in over a year 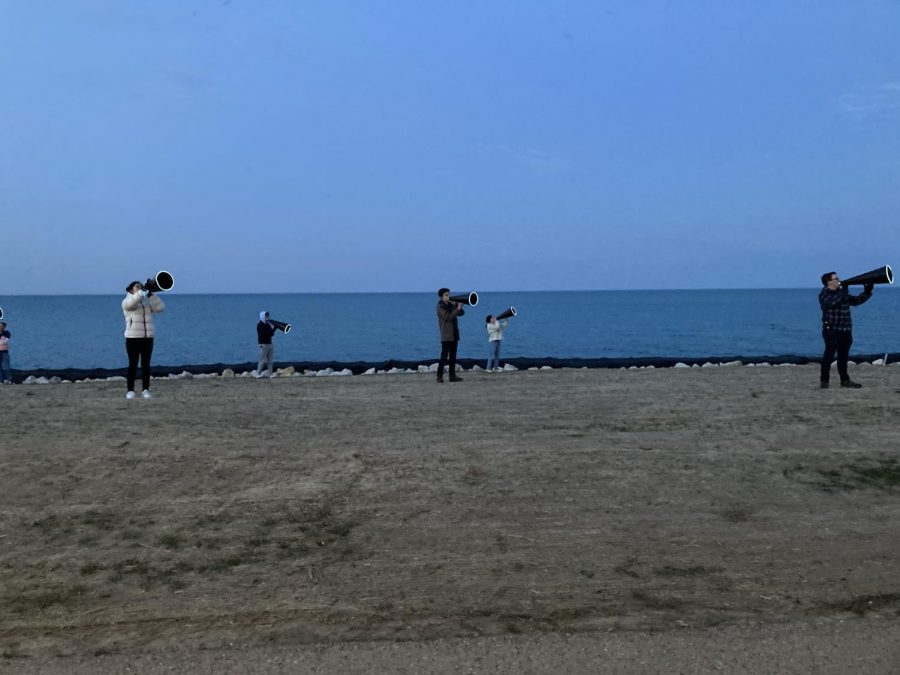 Singers use megaphones to amplify the sound during “Eclipse.” It was Bienen’s first in-person performance since March 2019.

When Bienen Prof. Donald Nally and Kevin Vondrak (Bienen ’17) set out to compose a piece for Northwestern students during the COVID-19 pandemic, they knew Lake Michigan would be a crucial element.

“Every time you walk up, right there, you have that view of the city down the shoreline. And it’s a different view every single day,” Vondrak said. “That’s an omnipresent part of the experience here at Northwestern… it’s this catalyst for introspection, and that’s somewhat what the piece is about.”

“Eclipse,” Bienen’s first live, ticketed performance in nearly 14 months, premiered Sunday and Monday. The performance was a socially-distanced, walk-through concert on the Lakefill under the full moon. Nally and Vondrak composed the music using text from a poem by Northwestern alumna and Illinois Poet Laureate Angela Jackson (Weinberg ‘77).

About 70 performers from the Bienen Contemporary/Early Vocal Ensemble, University Chorale and University Singers performed the piece, spaced at least 20 feet apart on the Lakefill. They used large megaphones circled with lights to project the sound and add to the visuals, so people could hear it across the quarter-mile expanse.

Some singers had to Zoom into the performance. Students who were away from campus or did not want to sing live performed on iPads that rested on music stands interspersed throughout the Lakefill.

Vondrak said the mix of in-person and virtual performers encapsulated the current moment and the creation of art in a pandemic.

“Every once in a while, you’ll catch a digital sound,” he said. “It’s a really touching artifact of the time.”

Priya Krishnaswamy, a Bienen freshman and live performer, said she appreciated how the performance brought the community together — a sharp contrast to the isolation of the pandemic.

“The whole premise of this is to evoke hope in people,” Krishnaswamy said. “It was really inspiring to see people come together and make the most out of the situation.”

Krishnaswamy said the performance was difficult to coordinate over Zoom rehearsals, even though there wasn’t much music to memorize.

In addition to in-person rehearsals, the group rehearsed over video calls. Each rehearsal, Krishnaswamy said, provided clarity around the logistics of the performance.

“Singing over Zoom individually versus singing together is a different feel,” she said. “People prefer singing together, they miss that, so it was exciting but also challenging to coordinate everything.”

Another performer, Stephanie Chee, echoed Krishnaswamy’s sentiments around the challenges of putting on a socially-distanced walk-through performance. The preparation ahead of the performance was different from any of her other choral performances because of the different types of rehearsals and the social distancing during the actual event, she said.

Chee said it was strange for her to be singing at a distance from her peers with megaphones on the Lakefill. Unlike usual performances in which it’s easy for her to hear the people next to her, Chee said she could only hear her section during the entirety of the performance.

Regardless, Chee said she enjoyed singing in-person again with other people, something she has not been able to do in over a year.

“It was very much an immersive, emotional-based experience,” Chee said. “It feels really good to collaborate and make music again in-person… it felt different, but powerful.”