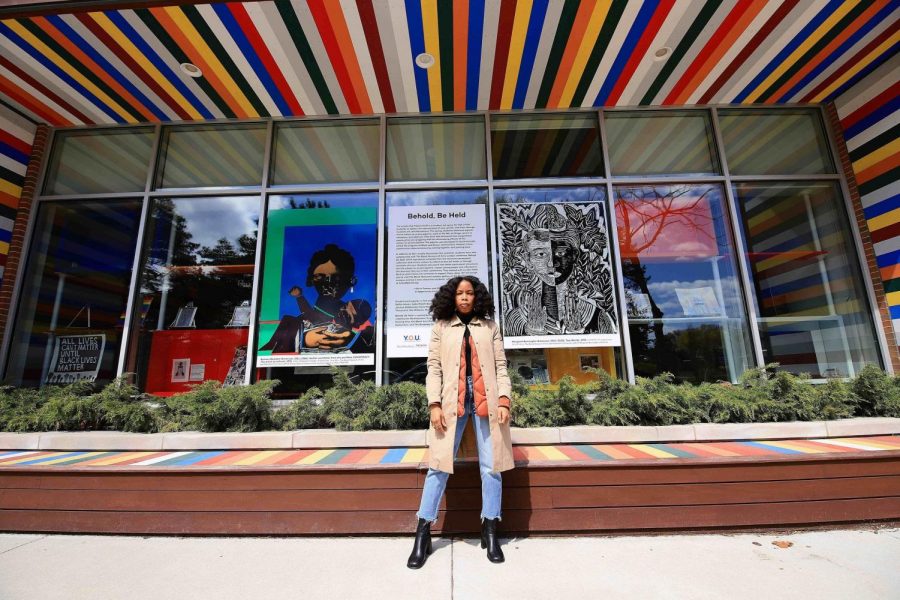 Curator Rikki Byrd stands outside the Youth & Opportunity United (YOU) building at 1911 Church Street. Students part of the YOU Leadership Project selected two works for the exhibition “Behold, Be Held.”

A new outdoor exhibition explores themes of self-care, self-authorship and community with reproductions of works from The Block Museum’s collection.

The “Behold, Be Held” exhibition will be exhibited at three locations around Evanston through August 22: facades of The Block, the Ethel M. Barber Theater and the Youth and Opportunity United building on Church Street.

Curator Rikki Byrd is a third-year Ph.D. candidate in the department of African American studies at Northwestern. Her research interests include Black studies, performance studies, fashion history and theory, as well as the art history of visual culture. Byrd developed “Behold, Be Held” during her time as the 2020-2021 Block Museum of Art Interdisciplinary Graduate Fellow.

She said the exhibition invites viewers to reflect, meditate and ask themselves what they need right now. Drawing inspiration from the song “Plastic” by Moses Sumney, Byrd explored the idea of wanting something but not being able to have it. She said many people have experienced this feeling throughout the pandemic.

“I was really interested in subtle gestures,” Byrd said. “We’ve missed moments like hugging people, or we’ve missed gathering in groups with people, but what are the subtleties of that? That’s what I really wanted to explore.”

One work, entitled “Gossip” by Elizabeth Catlett, exemplifies this focus on small gestures by depicting two figures sitting close together. Byrd said something as subtle as whispering to others in public, for example, is now impossible because of the pandemic.

In light of all the loss from the pandemic, Byrd said self-care has been encouraged more than ever. But taking care of oneself can be difficult in isolation, she said. Even in works with just one subject, Byrd became interested in thinking of the ways those figures make space for themselves.

“The works… were helping me reflect and meditate at home on the subtle things that sometimes we can’t even put a word to or we don’t even know how to articulate, but we’ve missed a lot in the past year,” Byrd said.

The exhibition is partnered with Evanston organization Youth & Opportunity United, whose mission is connecting with the community and uplifting the voices of young people. The organization works specifically to close the opportunity gap among young people through services like afterschool programs, clinical counseling and family engagement.

The Block has joined them in online programming throughout the pandemic, and during this curatorial project, has engaged in conversation on the group’s theme this semester: the school to prison pipeline.

Olivia Tsotsos, YOU’’s leadership program leader, said art museums have historically been inaccessible for a lot of people. They said the partnership with Block connects the community to Northwestern’s private collection.

Students learned through the partnership they have the power to make their voices heard as artists, as youth and as leaders, Tostsos said.

“In the fall we were discussing fatphobia and colorism and hairism and European beauty standards, so (The Block) introduced to us a really great artist, Deborah Roberts, who focuses on all that in her art,” Tsotsos said. “It’s great to have that connection for our students to learn more about artists.”

Students selected two works for the exhibition, “Mother and Child” by Romare Bearden and “Two Worlds” by Margaret Burroughs. Both are available to view on the windows of the YOU building in Evanston.

Erin Northington is the Susan and Stephen Wilson associate director of campus and community education and engagement at The Block, said during the museum’s first curatorial project with a community partner, students looked at Byrd’s vision of gestures of care alongside their program’s theme of the school to prison pipeline.

“What they did so beautifully was to look at works from the collection that spoke to both of these ideas of care and where we look for support,” Northington said. “But then put that in dialogue with the school to prison pipeline and perhaps what it feels like when those resources aren’t there for you.”