Softball: Northwestern prepares for crucial conference matchup against No. 20 Michigan 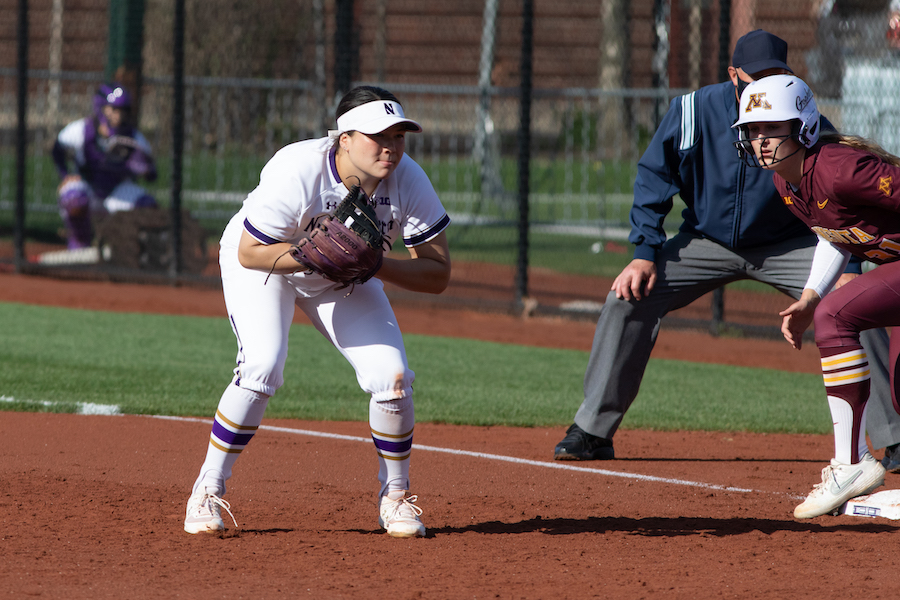 First baseman Nikki Cuchran prepares to field the ball. The junior has made only two errors on the season.

Northwestern won nine out of 10 contests before it was swept by Minnesota. The Wildcats bounced back by winning three out of four games against Iowa last weekend.

The series holds significant conference implications as the purple and white, the third seed in the Big Ten, look to rise in the standings and the Wolverines hope to maintain their hold on the top spot. With the postseason less than a month away, every win counts for an NU squad that is attempting to win its first Big Ten Tournament regular season title since 2008.

“Our goal is just to hit the ball hard, put it in play and force them to make plays,” coach Kate Drohan said. “If we do give anything up, we need to throw a punch right away.”

A defining factor of this weekend’s series is the Wolverines’ pitching staff. The rotation leads the conference in earned runs allowed and hits and pitchers Alex Storako  and Meghan Beaubien rank first and second in the Big Ten in ERA with 0.41 and 1.11, respectively.

“Pitching is definitely their strength, and we have got to go in with a good plan,” Drohan said. “The series will come down to timely hitting.”

To combat Michigan’s pitchers, NU needs to bring its offense. Luckily, it is one of the best in the Big Ten.

The Cats hold the second best batting average in the conference and lead the Big Ten in RBIs, hits and runs. This effort is led by the bats of Rachel Lewis, Skyler Shellmeyer and Jordyn Rudd, who all maintain a batting average that ranks in the top five of the Big Ten.

This offensive prowess was on display in three wins against the Hawkeyes last weekend, as the Cats averaged just under eight runs per victory through their three wins, with two home runs in both Friday’s game and the first game Saturday. Lewis held the hottest hand at the plate, leading the team with seven hits in the series.

“With them, it is all about finding the right pitch that they can drive,” Drohan said. “Their pitch selection and their decision making has grown over the last few weeks.”

On the defensive end, the Cats have some strong arms. Junior pitcher Danielle Williams — who threw a perfect game against the Iowa Hawkeyes —  and graduate utility player Morgan Newport rank fifth and sixth in ERA in the Big Ten with 1.40 and 1.58 stat lines. Williams also has 12 wins of the season, the second-most in the conference behind Storako’s 13.

NU has one of the best defenses in the Big Ten, as the team boasts a 98.3 fielding percentage.

“A lot of it has to do with our communication with each other,” left fielder Angela Zedak said.

This weekend’s series is a marquee matchup for the conference, as both squads were ranked in the Top 25 of the USA Today/NFCAD1 Coaches Poll for two weeks earlier this season.

As the Cats prepare to face the maize-and-blue, Zedak knows the type of opponent she and her team are facing. As a result, she knows the purple-and-white need to be locked in all weekend.

— Softball: Cats try to bounce back against Iowa after getting swept last weekend