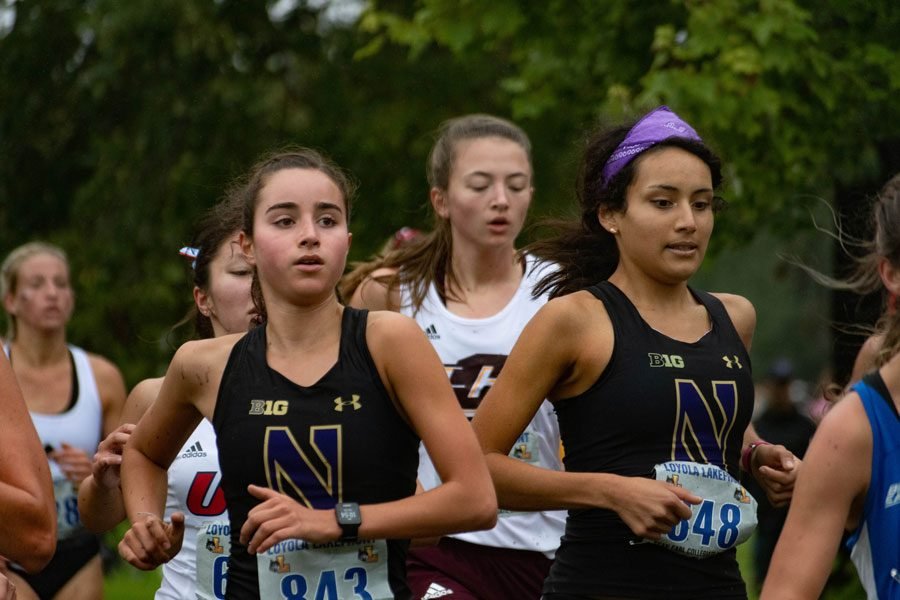 In a season that’s anything but normal, some trends are staying the same for Northwestern cross country: putting up season-bests and rewriting the record books.

The Wildcats continued this trend at the Big Ten Invite II hosted by Indiana. In Bloomington, NU persevered through multiple lightning delays to come up big in several races.

The Cats controlled the 1,500-meters, as freshman Emily Casaclang won her section with a time of 4:35:42 and graduate student Clare Severe finished seventh overall in 4:25:70 — a time placing her second in the Cats’ record books. Sophomore Kalea Bartolotto also added her name to NU’s records by finishing the 10,000 meters race in 34:58, the third-best time in program history for the event.

Coach Jill Miller said the Cats arrived at the meet “much more physically and mentally prepared” than at previous meets this season. She called the team’s times “really exciting,” adding that she was impressed with her team’s performance and how they competed.

“I was pleased with seeing the correlation from practice to outcomes,” Miller said. “That was a really thrilling thing for our coaching staff and for our student-athletes, to see such improvements and jumping into the school record books.”

Bartolotto, who raced the distance for the first time in her career, said her primary goal heading into the meet was breaking 35 minutes. When she achieved the task, she said it was “exciting and motivating” and shared that entering the Cats’ record books was “the cherry on top.”

The lightning delays were lengthy, pushing Bartolotto’s race to 11:20 p.m. She said embracing a “go with the flow” mentality and understanding that everyone else was in the same situation helped her ahead of competing.

Severe agreed with the sentiment, saying the “uncontrollable” nature of weather and understanding everyone else had to go through delays kept her from stressing.

Before the Big Ten Invite II, the Cats had nearly two weeks off. Now that the event has concluded, the team will look to build on its success at the Big Ten Relays this Friday and Saturday.

Miller said most Big Ten teams typically attend at least one large relay meet during outdoor track season, but can’t this year due to their conference-only schedule. She added that the Big Ten Relays were designed to fill in for teams’ inability to attend large-scale relays.

“(Big Ten coaches) thought this would be a great chance for teams to get away from the individual mindset and more into team outcomes,” Miller said.

While some NU runners are competing in individual meets, the Cats are primarily focusing on their 4 x 1600-meters relay and their distance medley relay teams ahead of competition.
Bartolotto said she has taken it easier than the rest of her teammates while preparing for the Relays to ensure she fully recovers from running the 10,000-meters and can run her “best race” over the weekend.

Severe said the Cats have been “dialing in” as the season nears its end, placing a greater focus on speedwork. She said the team’s preparation hasn’t been much different than usual, aside from having to practice baton hand-offs.

“The relays this weekend really should be fun,” Severe said. “It’s a chance to get out there and actually race with your teammates.”