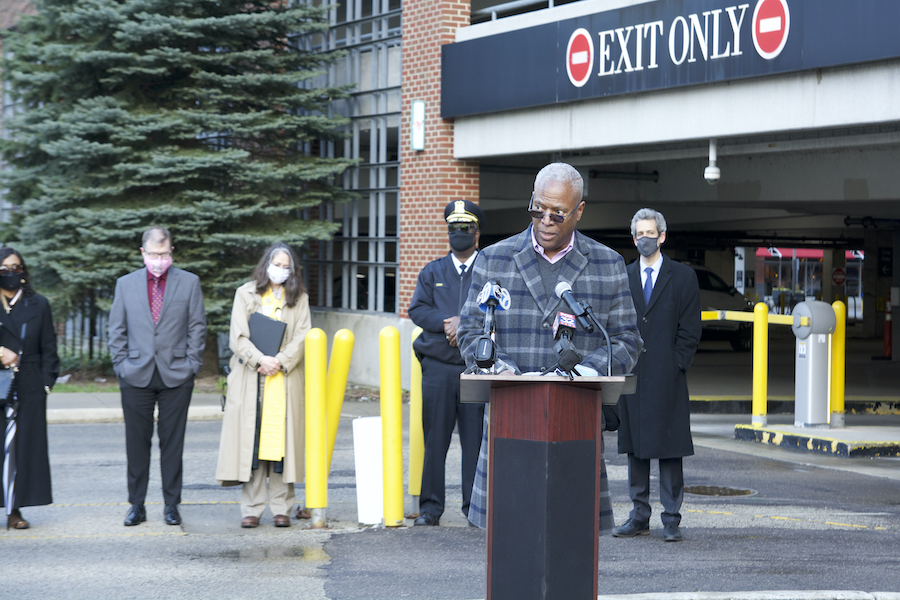 Rev. Michael Nabors of Second Baptist Church, the main organizer of the vigil, speaks about remembering the Black men, women and children who have been killed by police. Nabors emphasized the number of trials in which justice has not been served and urged the community to continue the fight for justice.

Over 60 Evanston residents gathered to honor George Floyd and affirm the work of the Black Lives Matter movement at a vigil Wednesday evening, a day after the conviction of former Minneapolis police officer Derek Chauvin.

The gathering, held at the Downtown Evanston Farmers’ Market, was sponsored by numerous churches and synagogues, alongside the city and Northwestern.

Rev. Michael Nabors of Second Baptist Church, the main organizer of the event, honored the lives of the Black men, women and children who have been killed by police, emphasizing in his speech the number of trials in which justice has not been served.

He then read a statement written by a Northwestern Ph.D. student, who stressed that though the verdict of the Chauvin trial was just, the result isn’t indicative of systemic change.

After recognizing those who fought for justice following the death of George Floyd, Rev. Eileen Wiviott of the Evanston Unitarian Church said there is still a lot more to do.

She emphasized the need to reimagine the meaning of community safety, urging the community to find nonviolent solutions.

“We know that we need to reimagine restorative justice as an alternative to punishment and death,” Wiviott said. “We know that we must commit ourselves today and every day to dismantling white supremacy, systemic racism and criminal injustice in every form, so that we can all be freed.”

Mayor-elect Daniel Biss’ said the community has a “sacred responsibility” to not only come together and mourn, but to continue to push for change. He emphasized that the verdict does not signify the end of the fight for justice.

“It’s really critical that we establish in our shared understanding that what occurred yesterday was not the solution, but a step that calls upon us to enact the solution,” Biss told The Daily.

Evanston Police Chief Demitrous Cook said he wants the Evanston Police Department to take a community-oriented approach and “understand the values in the different communities.”

Moving forward, Nabors said he hopes Evanston leaders will collaborate to dismantle systemic racism. Nabors told The Daily he feels local leaders’ willingness to come together and work through issues is something that makes Evanston unique.

According to Nabors, a committee representing 40 sectors in Evanston — including NU and the Evanston Community Foundation — has been meeting weekly throughout the pandemic to develop strategies to fight COVID-19. He said leaders should take a similar, sustained approach to fighting racism.

“I think that we have struck gold (by forming this committee),” Nabors told The Daily. “Using that as a catalyst for transformation and change to begin to tear down some of these issues that continue to plague Evanston — that’s gonna be beautiful.”

“It is my prayer that the walls containing division, racism, bitterness and hatred will be crumbled by the floodwaters of unity, peace and love for all mankind,” Henderson said. “In addition, let us get practical recognition (of) the injustice of the past by building a future based on equality and social justice.”