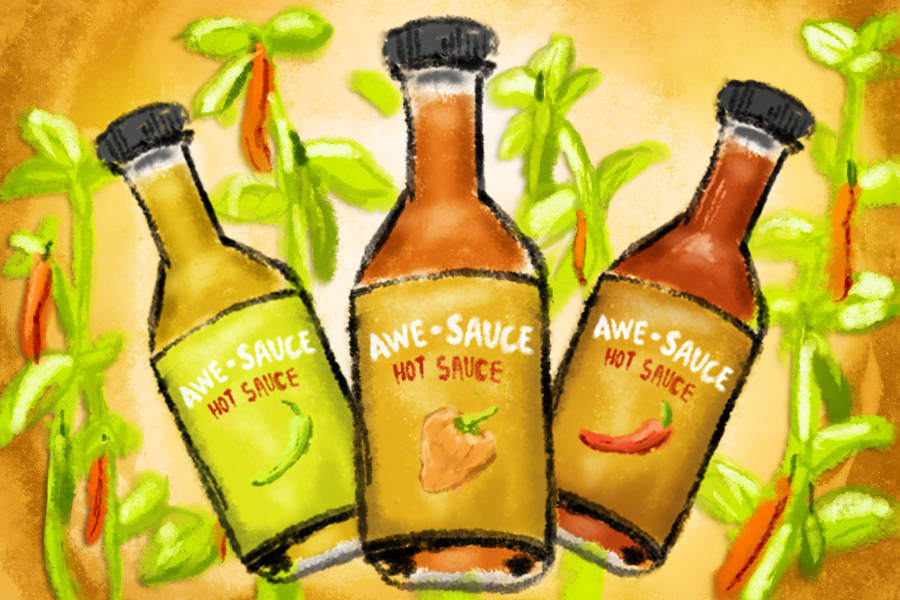 Verzell James has brought 100 boxes of Awe-Sauce, his hand-crafted hot sauce, to various shops and restaurants around the city. His goal? To expand, to succeed and to show others they too can grow a business from the ground up.

“Especially for African Americans, I think there needs to be a model for people to look at and go, ‘I can do that,’” James said.

Currently, Awe-Sauce can be found in multiple locations across Evanston, including Lemoi Ace Hardware, Village Farmstand and Prairie Joe’s Café. James said he also does pop-ups at Temperance Beer Co., and was recently contacted by Whole Foods, who may soon carry Awe-Sauce in its local stores.

James said his sauces have been 20 years in the making. An avid gardener, he would make hot sauces from peppers he grew in his own front yard. Every Memorial Day weekend, he’d host a barbeque where he gave out bottles of his hot sauce.

“People really liked what I was doing,” James said. “Someone will go ‘do you have a sauce that does this or has that?’ And I’ll go, ‘no.’ And then I would create one.”

In 2017, James decided to “run with it” and turn his love for hot sauce into a business — sharing his product across the country.

There are currently nine different flavors of Awe-Sauce, all inspired by ethnic cuisines, including Mexican, Creole and Caribbean cuisines.  Though he’s not a cook by trade, James said he loves experimenting with flavors. Creating hot sauces, he said, is a way for him to express his creativity, and he loves eating at different restaurants across Chicago to find inspiration.

James visited Ralph Dupuis, the owner of Lemoi Ace, as part of his 100 box initiative, where he brings boxes of his hot sauce to 100 local businesses. Dupuis said he wanted to put the hot sauce on his shelves because of its uniqueness.

“They were really good, and they’re not obnoxious,” Dupuis said. “A lot of times you buy a hot sauce and it just burns. These have really good flavor.”

James is currently working on expanding his business model. Last July, he hired his first employee, Grayson Deeney, to work at his production facility in the Family Focus Evanston community kitchen.

Before James hired Deeney as part of the Mayor’s Summer Youth Employment Program, Deeney was already working in the kitchen with Evanston Township High School’s Transition House Program, a program for special education students aged 18 to 22.

Deeney works five days a week, separating, fermenting, cooking, seasoning and blending the peppers together. On Sundays, he goes to the Awe-Sauce pop-up at Temperance Brewery to promote the products.

Martha King, Deeney’s mom, said James is patient, kind and committed, and being able to work with James has been “a gift” because there’s not a lot of job opportunities or programming for adults with disabilities.

“It is just truly the greatest thing that happened in 2020,” King said.

James has big visions for the future. He taught Deeney the production process from top to bottom, and hopes that soon, Deeney will be able to train others as the business grows.

As Awe-Sauce expands, James said he hopes to expand its gardening and production facilities, creating jobs that will strengthen the local community and spur entrepreneurship.

“I know that we can’t rely on the government to create jobs for us. Job creation always comes from private innovation,” James said. “And so with what we’re trying to do with creating a growth production facility is creating jobs.”