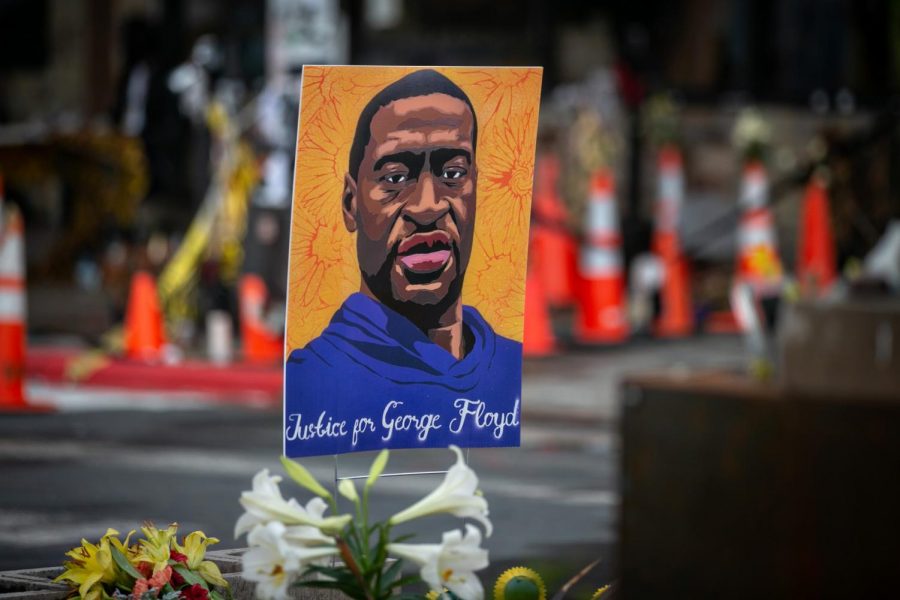 A memorial to George Floyd in Minneapolis. Northwestern and Evanston community members continue to grieve Floyd.

For many, this verdict is not enough.

Before local activist Darlene Cannon heard Chauvin was convicted of second-degree unintentional murder, third-degree murder and second-degree manslaughter, she said she expected him to be found innocent — not because he wasn’t guilty, but because she thought the system would protect him.

“I was happy there was accountability, but saddened that George Floyd lost his life. His daughter has to grow up without a father,” she said. “Black people live in fear. People just want to be free, and we just want to live.”

Weinberg freshman Zai Dawodu also said she didn’t expect Chauvin to be found guilty on all three charges. When she heard the news on social media, Dawodu said she started crying.

“It was a step in the right direction — like a little bit of hope that maybe America can become better,” Dawodu said. “We don’t have to have cops killing people and if cops do kill people and maybe we can get some justice for it.”

Just before the verdict was read, a police officer shot and killed 16-year-old Ma’Khia Bryant in Columbus, Ohio. With every killing, Cannon said Black people have to live and relive trauma.

McCormick freshman Nick Baird said while he likes to think reform is possible, the lack of change in the past year is pushing him to believe abolition is necessary.

Baird said he hopes the verdict impacts police forces to “see their flaws and try to address them.”

An Evanston Fight for Black Lives organizer, who asked to remain anonymous for her safety, said for justice to be realized, police and prisons need to be abolished and replaced with life-giving institutions.

Justice, she said, is when everyone can live and feel safe. Though many people call Chauvin a “bad apple,” the organizer said the entire tree is rotten.

“Abolition is the only way,” the organizer said. “We must recreate something new that is not designed to disenfranchise harm and murder Black people…(Police abolition) is absolutely necessary and we cannot wait decades for it to happen.”

The need for continual action

Last Sunday, EFBL and NU Community Not Cops led a protest to honor the lives of Adam Toledo and Daunte Wright and advocate for the abolition of police.

The EFBL organizer said she has noticed a difference in the number of people involved right after Floyd’s death compared to now. In comparison to a protest last May, which drew a much larger crowd, The Daily reported about 700 people marched last Sunday.

“People will feel like this (verdict) was justice, and therefore there’s no more work to be done, and not recognize that it shouldn’t take another death for people to feel moved enough to start chiming in and doing the work, especially White people,” she said. “This death, every death before this, should be enough anger to hold on to, enough motivation to say this can’t happen again.”

Dawodu said she’s heard people call George Floyd’s death an “awakening” —  but as a Black person, she’s always been aware of police violence. Dawodu was also frustrated by people who had been silent for months, but suddenly posted something about the verdict.

The EFBL organizer also said some of the reactions to Floyd’s death are disrespectful, including when House Speaker Nancy Pelosi thanked Floyd for “sacrificing” his life for justice.

“It takes the burden off of the fact that he was literally murdered by people,” the EFBL organizer said. “That also makes it seem like this was something Black people aspire to do, as if like, ‘I hope one day I get killed by the police so that my name is remembered forever.’ I don’t ever want to be a hashtag.”

“We need to think about why we are calling the police,” she said. “Because when we call the police, we kind of set the tone for the police officer in his mindset, as to how he’s going to be reacting to that person.”

The EFBL organizer said members of the Evanston community need to educate themselves, as well as give their time and physical presence to help. Cannon shared similar sentiments, and said people need to come together, be angry and get involved to continue to push for systemic change.

But while community members look toward the work that still needs to be done, there is above all a feeling of loss.

“Today’s not a day of rejoice,” Cannon said. “I’m sad. I’m very sad because we saw the life leave George Floyd’s body right in front of us, and we saw that man kneel on his neck with no remorse… Change is the thing that I hope and pray for, for this country.”