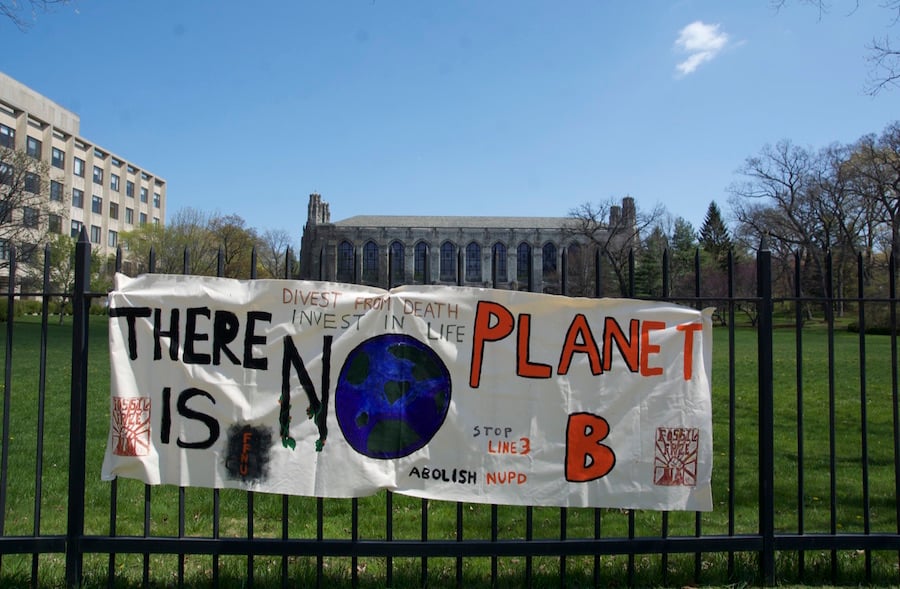 In an Earth Day march, Fossil Free Northwestern called on the University to divest from fossil fuels, reinvest in Black, brown and Indigenous communities and abolish University Police.

About 60 protesters gathered at Oldberg Park on Clark St., where organizers delivered a land acknowledgement and distributed snacks. Participants knelt on the ground and touched the land in appreciation. They then marched onto Chicago Ave. before stopping at the Donald P. Jacobs Center for closing remarks.

The group chanted slogans along the way, including, “Disclose, divest, or this will be our death,” and “What do we want? Climate justice. When do we want it? Now.”

At least eight Evanston Police Department cars were stationed around the intersection of Foster St. and Sheridan Road.

Fossil Free NU member Lucy London said the march’s theme, “Beyond Earth Day,” seeks to highlight how climate justice should extend beyond a single day of the year.

“Our goals as Fossil Free are not just divestment,” they said. “We want to see and uplift the lived experience, support Indigenous sovereignty and do broader environmental justice work because divestment itself is just a false solution.”

The group’s goals are rooted in abolitionist demands, London said, and it plans to continue to push for divestment from UP and fossil fuels in favor of reinvesting in communities. Fossil Free NU’s last in-person event was a joint protest with NU Community Not Cops last October.

Divestment is a step toward decolonizing the Indigenous land Northwestern sits on, said a student speaker at the march, who asked to stay anonymous for safety reasons.

“Divestment is just the first step,” the speaker said. “It’s still working in the capitalist structure. Why does our University have $11 billion (in endowment money) to hoard when it should be investing in Evanston and Northwestern communities?”

London, who also spoke at the march, called on Chief Investment Officer Amy Falls to recognize Fossil Free NU’s demands and commit to working toward climate justice. The group sent Falls an email last week requesting a meeting and have yet to receive a response, London said.

Fossil Free NU also demanded Falls disclose the University’s investment portfolio. In Feb. 2020, the Investment Committee of the Board of Trustees rejected Fossil Free NU’s proposal calling for divestment from any of the top 100 coal, oil and gas companies.

“We’re serious about our demands,” London said. “By doing nothing to stop the money pipeline fueling the genocidal fossil fuel industry, she is already causing immense violence to Black, brown, Indigenous and poor frontline communities.”

Steven Du, a member of the Native American and Indigenous Student Alliance, said the climate justice movement is intertwined with the push for Indigenous sovereignty and abolition and the fight against settler colonialism and White supremacy, he said.

The University unfairly puts the impetus on students to push for these causes and does not meaningfully address student demands, the Weinberg senior added.

“Do something, instead of trying to place all the burden on the students and saying, ‘Oh, we’re listening,’” he said. “It’s very frustrating because it’s students and graduate students and the community that really does the work, and the institution tries to take credit.”