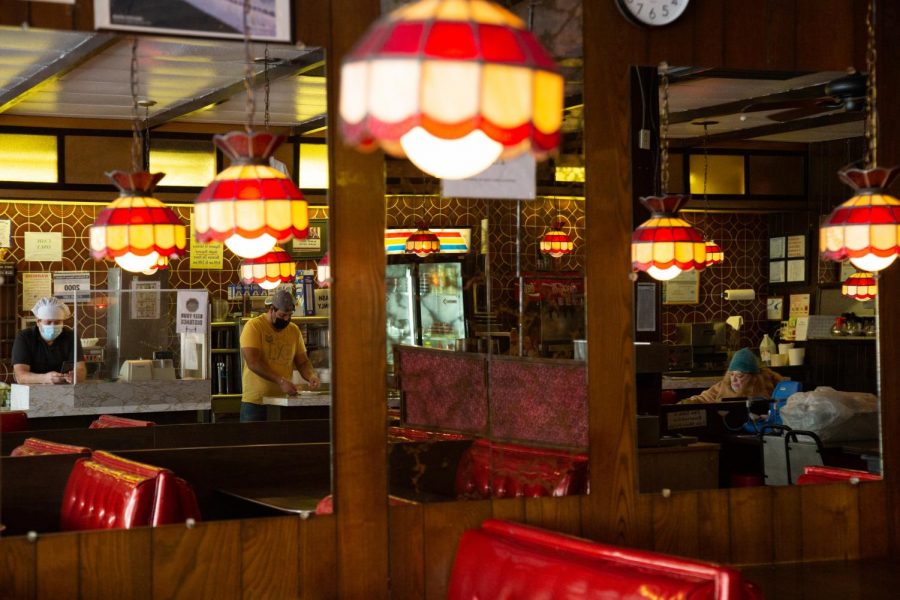 From left: Hugo Espino uses his phone, Oliveros Espino prepares a plate behind the counter and a single customer eats inside the restaurant on January 29, 2021. The song on the radio and the sound of the customer eating are the only sounds in the room.

Multimedia storyteller Woojae Julia Song (Medill ‘19) has always been interested in the food scene in her Uptown Chicago neighborhood. As a result, when COVID-19 hit, she immediately saw the beginnings of a story.

“The (Uptown) restaurants really reflect the broader community, and once the pandemic started, it was pretty clear early on that local restaurants and small businesses were being impacted pretty directly,” Song said. “And we’ve seen communities of color and immigrant communities face additional challenges.”

As a fellow with CatchLight Local Chicago — an initiative that works with the Institute for Nonprofit News to support Chicago-based journalists — Song partnered with a local newsroom, Block Club Chicago, to work on a long-term project.

Over the course of a few months, Song developed relationships with the restaurant owners and captured their lives through her camera lens. Song said it was important for her photos to show the owners in their work environment.

“I wanted to make it clear that for most of the pandemic, these chefs and owners have been working in places that are usually bustling, and now they’ve been empty and quiet,” she said. “That sense of quiet and emptiness is something I wanted to convey for people who saw the photos.”

When crafting her photos, Song thought about the size of the restaurants, the food they served and the aspects of the business most important to the owners. She said it was important to tell nuanced stories of these immigrant restaurant owners because of the varying reasons they entered the industry, whether out of necessity or because of a career dream.

However, Song emphasized that the three restaurants she profiled are not representative of the entire immigrant experience. She said there are over 70 small businesses in Uptown that are immigrant-owned or BlPOC-owned, and they all have their own unique stories.

“It really takes time to build these relationships,” Song said. “Speed in journalism is something that gets emphasized a lot, but for me, I’m grateful to have had the time to work on the project and make a difference.”

Jasmine Sheth, owner of Tasting India — one of the restaurants Song profiled — said the project’s focus on diversity appealed to her.

Sheth added that having someone in the room taking pictures of her while she was preparing food made her more aware of her own cooking process.

“I tend to be in my zone when I’m cooking and prepping, so having her around was interesting because it gave me a different perspective of how other people view my process and my food,” Sheth said. “She brought a lot of excitement for the food and cuisine.”

Although she hasn’t yet seen all of the photos, Sheth said her favorites were the portraits of her, where she stands with one hand on her hip as the sunlight beams down on her. Sheth said Song had a specific vision for the photoshoot, which created a comfortable flow for the afternoon.

Song’s editor, Max Herman — who is also a CatchLight Local fellow — said Song already had the concept of the project in mind when she started the CatchLight fellowship. The two would periodically check in, Herman said, to review the pictures and discuss new ways to visually represent the restaurants.

For example, Herman had been to Golden House before and spoke with Song about how to best capture the way the neighborhood favorite adapted to the pandemic.

“(The photos) bring out a feeling of nostalgia — it’s a real preservation of days past and the classic diner that has stood the test of time,” Herman said. “It was about bringing out the character of these places.”

Herman also said although Song is a multimedia journalist who “does a little bit of everything,” this project especially showcased her visual storytelling talent.

This project allowed Song to dive into both reporting and photography, since she did most of the interviewing herself, Herman said. But as compared to her previous fellowships, this particular one was more visually-based.

“This really helped prove to her that she’s more than capable of creating these neighborhood-based visually-driven stories,” Herman said. “It was a true multimedia experience, but also a visually-minded experience.”

Her photos and captions are currently on display outside the 3rd Space at 4956 N. Sheridan Road through April 27.

The exhibition will showcase the pictures on windows, Song said, with short captions in English, Spanish and Vietnamese to make it as accessible as possible. She said there will also be an in-person event on April 24 for people to try food from the profiled restaurants.

Ultimately, Song hopes the exhibition will resonate with people who view her pictures and educate them about the realities of some immigrant-owned businesses.

“I really wanted to create a space where people can look at the photos and read the stories at a slower pace,” Song said. “I’m hoping that people see the stories and see that each person has a different experience.”

— Q&A: Photographer and Northwestern alumnus Justin Barbin shares his career plans and his recipe for success in photography