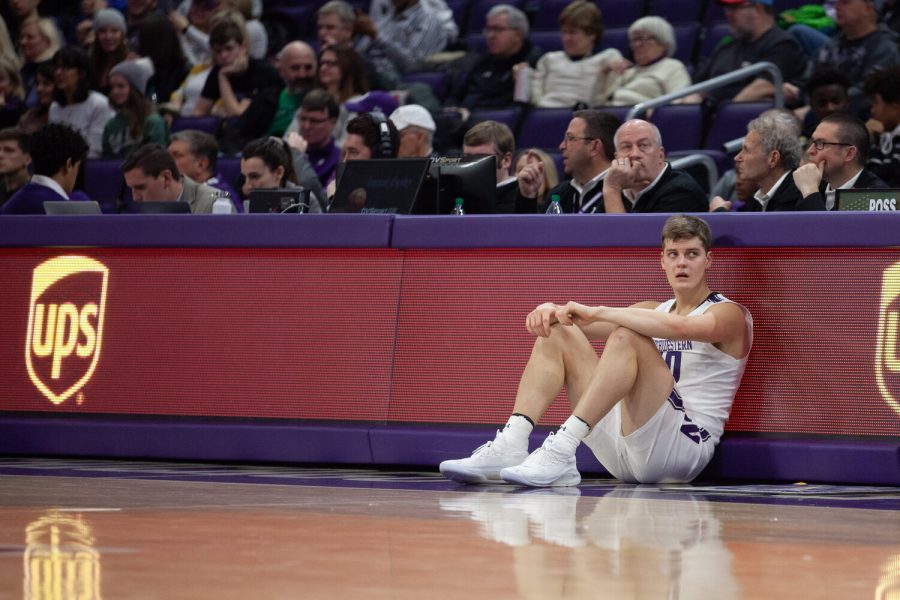 Miller Kopp sits by the scorers’ table waiting to enter the game. The junior forward announced he is transferring to Indiana.

The Houston native announced his decision to play for the Hoosiers Tuesday morning after three years at Northwestern.

Kopp entered the transfer portal on March 24 following the Wildcats’ nine-win 2020-21 season. Despite his struggles in the second half of the campaign, Kopp led the Wildcats in minutes per game (31.5) and averaged 11.3 points per game — good for the second-most on the team.

“The Big Ten will see a different player,” Kopp told ESPN. “Someone who’s a versatile player offensively and more than a shooter. Playing in the open court, playing in ball screens and more swagged up overall, to be frank.”

Kopp is the second NU player to announce a new destination for next season. Redshirt junior guard Anthony Gaines, who entered the portal on April 5, is transferring to Siena.

The Cats and Indiana faced off twice this season. In Bloomington, Kopp scored 13 points, grabbed three rebounds and dished out three assists to help NU beat the Hoosiers on Dec. 23. Nearly six weeks later at Welsh-Ryan Arena, Kopp dropped only six points on a 25 percent shooting percentage as the Cats fell in double overtime.

Following the conclusion of its season, Indiana fired coach Archie Miller and then hired longtime NBA assistant coach Mike Woodson, who played for the Hoosiers from 1976-1980.

After receiving offers from 14 schools, Kopp chose Indiana over Oregon State and Utah.

“Coach Woodson sees my potential as a versatile player and he has a plan for my development,” Kopp told ESPN. “With the NBA experience and the respect he has around the game I was curious to at least hear him out. And obviously Indiana has such amazing history and basketball culture which was appealing to me because I’d played against them for three years.”