Baseball: Northwestern falls to .500 after weekend losses to Indiana 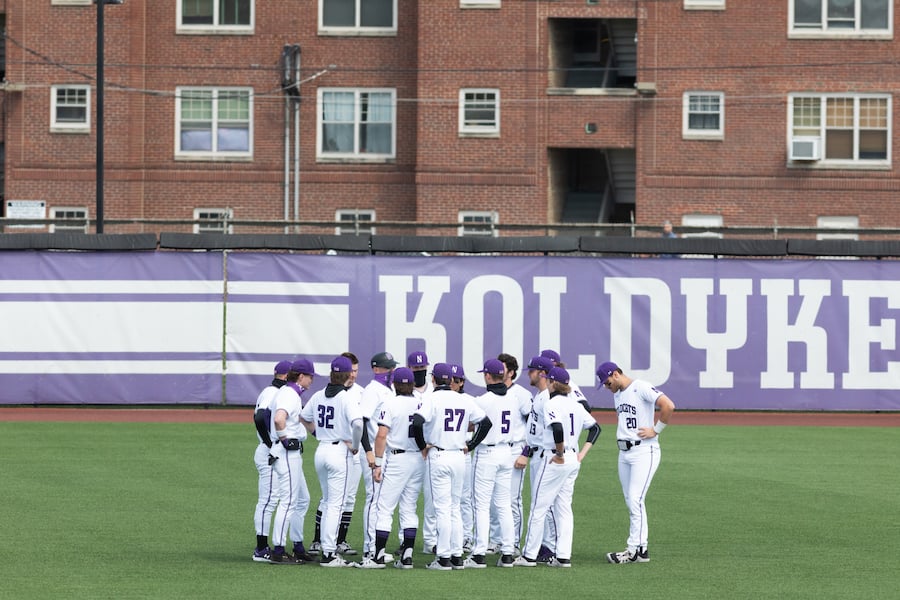 Northwestern players huddle in the outfield. The Cats dropped two of three to Indiana this weekend.

Going into this weekend, Northwestern was looking for its first series win since March. But the Wildcats couldn’t get it done, dropping two of three to Indiana and slinking down to .500 on the season.

“We just can’t keep digging holes early,” coach Spencer Allen said. “(We’re) just trying to look for a faster start offensively and not having to try to get runs late, and then just making sure we’re not giving them free stuff.”

Friday’s matchup was an exciting one, even though the Cats failed to pull out the win. The game started out poorly for NU, with junior pitcher Mike Doherty allowing two runs in the third inning and gaining another two earned runs in the top of the seventh. Headed into the bottom of the inning, the Cats trailed 5-0.

But that didn’t stop them.

A leadoff walk from redshirt junior designated hitter David Dunn got the rally started, and then four back-to-back singles drove in a pair of runs. With two outs, and the score at 5-2, sophomore left fielder Stephen Hrustich stepped to the plate.

NU battled the rest of the game, but could not put together a win, despite having a runner on second base during the bottom of the ninth.

“The guys did a good job making the adjustment getting a little bit flatter to the baseball,” Allen said. “The wind was blowing in and we hit the ball well. Their guy did a good job keeping us off-balance, too.”

However, NU made up for it on Saturday in its win over Indiana. Freshman second baseman Vincent Bianchina stole the show, blasting two home runs in as many innings.

Junior catcher Michael Trautwein said Bianchina’s emergence as an offensive contributor has been an encouraging development this season.

“He came in and from the jump immediately made a huge impact,” Trautwein said. “It’s awesome to have that guy holding down that sixth hole and give some offensive production in the middle of the lineup.”

“Their pitches came in and filled the zone up with strikes,” Trautwein said. “When you do that, you can get a lot of guys out.”

On Sunday, the Hoosiers silenced the Cats, giving up no runs and only two hits — both singles from Kaplan and freshman third baseman Tony Livermore. Indiana pitcher Gabe Bierman took a no-hit bid into the sixth inning and allowed just four baserunners across 7.2 innings before the Hoosier bullpen closed out NU.

The Cats lined up an opportunity to close the deficit in the eighth inning. NU got runners aboard with a walk and a single off Bierman to bring up junior first baseman Anthony Calarco. Junior shortstop Shawn Goosenberg — who’s tied for the most home runs in the Big Ten — waited in the batter’s box.

Instead, Calarco was caught looking on a full count for an inning-ending strikeout. Indiana then retired the final three Cats batters to seal a Hoosier series victory.

“That’s the best pitching performance we’ve seen,” Allen said of Bierman’s outing. “He’s a Friday-night type arm. You just can’t have quick outs, you have to really try to battle and fight — foul off pitches and see if there’s any free stuff he’s going to give you because he did a great, great job.”