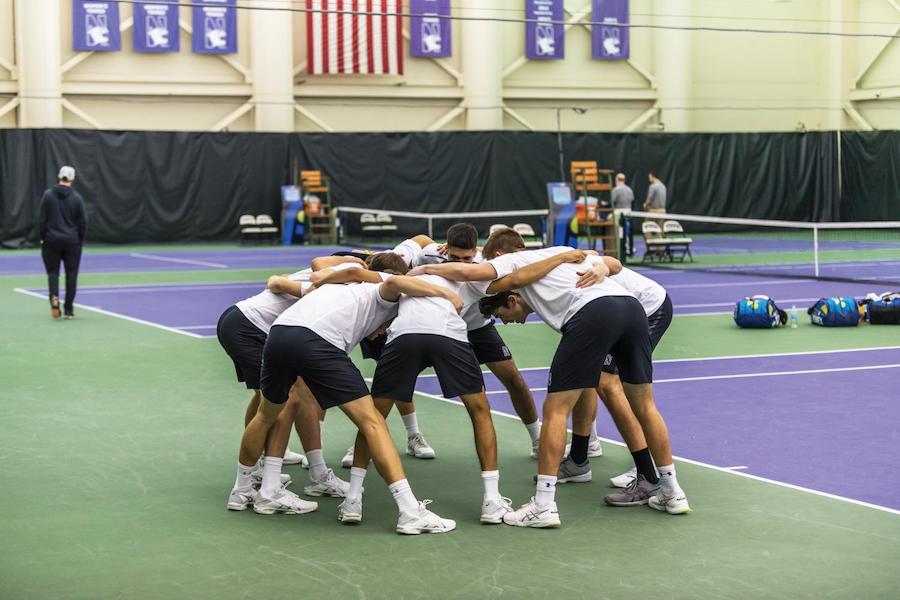 Northwestern’s team huddles on the court. Each of the Wildcats’ last nine victories has come by three points or more.

After winning seven of its past eight matches, Northwestern clinched second place in the Big Ten West last weekend.

“We’ve got strong respect for Illinois and how good they are,” coach Arvid Swan said. “We realize it’s not going to be an easy match, but I’ve got a lot of confidence in how we’re playing right now.”

Since losing to Ohio State on Feb. 21, the Fighting Illini have won 12 straight matches, including a 4-1 victory over NU in Champaign. The Cats won two of three doubles contests to claim the doubles point, but senior Nick Brookes was the only one to take a set off an Illinois player in singles.

“We weren’t able to keep that momentum,” graduate student Dominik Stary said. “We definitely underperformed after that. There are definitely lessons to be learned.”

NU has reasons to be optimistic for the rematch. In addition to playing at home, the Cats now have junior Steven Forman, who missed the first meeting with Illinois due to a wrist injury. Playing at the No. 1 individual slot, Forman is 4-0 in singles since his return.

After facing the Fighting Illini, the Cats will have to wait until at least April 29, the start of the Big Ten Tournament, to return to the court — and the squad does not yet know whether it will receive a first-round bye. Swan says NU will practice in match-like environments once the tournament nears, but he wants to focus on maintaining players’ health in the meantime, especially before their opponents are announced.

If the Cats are unable to beat Illinois on Sunday, they may struggle to qualify for the upcoming NCAA Championships. NU is 1-4 this season against opponents currently in the top 50, and the Cats don’t have a victory against a ranked conference opponent.

The match is not only crucial for Northwestern’s postseason chances, but also comes with some personal significance. For Stary and several others, Sunday will be their last collegiate event in Evanston.

“I’m super grateful to be given this opportunity to be working for (coach) Chris (Klingemann) and Arvid, because it’s just been a great time that I’ve had at Northwestern,” Stary said. “Hopefully, we’re going to be able to make the NCAA tournament, which has been our big goal.”

As their time winds down at NU, Swan had nothing but praise for the seniors and graduate students.

“I really think about those guys and how special they are and how lucky I am to have been able to coach them in the program,” Swan said. “I’m super excited to see what they’re going to do when they’re done with Northwestern because all four of those guys are special people and players.”