Lacrosse: NU to face Michigan for the first time in 2021 in regular season finale 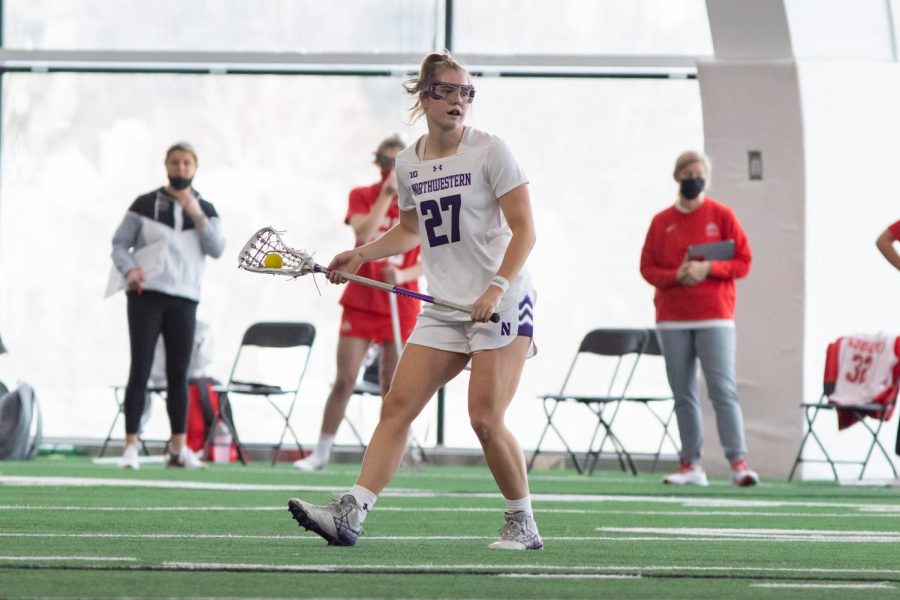 Junior attacker Izzy Scane patrols the field against Ohio State. Scane currently leads the Cats– and the nation– with 64 goals on the season and an average of 6.4 goals per game.

With an undefeated record this regular season, Northwestern will face its final test on Sunday against the only Big Ten team the Wildcats have yet to face: Michigan.

The No. 2 Cats (10-0, 10-0 Big Ten) were originally set to play the No. 17 Wolverines (3-4, 3-4 Big Ten) on April 8, but the game was postponed due to COVID-19 concerns within Michigan’s program. NU went up against Ohio State that weekend instead. The Wolverines have not competed in nearly a month due to COVID-19.

Michigan will return to play on Friday, when it hosts Ohio State in Ann Arbor before traveling to Evanston for Sunday’s matchup. The Wolverines’ last effort was an overtime loss against then No. 7 Penn State, but even without play since March, the maize-and-blue have steadily remained in the top 20. Graduate student midfielder Molly Garrett leads the team with 19 goals on the season.

NU has had a strong regular season, going 10-0 for the first time since 2012, defeating nearly every Big Ten team twice, and clinching their first Big Ten regular season title in program history. The Cats have the top scoring offense in the country, averaging 20.8 goals per game.

Junior attacker Izzy Scane leads the team — and the country — in goals, having scored 64 this season for a nation-best average of 6.4 goals per game. Senior attacker Lauren Gilbert is not far behind her, with 47 goals on the season, putting her at third in the country in goals per game and fourth for overall goals.

Following last week’s Ohio State matchup, coach Kelly Amonte Hiller said NU planned to focus on themselves prior to scouting Michigan. She said the team would look to the Wolverines’ last contest, which she called “a very solid effort,” to prepare.

“They haven’t played in a while, but we’ve been able to really lock in on things we need to work on,” Coykendall said. “We think that will best prepare us for the game.”

It has been a competitive year for the conference, with seven Big Ten teams currently ranked in the top 25 despite Maryland and Northwestern being the only teams with winning records. NU has dominated its Big Ten slate of games, winning the majority of its matchups by nine goals or more.

Coykendall said the competitive nature of the season has shown her that “anybody can beat anybody on any given day,” and not just in the Big Ten, but in any conference. She said it’s been important for the Cats to stay prepared and play their best to succeed against conference foes.

Scane stressed the same point, saying NU’s early success meant they had to be prepared for other conference teams to catch up and play more competitive games toward the end of the regular season.

“We just need to continue to work as hard as we’ve been working and also make improvements instead of staying where we are and everyone else meeting us at the top,” Scane said.