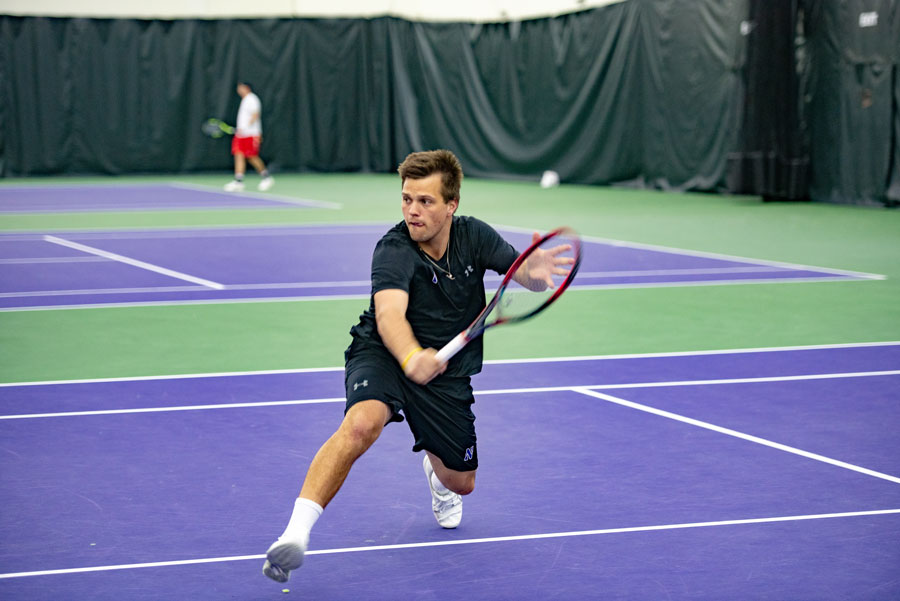 Dominik Stary prepares for a backhand return. Stary is undefeated in his last six singles matches.

“We did a nice job of taking all that doubles momentum and applying that to the singles matches,” coach Arvid Swan said.

The match came with a slew of abnormal conditions for the Cats, with inconsistent winds and Nebraska’s outdoor venue forcing the teams to play the evening match in the dark.

“We did a good job of playing well… under non-ideal circumstances,” graduate student Chris Ephron said. “It was just reiterating all the time, ‘Don’t complain about the conditions, don’t make any excuses, don’t let those conditions get into your head or make you play worse, just play the point as it is. Play smart, don’t play more reserved.’”

The Cats’ road trip continued on Sunday with a showdown against the Hawkeyes, whom NU previously defeated 6-1 on March 7. It wasn’t the Cats’ best start, as the No. 1 and No. 2 players in the lineup — Forman and graduate student Dominik Stary — both dropped their first sets to Iowa’s Kareem Allaf and Oliver Okonkwo, respectively. However, Forman and Stary went on to win in three sets, setting the tone for another 6-1 NU victory.

“We made good adjustments in doubles,” Swan said. “The singles was close early, but we were able to push forward and take control of the singles matches by the end, a really good effort from the team.”

Against the Hawkeyes, the Cats faced tougher conditions than their previous match as the maximum temperature hovered around 50 degrees Fahrenheit and winds nearly reached 20 mph, both standards for a match suspension.

The nation’s seventh-ranked doubles pairing of senior Nick Brookes and junior Simen Bratholm couldn’t overcome Iowa’s No. 10 duo of Okonkwo and Will Davies. However, NU still won two out of three in doubles and collected the point for the 11th consecutive outing.

“We play at a really high level at all three positions in doubles,” Swan said. “That’s our main focus now, up until the Big Ten Tournament.”

Continuing a red-hot streak through the weekend, Ephron and Stary played some of their best tennis yet. The two have won their last seven doubles matches as a pairing and neither has lost a singles match in April. As their time winds down within the program, Stary, Ephron and senior AJ Joshi all plan on rooming together next year, as each has secured a separate job in downtown Chicago.

In next week’s regular season finale, the Cats will face No. 14 Illinois (16-2, 13-1 Big Ten), the only Big Ten West Division foe that NU hasn’t defeated this season. The last time the two teams met, the Fighting Illini conceded the doubles point, but only dropped one set in singles.

“We just didn’t pull it out in singles,” Ephron said. “This time, if we keep up the doubles and we get another doubles point, you always like your chances.”