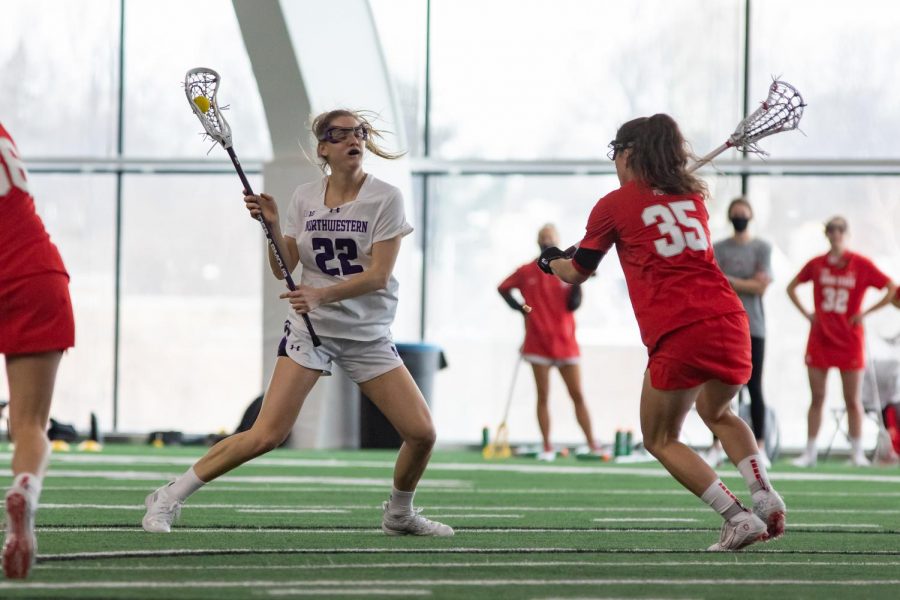 Graduate student attacker Sammy Mueller dodges her defender. Mueller, a transfer this season, ranks third on the team with 26 goals this season.

Junior attacker Izzy Scane was looking for an open teammate.

For the first time this season, No. 2 Northwestern was behind at halftime. Staring down a two-goal deficit Thursday against Ohio State, the Wildcats needed a spark.

Luckily, freshman attacker Leah Holmes was there to provide one. Scane sent the ball her way and with a stutter step, Holmes fired a quick shot over her shoulder to beat Ohio State senior goalkeeper Jillian Rizzo and make it a one-goal game.

“We talked about how we’re undefeated and we’re putting up a lot of goals against teams,” Scane said of the team’s halftime talk. “The conversation we had was, you’ve got to expect every team from here on out to come for your head, and no game’s going to come easy.”

While the Cats had never been down at halftime prior to Thursday, they had experienced narrow situations in other games. Against Maryland on March 29, NU was tied at halftime. They led Penn State by just two goals at the half on March 11 and Johns Hopkins by just three on Feb. 28. Several games where the Cats faced first half difficulties came when they faced a team for the second time, including against Ohio State on Thursday.

Because of the Cats’ dominant performance in a 23-7 victory over the Buckeyes in February, coach Kelly Amonte Hiller said Ohio State knew they had to “set the tone” coming into Thursday’s game. And they did.

Even though NU was able to defeat the Buckeyes, graduate student attacker Sammy Mueller said it is difficult to dominate against any team twice, especially during weekend double-headers.

NU’s powerful second half run against the Buckeyes was only one in a series of contests  this season where they have come up big despite shaky starts. During their Feb. 28 game against Blue Jays, the Cats went on a 5-0 run and held them scoreless for nearly 12 minutes in the second half. When playing Maryland on March 27, NU scored 12 to the Terrapins’ five during the final 30 minutes.

Amonte Hiller said the first half of games is often devoted to identifying issues with the other team’s style of play and making adjustments. She said doing so and “settling in” to play has helped the Cats.

Scane agreed with the sentiment, saying halftime adjustments have helped the team.

“The main focus is to put our heads down and work hard, and know every team is going to give their 150 percent against us,” Scane said.

Amonte Hiller said the Big Ten has been close and competitive this season and NU has to prepare for tough games, even as it has managed to “stay a little bit ahead” of the rest of the field.

“We recognize every team we play is going to give us their best shot, starting with Michigan on Sunday (April 18) and into the Big Ten Tournament,” Amonte Hiller said. “We have to be ready for that mentality and that effort, and play our game.”