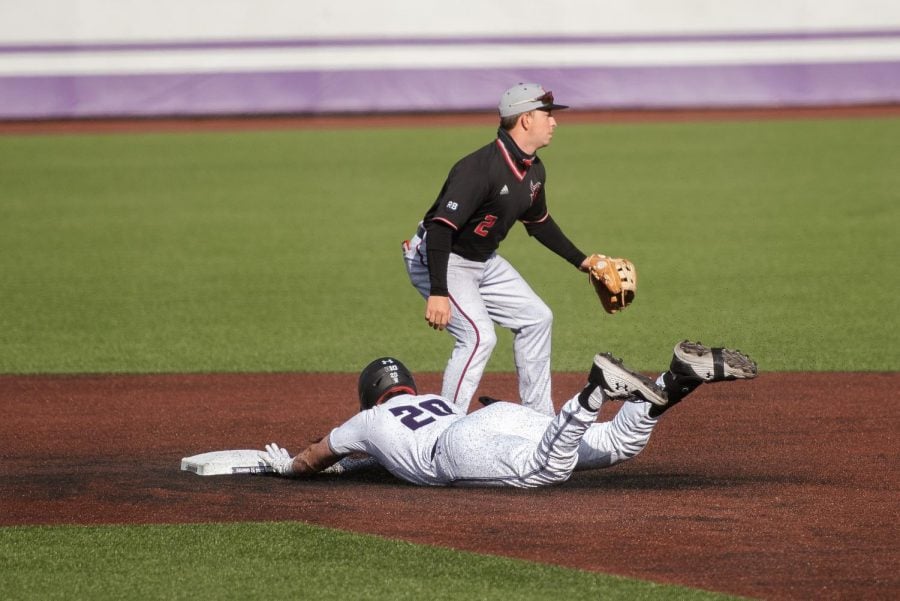 First baseman Anthony Calarco dives for the base. The junior hit a home run during Northwestern’s Friday game against Rutgers.

After five straight weeks on the road, Northwestern looked to regain traction against Rutgers in their first home series of the season.

A 6-5 walk-off in the series opener gave the Wildcats (11-10, 11-10 Big Ten) a triumphant return to Rocky and Berenice Miller Park and coach Spencer Allen his 100th career win. But the Cats fell to the Scarlet Knights (11-9, 11-9 Big Ten) in the final two games of the series. On Saturday, Rutgers defeated NU 8-4, then ended a Cats comeback bid with a go-ahead, 10th inning home run from Rutgers first baseman Jordan Sweeney.

“I was really hoping Friday would have propelled us a little bit with the comeback,” Allen said. “I think a good streak is coming for us where we’re going to get those big hits and we’re gonna make some of the plays.”

In their first game at Miller Park in over two years, the Cats’ offense blasted three home runs through the first seven innings, including a first-inning solo shot by junior shortstop Shawn Goosenberg, which gave NU a 4-1 lead into the final two frames. But Rutgers responded with two-run homers in the eighth and ninth innings to take a late lead.

Down to its last batter, NU turned to junior first baseman Anthony Calarco, who took Scarlet Knights reliever Brian Fitzpatrick to a full count before sending the ball over the right field fence and the game into extra innings.

Then, on the first pitch of the 12th inning, Goosenberg finished the job. The Encino, Calif. native smashed the ball out to deep center to finish the ballgame.

“The fashion (of the win) really probably outplayed the number,” Allen said. “Our guys coming back to win a game like that on a walk-off was pretty, pretty fun. For it to be 100 was the icing on the cake.”

However, NU couldn’t keep the momentum in its matinee matchup on Saturday. Though the NU lineup was active early with two-run home runs in the first two innings, the Cats committed five errors, including three by sophomore third baseman Evan Minarovic. Rutgers took advantage of the mistakes and cruised to an 8-4 win.

“It’s a little bit of an elephant in the room that we know we have to get better at (reducing errors),” Allen said. “We’ve done a pretty good job actually fielding the ball, which we just got to throw more accurately.”

In the third game, Rutgers pitcher Justin Sinibaldi quieted the Cats’ offense. Sinibaldi dominated in his first career start, confusing the timing of NU’s hitters and pounding the bottom of the strike zone, according to Allen.

Trailing 5-1 in the bottom of the ninth, NU had one last chance at a rally. The Cats’ strategy — get far enough down the lineup to put Goosenberg at the plate.

“Before the inning, (Allen) goes, ‘Let’s get this thing to Goose, you’ve seen what’s happened before,’” Calarco said. “Right when I got on base, I knew what was gonna happen.”

After a flyout by freshman outfielder Ethan O’Donnell, NU’s next three batters reached base with singles and closed the deficit to 5-3. The hits brought Goosenberg to the plate and the junior sent a moonshot to left field, marking his fourth home run of the series.

But the Cats couldn’t extend that momentum into the extra innings, giving up a home run in the 10th inning and losing 6-5.

“Every guy in the lineup had a part of one of our comebacks here and big at-bats, whether it’s drawing a walk, or actually the one getting the big hit,” Allen said. “The guys know that they’re in every game until the last out.”