Men’s Soccer: How Northwestern is preparing for the final postseason of Tim Lenahan’s career 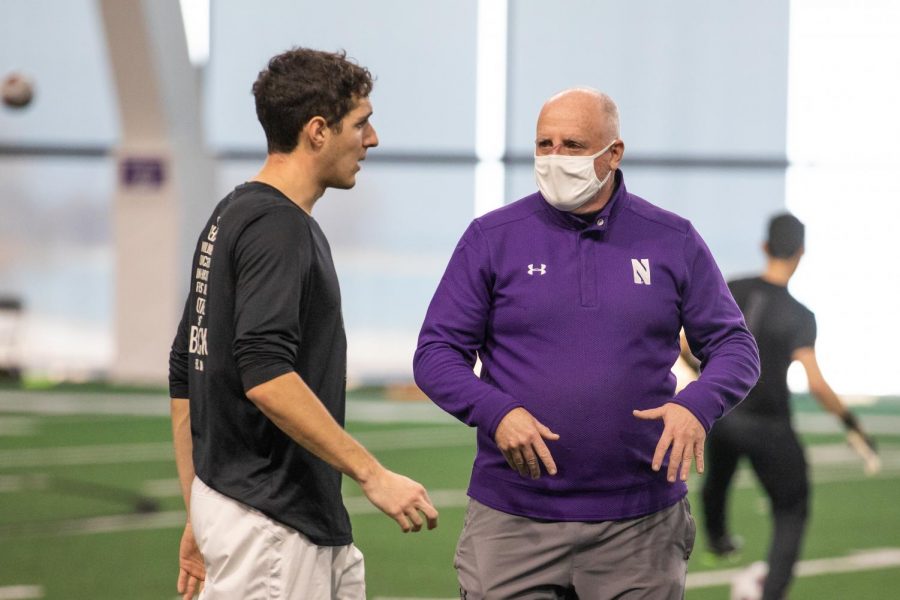 Tim Lenahan stands on the field at Ryan Fieldhouse. After coaching at Northwestern for 20 years, Lenahan is retiring following the 2021 season.

Urgency. That’s the defining factor for a team’s postseason success, according to Coach Tim Lenahan. He would know. In 20 years at Northwestern, Lenahan has led the Wildcats to nine NCAA Tournament appearances and the 2011 Big Ten Tournament title.

Saturday marks another playoff appearance for Lenahan as No. 8 NU (2-7-1, 2-7-1 Big Ten) will face No. 1 Indiana (7-1, 7-1 Big Ten) in the quarterfinals of the conference tournament. The game may also be his last. The winningest coach in Cats history announced in November that he is retiring from NU after the 2021 season.

Lenahan understands that NU — the lowest-ranked squad in the Big Ten Tournament — are underdogs against the eight-time national champions. Despite this, he is optimistic the Cats will play well against the Hoosiers, a squad NU defeated in regulation for the first time since 2009 during the regular season.

But heading into this weekend, one thing is paramount for Lenahan: his team needs to find that urgency.

“You have to have people that understand and care about their teammates,” Lenahan said. “(And) understand that the next time you lose a game, this team dies forever. It’s never the same year. You have to understand that and that’s gotta mean something to you.”

Lenahan calls urgency the fourth phase of a college player’s development — one in which athletes “play and train every practice like it’s your last.” Heading into this weekend, his players are doing just that.

According to senior defender Garrett Opperman, NU knows “it’s do-or-die time.” The team has talked about how the match against the Hoosiers could be the final game of the Cats’ season, as well as the career finales for seniors and Lenahan. With NU well aware of what is at stake, Opperman said the team’s preparation for Indiana will be crucial in order to “fuel our energy and fuel our gameplay” Saturday.

Opperman also believes that playing in what could be the final game of Lenahan’s storied coaching career will increase the Cats’ drive to win.

Following its victory over the Hoosiers on Feb. 27, NU failed to win any of its final seven games of the regular season, going 0-6-1. Three of the team’s losses, including the regular season finale against Rutgers, came in a one-score game.

Sophomore forward Ugo Achara Jr. — who scored the game-winning goal against the Hoosiers in February — recognizes that his team has not won a match in nearly six weeks.  Yet Achara Jr. believes that when NU hits its full potential, the Cats can compete with top squads like Indiana.

To prepare for the postseason, the Enugu, Nigeria native said NU is watching film and physically recovering from the regular season. He hopes these efforts will allow the Cats to extend Lenahan’s coaching career a few more games past Saturday.

“That conversation has been going on since Rutgers, on the flight, on the bus,” Achara Jr. said. “There’s a heightened sense of ‘this is it. It’s now or never.’”

After two decades in Evanston, Lenahan’s resume ahead of retirement is unquestioned. He led NU to more than 150 wins, mentored 44 All-Big Ten selections and turned the school on the shores of Lake Michigan into a contender for both conference and national championships.

Two days from now, Lenahan may step off the sideline as the Cats’ coach for the final time. But until then, he and his team are right where they want to be: chasing a Big Ten title.

“They’ve said all along that… you can’t do that and you can’t do this at Northwestern,” Lenahan said. “And we did it and there’s another epic opportunity as the underdog to prove everyone wrong once again.”