As election results finalize, City Council could see up to four new aldermen 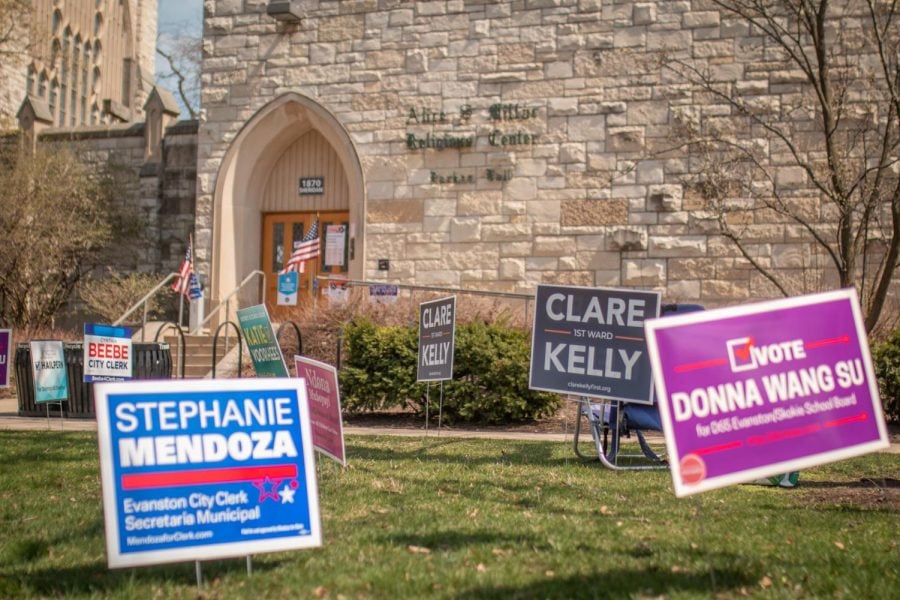 After months of campaigning, and a tumultuous final four weeks leading up to the generals, Evanston’s 2021 municipal elections came to a close Tuesday night.

When the dust settled, City Council saw three new aldermen emerge — with a potential fourth leading in a race that remains too close to call.

As of Wednesday night, the margin of victory in three races is within 100 votes. Candidates in the 1st, 2nd and 8th wards are waiting as remaining mail-in ballots trickle in, votes that could decide the race. Approximately 3,000 mail-in ballots were sent out to residents, and those votes can be postmarked as late as April 6, meaning some may still be in transit.

In the 1st Ward, challenger Clare Kelly leads incumbent Ald. Judy Fiske, who has served the ward since 2009. Just 39 votes separate the two, with Kelly at 555 and Fiske at 516. If she’s victorious in the final count, Kelly would be the lone candidate to oust a sitting alderman in the general election. Alds. Don Wilson (4th) and Ann Rainey (8th) were defeated in the city’s Feb. 23 primary.

The 1st Ward race was one of the most contested throughout the election cycle, with both candidates coming under fire throughout the campaign. A February newsletter from Fiske contained language which local activists described as coded racism, and Kelly was criticized by Evanston Together LLC, a political committee whose list of top contributors included Mayor Steve Hagerty.

Across the city in the 2nd Ward, Ald. Peter Braithwaite has an 88-vote lead over challenger Darlene Cannon. Braithwaite was appointed to his seat in 2011, and ran uncontested in 2013 and 2017. His competition with Cannon was also the subject of mailers from Evanston Together, which endorsed him and opposed Cannon.

Cannon, a board member of the Democratic Party of Evanston, announced Wednesday she has no plan to admit defeat while ballot counting is still underway.

“Dearest community, you have held this campaign high and with conviction; we are not conceding,” she wrote in a statement.

Meanwhile, two aldermanic newcomers squared off in the 8th Ward on Tuesday: City Clerk Devon Reid went up against Ridgeville Park District Commissioner Matthew Mitchell. As of Wednesday, Reid was up by 46 votes. Mitchell told The Daily on Wednesday morning he didn’t expect outstanding mail-in ballots to change the result of the race, and said he looks forward to seeing changes in the 8th Ward in the coming years.

Nieuwsma and Burns will join at least four incumbent aldermen on the dais in May, as Alds. Melissa Wynne (3rd), Thomas Suffredin (6th), Eleanor Revelle (7th) and Cicely Fleming (9th), appear to have all won re-election to their seats. As final votes are tallied in the coming days, only time will tell who will officially fill the last three spots on the council.