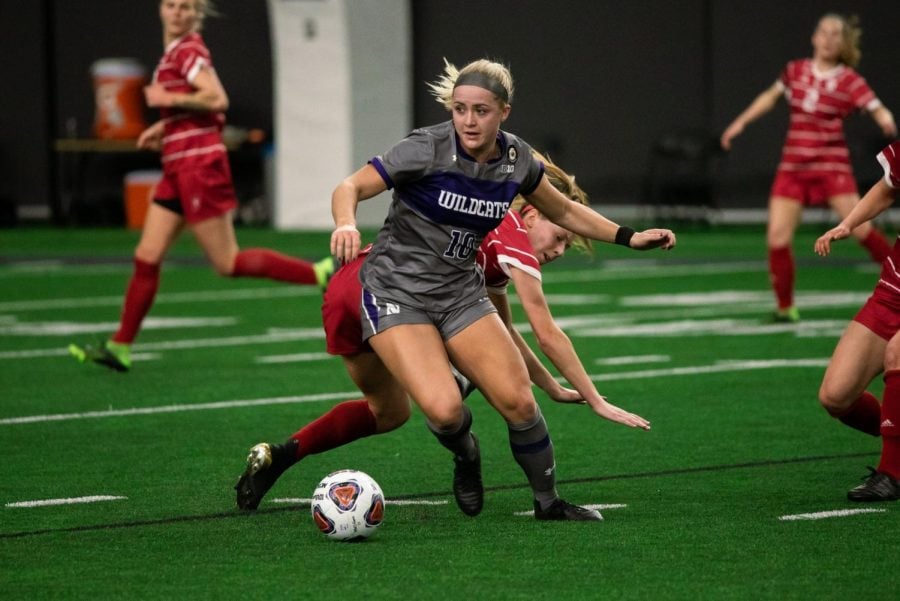 Junior forward Olivia Stone dribbles down field. Stone and the Wildcats lost their regular season finale against Illinois 2-1 on Saturday.

The Cats led the Fighting Illini for the majority of the game, as senior midfielder Regan Steigleder scored the team’s lone goal just 14 minutes in. NU had several offensive opportunities during the second half, but missed all of its ten shots. Illinois senior goalkeeper Sami Sample played a big role in that, making five saves to hold off the Cats.

Illinois tied the game up with about 20 minutes left, with a goal by freshman forward Zoey Kolhoff. From there, the game was nearly statistically even: both teams had four shots, Illinois made three substitutions to NU’s two and NU had three fouls to Illinois’ two. But Illinois sophomore defender Kendra Pasquale made one of those four shots, securing the game-winner for the Fighting Illini with just a little over a minute remaining.

Coach Michael Moynihan said the loss was “frustrating,” particularly because of the many offensive chances the Cats had and missed in the second half.

“We created more than enough chances to win,” Moynihan said. “We had the lead almost the entire game. To concede to pretty sloppy goals was disappointing.”

Sophomore midfielder Lily Gilbertson had four shots, all of which came in the second half. Gilbertson said it was a “tough loss” because it likely lowered the Cats’ seeding in the Big Ten Regional Weekend, but she felt it was a “hopeful performance” as the team prepares for the postseason.

“We had a lot of good opportunities and we were super close,” Gilbertson said. “We just have to finish off some of those opportunities, and we’re going to continue to work on that and focus on Purdue.”

Despite the outcome, Moynihan said he was impressed with the Cats’ offense and how they “dictated large portions of the game.” Like Gilberston, he said he would like for NU to build on their offensive momentum and finish more of their shots.

As part of Senior Day, some fans and families were allowed to attend for the first time this season. The team honored seniors Steigleder, Nia Harris, Kayleigh Stahlschmidt, Madi Kennel and Kylie Fisher during a pre-game ceremony.

Steigleder will return for a fifth-year season this fall. Still, she said, she is “very sad” to see her class leave.

Unlike in previous years, seniors did not get to bring their parents onto the field. But Gilbertson said having friends and family there encouraged the team to perform.

The Cats will return to play against the Purdue Boilermakers on Thursday. Moynihan said the turn-around time between the regular season and postseason is short, but the team plans to focus on getting in the right mindset ahead of then.

“A big piece for us is what mentality we take going in,” Moynihan said. “Do we go in thinking, ‘woe is me, we didn’t finish where we wanted,’ or do we say, ‘we’re really close, and a lot of those games (we lost) we had in us to win?’ It’s just one game at a time, but a lot of it is trying to develop the right mentality and confidence going in.”