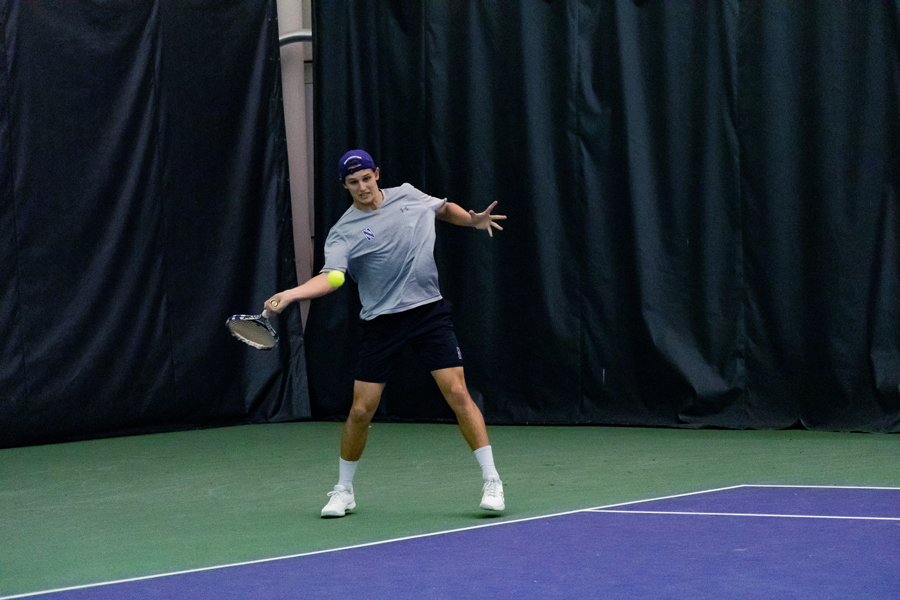 Chris Ephron sizes up a return. Between matches against Minnesota and Wisconsin, Ephron went 4-0 across both doubles and singles.

No. 47 Northwestern (10-5, 9-4 Big Ten) snatched victories on Friday and Sunday, continuing to ascend in the Big Ten standings.

On Friday, the Wildcats avenged February’s away loss to Minnesota (7-6, 7-6 Big Ten) with a 5-2 win in Evanston. The match was headlined by junior Steven Forman’s return to No. 1 in the singles order. Forman, who suffered a wrist injury over the summer, made his 2021 season debut during a doubles match on March 19.

“He’s such a big part of our program, he does everything right,” coach Arvid Swan said. “It’s great to have a guy who’s that good of a player, but who also cares so much about his teammates, about his own game and being well prepared.”

Swan followed Forman’s rehabilitation process over the past months, saying the junior was “making every effort” to fully return to the court. After dropping his first singles set to the Golden Gophers’ Jackson Allen, Forman battled back to capture a 3-6, 6-2, 7-6 (7-3) win.

“I couldn’t expect to necessarily play my best the first singles match I’ve played in about nine months, but I just had confidence that I could play better,” Forman said. “IIf I could just execute a little bit better, be a little sharper, then I thought I had a good chance.”

While the doubles pairing of graduate students Dominik Stary and Chris Ephron dismantled Minnesota’s Vlad Lobak and Bodin Zarkovic, Forman and sophomore Natan Spear needed a tiebreaker to secure their set and the overall doubles point. The Cats didn’t relinquish the lead after that.

“We did a better job of maintaining the advantage that we had from doubles into singles, and we were able to get up to a 3-0 lead,” Swan said. “That put a lot of pressure on Minnesota once (we had) three on the board, just needing one more.”

NU continued the momentum into Sunday, defeating Wisconsin (4-10, 4-9 Big Ten) for the second time this season. Five of the Cats’ six singles showdowns finished in straight sets during the 7-0 result. NU won all four tiebreakers in the shutout, including both sets of Forman’s 7-6 (7), 7-6 (0) victory over the Badgers’ Jared Pratt.

“There’s always some luck to it, but I executed well and found a way,” Forman said. “The second tiebreaker, I got off to a good start. That’s always important.”

Other NU players enjoyed more comfortable paths to individual victories. Swan said Stary and Ephron have been a “really strong doubles pairing,” with Stary in particular bringing a “tremendous amount of experience” to the No. 2 spot in the Cats’ lineup.

Wisconsin was the last team to take the doubles point from the Cats. Sunday marked nine straight matches where NU earned that early advantage.

“We’re one of the better teams in the country in doubles,” Swan said. “We’ve got a system that we play that works well with a lot of different game styles. Even when we’ve lost a doubles point, it’s been close.”

NU’s upcoming road matches against Nebraska (1-11, 1-11 Big Ten) and Iowa (4-10, 4-8 Big Ten) will pose new challenges. Swan said their facilities and court speeds are different from NU’s, meaning the Cats will have to adjust.

“Getting used to those conditions and potentially those matches being outdoors, with Nebraska being an early evening master, potentially playing under the lights is a different experience,” Swan said.

Despite the unfamiliar conditions, Forman plans on preparing for the match as he always does.

“(I’m) just focusing on trying to prepare as best I can to play as well as I can,” he said. “Physically, mentally, everything.”