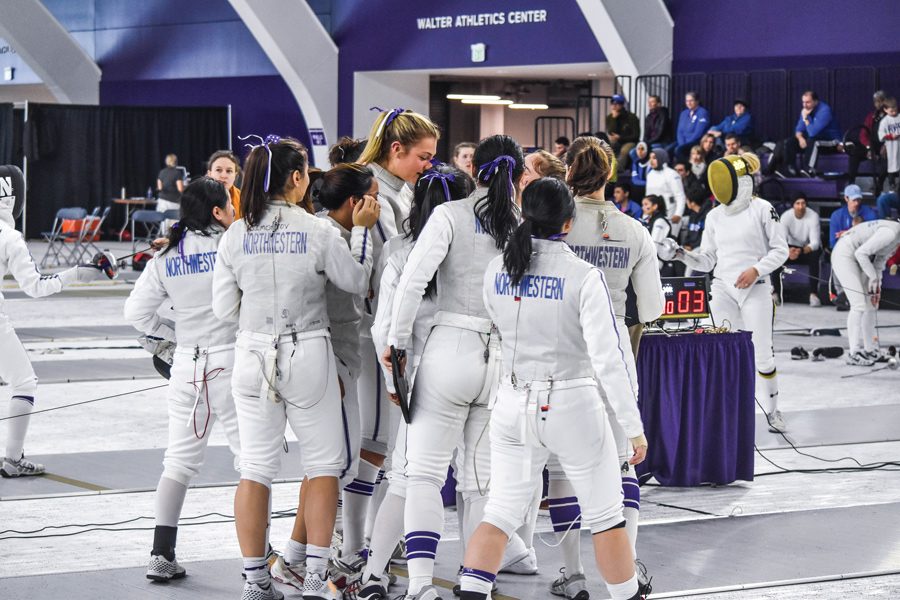 Northwestern celebrates after a bout. The Wildcats sent six fencers to the NCAA championships this year.

In his five years as head coach at Northwestern, Zach Moss propelled the Wildcats to nationally ranked relevance. The Wildcats have become a fixture in the NCAA Top 10. After a sixth place national finish in the 2019 campaign, the Cats looked to perform even better.

NU (17-9, 0-0 Big Ten) surpassed its ranking from two years ago — making history at the same time by achieving an all-time best third-place finish.

“I’m really proud of our team,” Moss said. “Previous to this, we’d only ever finished sixth, so this is a really big jump for our program.”

The Wildcats saw six fencers—the second time in program history— qualify for the NCAA championships, the maximum allowed to represent one school.

“It felt really unreal,” Miller said. “It’s not every day that I do that well.”

Miller had a stellar season to start her college career, posting winning records nearly every weekend and turning out a dominant 3-0 performance in the Cats’ second meeting with Notre Dame.

With three years left on the team, Moss said he thinks the freshman from Durham, N.C. has the potential to be the team’s first ever individual champion.

The Cats’ success on a national stage was a product of a tumultuous season. With much of the season cancelled due to COVID-19, NU played less than half of a season’s usual matches.

The Wildcats struggled early on, going 2-4 in the season’s first invitational. However, the team steadily improved, losing only one match to teams not named Notre Dame. The Fighting Irish (16-0) finished with a perfect record this season, placing first in the NCAA championships.

NU played the last matches of the season in Columbus, facing off against Ohio State and Denison in two matches apiece. With much of the schedule in flux, these final matches were not on the team’s initial calendar.

“It was a late add to our schedule, so we weren’t really planning for it,” Moss said. “But it was a great opportunity to get some more experience and help us get primed for NCAA championships.”

The Cats had their best weekend of the year at Ohio State, sweeping both Denison and the Buckeyes to clinch a share of the Central Collegiate Fencing Conference title.

“We always want to be a conference champion,” Moss said. “So it’s really meaningful. I’m really happy that the team was able to accomplish that.”

NU’s momentum carried into the NCAA championships, and Miller said she hopes to carry that momentum into next season as well.

“This is our best performance and we were not working with our full capacity,” she said. “So I see it going very far in the future.”