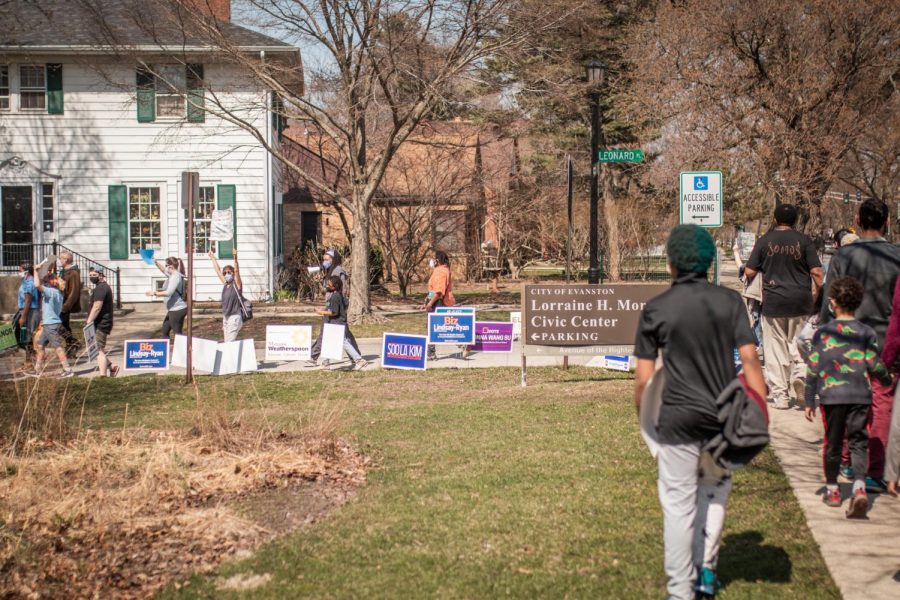 Participants march on the sidewalk past the sign for the Lorraine H. Morton Civic Center. District 65 parents of color led a march to the polls Saturday.

“We as a community need to vote like all Black and brown lives matter,” said Karla Thomas, (Kellogg MBA ’05) a march organizer and mother of two children in the district. “Not just put signs in our yard. Not just speak to the matter, but take action.”

A multi-racial group of around 50 community members marched from Trahan Park to the Civic Center, shouting chants that included “Vote like Black lives matter,” “Vote like Black futures matter” and “Vote like Black joy matters.” Throughout the march, some participants dropped campaign cards on doorsteps while organizers played music. Participants were encouraged to vote and contribute to a community art installation being created in a nearby park. A rally followed shortly after, with members of Evanston Latinos also joining the event.

The event, organized by several District 65 parents, including Tracy Olasimbo and Anya Tanyavutti, came just days before the April 6 election and amid a contentious school board campaign. District 65 board candidate Elisabeth “Biz” Lindsay-Ryan — who was endorsed by march organizers — was recently targeted in a homophobic hate crime. Similarly, emails containing derogatory and harmful remarks were sent to school board members in the months preceding school reopenings.

Thomas told The Daily this election season has been “markedly more overcome with acts of White violence.” In the months leading up to the election, the push for a return to in-person instruction, as well as attempts to defund existing equity initiatives, have caused district-wide conflicts which directly impact marginalized communities, Thomas said.

As a result, Thomas said community members organized the march in an attempt to prompt change.

Upon reaching the civic center, resident Hope Jones, a mother of two sons in the district, cast her vote and said she appreciated the event’s emphasis on actionable civic participation.

“This will show my kids that not only is (it) important to raise your voice and let it be heard, but there needs to be an action behind that,” Jones said.

Eva Martin, a first grade dual-language teacher at the Dr. Bessie Rhodes School of Global Studies, said District 65 is on the right track in terms of equity and inclusion. As a Mexican resident, Martin said that for the first time, the current board is representative of herself and her students, who are mainly Black and Latinx.

Martin said her experiences with the candidates supported by the organizers have convinced her they’re “racially literate” and will follow through with equity initiatives. She doesn’t trust some of the challengers to do the same.

“I am here because it’s important for my teaching, for my students,” Martin said. “I am an Evanston resident, and I know my taxes are going to the right place.”

At the event, former mayoral candidate and community activist Sebastian Nalls said many of his former classmates of color never wanted to return to Evanston because of the racism and vitriol they endured in Evanston schools. The city, he said, fails as a community when its “youth feel that this is not home to them.”

Oyadi said the community must promote inclusion for all students, especially those who are disabled, neurodivergent and “not diagnosed, but needing support,” because they are “imbued with a genius” not recognized nor allowed to grow under the existing paradigm.

For Thomas, the union between disability activists and activists of color means solidarity in numbers. She told The Daily marginalized groups are often systemically pitted against each other, even though their shared goals have been poised toward ending White supremacy.

Update: This story has been updated to reflect District 65 parent Anya Tanyavutti’s involvement with the march.

— In months prior to reopening, District 65 board, superintendent received hate mail, threats