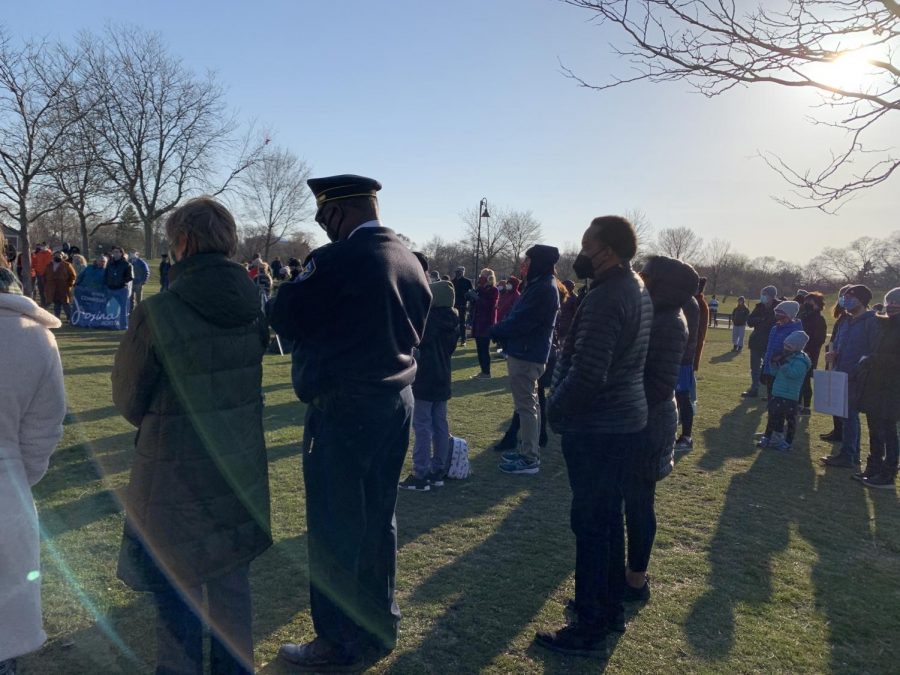 Evanston residents gather at a vigil in Lovelace Park Thursday to stand against Asian hate and honor the deaths of eight killed in the March 16 Atlanta shootings.

Maricar Ramos, executive director of Evanston Cradle to Career, donned a bright red jacket as she spoke to over 150 Evanston residents during a Thursday vigil at Lovelace Park.

The vigil provided the community a space to stand in solidarity with Asian Americans and Pacific Islanders and against White supremacy.

Ramos said she frequently speaks out against racism towards Black and brown communities. But as a Filipina woman, she said speaking at Thursday’s vigil was more challenging because she had to make herself vulnerable.

All speakers at the vigil emphasized how members of the Asian American community have endured exclusion, fetishization, erasure and invisibility for hundreds of years in America.

“In the workplace, I have been patted on the head, complimented for my English, and once even asked, ‘How much, baby?’” Ramos said.

Ramos later told The Daily “the implication of an Asian woman exchanging sex for money, as another layer of being both harassed and objectified, resonated with many in the audience.”

Seven community members spoke at the vigil including Ramos, Morita, Gong-Gershowitz, U.S. Rep. Jan Schakowsky (D-Evanston), Rev. Michael Nabors and Rabbi Andrea London of Beth Emet the Free Synagogue. Rev. Asayo Horibe of the Buddhist Council of the Midwest began the vigil by asking attendees to press their palms together and greet their neighbor.

“I wish I could tell my younger self that I don’t need to hide my Asian identity,” Yang said, “because protecting it means standing up for it.”

While she is now proud to speak about her and her family’s stories, Yang said growing up, she was mocked for being one of the few Asian students at school. According to the Illinois State Board of Education, Asian Americans make up just 5.8 percent of the ETHS student body.

While she was initially hesitant to speak at the vigil, Yang said she eventually changed her mind because the event was an opportunity to broadcast her voice to the larger Evanston community.

Gong-Gershowitz said the Atlanta shootings represented a tipping point for many Asians and Asian Americans who are fed up with rising incidents of anti-Asian hate speech, violent attacks against Asian American elders and centuries of being silenced.

Ramos said White supremacy culture perpetuates harmful rhetoric against Asian Americans and all people of color, even in a liberal and progressive city like Evanston.

“I need things to be different,” Ramos said. “I need us to actually change our behavior in our daily lives so that we are no longer causing harm to Black, Indigenous and people of color every single day of their lives.”

Gong-Gershowitz stressed the intersection of racism, misogyny and the “epidemic” of gun violence that precipitated the shootings, and said she hosted Thursday’s vigil for the Evanston community to stand together against all forms of hate.

As a state representative, Gong-Gershowitz said she has worked to ensure Asians and Asian Americans are no longer invisible.

“I feel seen, quite possibly for the first time in my career,” Gong-Gershowitz said in reference to the Atlanta shootings. After a pause, she continued, “What’s heartbreaking is that it took a hate-fueled act of violence for people to finally stop and take notice.”

— Defining Safe: The spread of Coronavirus and anti-Asian racism