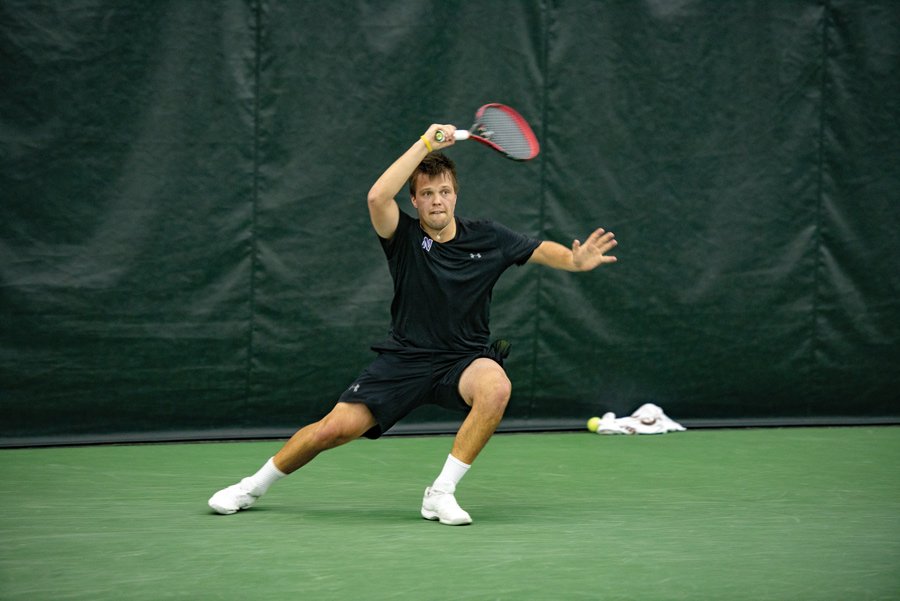 On the heels of three straight shutouts, No. 47 Northwestern (8-5, 7-4 Big Ten) was brought back down to Earth last Sunday by No. 24 Michigan.

After the Wolverines snapped the Cats’ victory streak, the Wildcats will look to return to their winning ways against Minnesota (7-4, 7-4 Big Ten) on Friday and Wisconsin (4-8, 4-7 Big Ten) on Sunday.

As the Wildcats enter the final third of the regular season conference schedule, coach Arvid Swan remains optimistic despite his team’s 4-2 defeat.

“Sometimes, you play a really good match and the other team wins. I give full credit to Michigan,” Swan said. “We won the doubles point, Michigan is one of the best doubles teams in college tennis. We were in a position to win against a team that is really, really good. It didn’t go our way that day.”

The doubles point has been key for the Cats all season, as the team has won it in each of their last seven matches.

“Doubles is huge in terms of momentum,” Swan said. “I’ve been really happy with how we’ve been playing doubles. We’ve had different pairings at times, but the guys are buying into our system of how we play and executing really well under pressure.”

Northwestern’s last showdown with Minnesota ended in a 3-4 loss, as Sebastian Vile overcame a set deficit to earn the decisive singles point over sophomore Simen Bratholm.

“We’re going to have likely slightly different matchups,” Swan said. “Both teams know each other really well. Over the last eight years or so, almost every match has come down to 4-3. It feels like it’s just two very competitive teams playing each other.”

The Wildcats emerged victorious in Madison the last time they met Wisconsin, also by a 4-3 score. Bratholm, along with senior Dominik Stary, junior Nick Brookes and freshman Presley Thieneman all claimed victory in singles matches.

Swan said given the familiarity of the opponents, his players should mostly know what to prepare for. This slightly reduced attention to new scouting has allowed them to focus on execution against the Badgers, he said.

“When we played them up in Wisconsin, they played good doubles,” Swan said. I thought they competed really well. A big goal would be to try to take the doubles point this [time] and try to have some momentum going into singles.”

With the postseason looming, NU’s borderline top 50 ranking would likely have the team on the outside looking in if the NCAA Men’s Tennis Championship began tomorrow. That said, there are plenty of remaining opportunities to earn quality wins, including the regular season finale against Illinois (12-2, 9-1 Big Ten).

“The NCAA always puts high priority on how you finish the season,” Swan said. “Our focus is really just Minnesota first, and then Wisconsin, and then try to stack some more wins in our favor and give us the best chance to play beyond the Big Ten Tournament.”

— Men’s Tennis: Their season derailed, Northwestern reflects on an unresolved year and looks to the future with cautious optimism