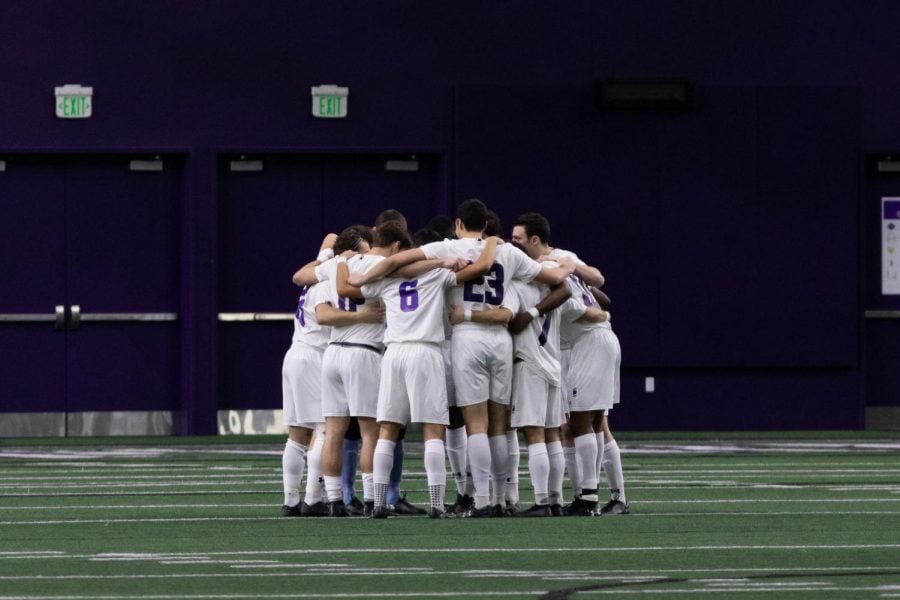 Just over one month ago, Northwestern seemed poised to make a run at its first Big Ten regular season title since 2011.

Holding a 2-1 record, the Wildcats sat in the top echelon of the conference and rode high after beating eight-time national champion Indiana in regulation for the first time in more than a decade.

With sophomore forward Ugo Achara Jr. scoring three goals in three games and senior goalie Miha Miskovic notching a shutout against the Hoosiers, the Cats showed they could succeed against the best teams in the Big Ten. Additionally, NU’s chances to win a conference title in coach Tim Lenahan’s 20th and final season looked very possible.

But near the midway point of the season, the tides turned against the Cats.

In its last six games, NU has lost five contests and tied one. The team has been outscored 13-4 and outshot by 47 attempts. Wisconsin — who the Cats defeated 5-2 earlier in the season — drew NU 1-1 in Evanston, while Indiana avenged its loss by beating the purple-and-white 3-0 at home. Additionally, Maryland spoiled Lenahan’s final regular season home game with a 2-1 victory.

NU’s chances of attaining a Big Ten regular season championship are no longer feasible. However, a Cats (2-6-1, 2-6-1 Big Ten) victory on Sunday against Rutgers (3-4, 3-4 Big Ten)  would notch a successful conclusion to a difficult 10-game, conference-only regular season.

The Scarlet Knights are looking to break a three-game losing streak of their own this weekend in Piscataway. Coming off two straight postponed contests, Rutgers is seeking its first win since March 3 against Maryland. NU’s last victory — against the Hoosiers — came four days before.

Behind the goalkeeping of Oren Asher, the Scarlet Knights give up only 1.43 goals per game. As a result, the success of the Cats’ offensive attack will be a key to victory.

Achara Jr. — who leads the team with 11 points —  has failed to score in NU’s last three games and the Cats have not found the net in three of their five most recent contests. But the purple and white’s offense has recently shown signs of promise.

The team fired their third-most shots of the season against the Terrapins and freshman midfielder Rom Brown — who Lenahan called a “special playmaker” earlier in the season — scored his first goal of 2021 in the match.

Defensively, the Cats will look to players like graduate student Spencer Farina and sophomore Deng Deng Kur to slow a Rutgers offense that averages nearly 10 shots and just over one goal per game.

NU last faced the Scarlet Knights on Oct. 20, 2019. During that afternoon in Evanston, the purple-and-white held Rutgers to three shots in a 2-0 victory at Lanny and Sharon Martin Stadium.

In the final regular season game of Lenahan’s storied coaching career, the Cats will look to achieve similar results.