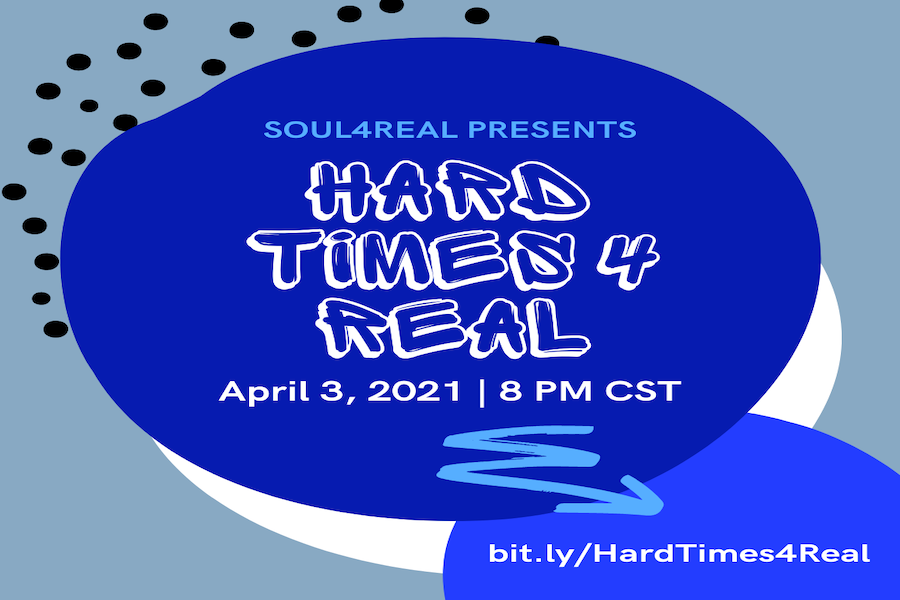 Soul4Real a cappella group’s upcoming virtual concert, Hard Times 4 Real. The group is performing for the first time since the pandemic’s onset.

In reflecting on the pandemic year together, members of Northwestern’s premier African-American a cappella group Soul4Real said hard times encapsulated the realities of their experience.

Soul4Real will broadcast its first virtual concert on April 3, over a year since the group’s last in-person performance in early 2020. The concert’s theme, “Hard Times 4 Real,” centers around songs about “how we’re getting through these hard times,” Sophia Simon, the group’s president, said.

“We still really wanted to be able to perform and provide music to our community and the people who follow our group,” said Simon, a Communication junior.

Drawing inspiration from the virtual concerts other college a cappella groups put on, the group got together over the summer to plan for their own concert.

Soul4Real Music Director Mia Hodges said producing the concert provided unique difficulties as the group navigated the virtual format. To streamline the process, the Communication junior said the team spent two weeks learning each song. At the end of the two-week period, the members would record themselves on their phones.

“I pride myself and the group on how collaborative we are, but this (process) can’t be as collaborative as we would like it to be,” Hodges said.

After gathering all of the recordings, the group’s voice editors spliced them together to create the final product. Hodges said she was especially impressed with new members’ meaningful contributions to the group.

Although they only joined in Winter Quarter, the new members brought valuable insights about the virtual format of the concert, according to Hodges.

“Everyone has brought something new to the table because their college experience being entirely online provides a new perspective,” she said. “I’m so happy with the connections we’ve all been able to make with the new members.”

One new member, Weinberg freshman Olivia Pierce, said she immediately felt a sense of family and belonging after joining the group in January.

Although the group had a lot to do to prepare for the concert, Pierce said it never felt like work because group members always had fun rehearsing and recording.

“They’re really open and welcoming,” Pierce said. “I’m really excited that (the concert) is virtual because more people can come… we just saw a sneak peak and it looks really good.”

Omari Benjamin, a Weinberg junior and the manager of Soul4Real, said there was a silver lining to the virtual format.

Not only did the members not have to focus on memorizing their parts, Benjamin said they also had fun recording their parts, even though they weren’t physically together.

“My favorite and least favorite part was trying to record our videos over Zoom because it’s really difficult with the lag but could also be really funny,” she said.

Benjamin said she is looking forward to audience reactions, since it’s been so long since the group performed. She also said she is personally excited to see the concert, as the group has not yet seen the final product.

Ultimately, Simon said she has most enjoyed seeing the group adapt to the new format. Even though she has never produced a virtual a cappella concert before, Simon said the overall process was positive.

“I’ve been able to see how talented everyone in the group is and how willing they are to be flexible, given this is our first virtual performance,” Simon said. “I’ve been feeling deprived of my Soul4Real family, but I’m looking forward to being together again.”