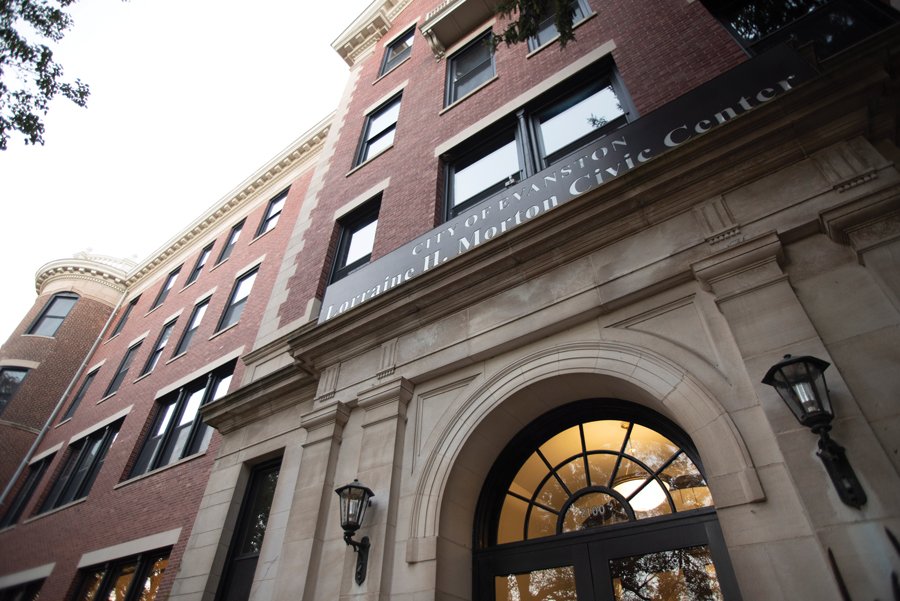 The Lorraine H. Morton Civic Center. Ahead of the April 6 municipal elections, a local political group has organized in support of a manager-council form of government, despite the issue being a limited point of discussion throughout the campaign cycle.

In the weeks leading up to the April 6 municipal elections, Evanston Together LLC, a recently formed political organization, has become the subject of a citywide controversy after sending a series of mailers endorsing five aldermanic candidates — four of whom are incumbents.

The political committee formed on March 10, according to documents filed with the Illinois State Board of Elections. According to state law, any group that has raised or spent at least $5,000 in the span of a year, and backs or opposes a political candidate or public policy, is required to file with ISBE. Since forming, the group started an advertising campaign centered around an issue that received minimal airtime this election cycle: Evanston’s form of government.

The discussion stemmed from a question posed at a March 2 candidate forum hosted by NAACP Evanston/North Shore Branch. Candidates were asked whether they wanted to keep a council-manager system — the existing form of city governance —  or shift to a strong mayor government.

Evanston is primarily run by a city manager appointed by City Council, who takes on the city’s day-to-day administrative decisions. Under this system, the mayor serves as a point of contact between community members and City Council, but the role is part-time.

The other model, a strong mayor system, would give an elected mayor most responsibilities of city management. During the forum, some candidates said they were open to re-evaluating the city’s current system and considering the strong mayor form of government — a position Evanston Together says would be “radical change” if those candidates get elected. Under the Illinois Constitution, a change to Evanston’s government system would require a citywide referendum.

As a result, the organization has campaigned against four challengers — Clare Kelly, Darlene Cannon, Nicholas Korzeniowski and Mary Rosinski — as well as incumbent Ald. Tom Suffredin (6th). Candidates targeted in the mailers told Evanston Patch the advertisements didn’t accurately represent their views. Ald. Judy Fiske (1st), who is endorsed by the organization, told WGN her campaign is not affiliated with Evanston Together.

Some of the language in the mailers mirrors the wording found in an early March email sent to dozens of residents inviting them to a Zoom call to organize against “anti-incumbency” efforts. Dick Peach, one of the two people listed as members of the organization, was a cosigner of the email as well.

Peach is listed as Evanston Together’s treasurer on the filing form. He, along with Marya Frankel, the group’s chair, is one of the only members who have publicly identified with the group. With limited information publicly available about its membership, the group plans to reveal its donors Thursday, just days ahead of the election.

The group has also come under fire for its use of what critics have described as “dog whistle phrases,” comparing the potential change in government style to nearby Cicero where a strong leadership format is in place. The mailers imply the suburb, whose residents are nearly 90 percent Latinx, doesn’t provide a desirable form of government for its residents.

In a March 28 statement, Mayor-elect Daniel Biss said the Evanston Together mailers’ rhetoric is “divisive” and seeks to capitalize on an issue that isn’t the focal point of any candidate’s campaign. While he said a shift in the city’s form of government isn’t a priority for him, he is open to exploring the option if it’s required to fix existing issues within the city.

“I’d prefer to see (these issues) fixed within the confines of the current form of government, if for no other reason than because the change would be very disruptive,” Biss wrote in the statement. “But if we aren’t able to do that, we should be open to changing the form of government. That’s what I said during my campaign, and it’s what I continue to believe today.”