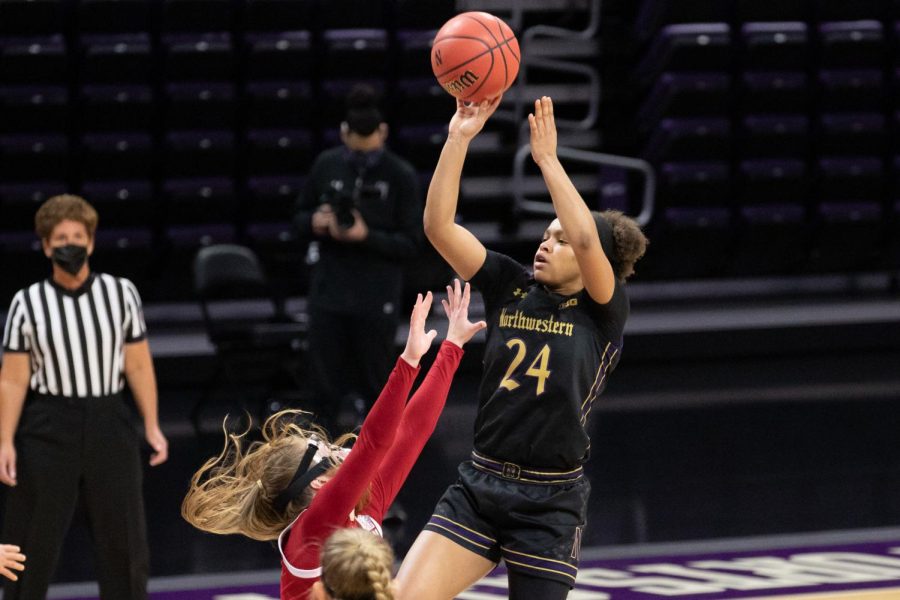 Northwestern could not hold off the fast-paced and aggressive Cardinals Wednesday, resulting in a disappointing loss that ended their run in the NCAA tournament.

No. 7 Northwestern lost 62-53 to No. 2 Louisville, a disappointing follow up to their dominant performance in their tournament opening against No. 10 UCF. The Cardinals’ shooting accuracy skyrocketed in the second half. But for much of the first two quarters, things looked like they were unfolding to the tune of a historic Northwestern upset.

“It’s really disappointing but I’m proud of my team for how hard we played,” coach Joe McKeown said.

The team took control of the matchup early playing at their tempo. After five minutes, four different players were on the scoreboard for the Cats.

The Cardinals had a size advantage that was apparent at the outset. But senior guard Jordan Hamilton still shot 100% from field goal range and behind the arc in the first quarter. She racked up 12 of the team’s 25 first quarter points

NU also dominated the defensive post, forcing 16 Louisville turnovers. They forced the Cardinals into their lowest scoring quarter of their season, allowing just 10 points all-frame. In the last minute of the first quarter, senior guard Lindsey Pulliam smacked down an attempted drive up layup by Louisville senior guard Dana Evans.

The Cats were in control until the second quarter. NU’s offensive well dried up when they got off the mark. The Cats’ missed eight straight field goal attempts, allowing the Cardinals to go on a 6-0 run. Junior forward Courtney Shaw stopped the NU’s second quarter scoring drought with a layup in the post.

The Cats answered Louisville’s run with a 7-0 run of their own. NU ended the half up 12 even though the Cardinals outscored them 10-7 in the second quarter. Pulliam ended the first half quietly, tallying only one point and two assists.

Junior guard Veronica Burton scored thirteen points in the game, tripling her four point performance Monday against UCF. Her defensive presence was important in limiting Evans, a two-time ACC Player of the Year, to 14 points.

In the third quarter, NU continued to struggle to put the ball in the net, hitting on just four of 16 field goal attempts. Shaw was the Wildcats’ shooting standout in the frame, collecting six points in a bid to hold off the Cardinal onslaught.

The Cats’ shooting woes would come to haunt them in the last three minutes of the third quarter, when Louisville went on another 9-0 run to cut NU’s lead to 3 points. Louisville junior guard Ahlana Smith led Cardinals’ scoring with 8 points to tie the game.

“We couldn’t get buckets,” McKeown said. “The biggest lesson of the game was that we let (Louisville) back in the game.”

NU struggled mightily with its shooting in the third, getting outscored 20-8 in the frame. By the time the fourth quarter rolled around, Louisville got its first lead of the game.

The Cardinals led NU for the majority of the fourth quarter, but there was still time for a Wildcat comeback. Hamilton hit a game saving three point shot with over three minutes remaining putting NU back to within three points. But Louisville quickly brought its lead back to five with two free throws from freshman forward Olivia Cochran.

NU looked tired for the remaining minute of the game, committing rarely made fouls to extend the Cardinals lead to seven points. The team resorted to fouling once they lost possession of the ball putting Louisville to the free throw line.

“Louisville is a great team, but I don’t think it was necessarily anything they did. It was more on us,” Burton said. “I think we learned this week that we’re capable, we have a lot of potential, and we belong (in the NCAA tournament).”

— Women’s Basketball: Northwestern advances to the second round of the NCAA tournament with the Cats’ first NCAA win since 1993