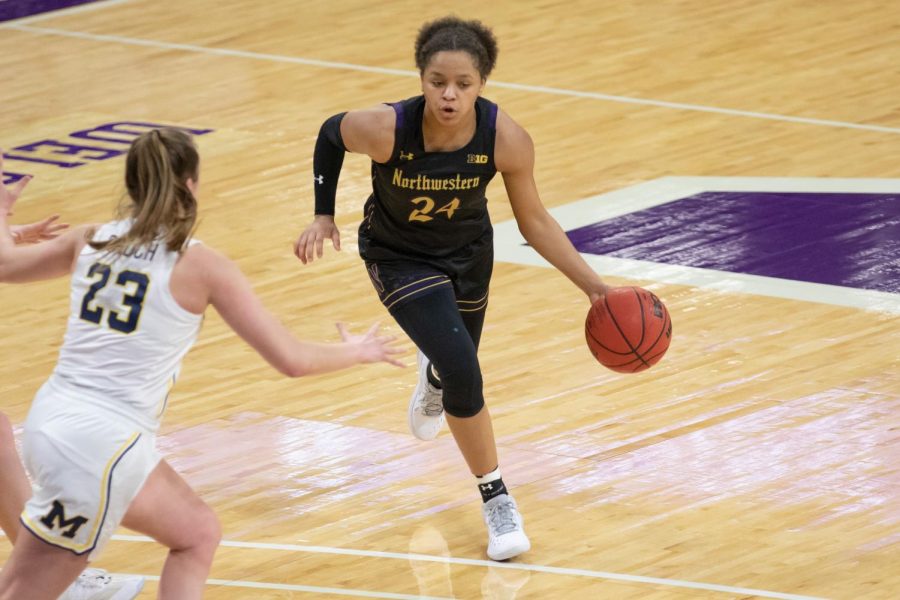 Jordan Hamilton drives to the basket. The senior guard scored 17 points in No. 7 Northwestern's Round of 32 loss to No. 2 Louisville.

After leading by as many as 18 points in the first quarter and slowing one of the nation’s best offenses, it looked like No. 7 Northwestern could potentially pull off a victory against No. 2 Louisville.

However, the Wildcats were outscored 52-28 in the final 30 minutes, eventually falling to the Cardinals 62-53. After making the NCAA Tournament for the first time since 2015 and defeating No. 10 UCF in the Round of 64, the Wildcats head back to Evanston after almost beating one of the top programs in the country.

The opening moments of the game belonged to Jordan Hamilton. The senior guard began the scoring with a 3-point shot and then added two more baskets to notch the first seven points of the contest.

NU eventually raced out to a 16-2 lead behind a 9-0 scoring run. Draining all four of their 3-point attempts, the Cats’ large lead was guided by Hamilton, who scored 12 points.

Meanwhile, Louisville — whose scoring offense is the 14th-best in the nation — was stifled by an NU defensive effort that forced four turnovers and 14 misses on 18 shot attempts. Coupled with the Cats shooting nearly 65 percent from the field on 14 attempts, the purple-and-white led 25-10 at the end of the first quarter.

The start of the second quarter was very different from the previous frame.

No team scored for two minutes until Louisville guard Kianna Smith nailed a jump shot. The Cardinals then proceeded to score six straight points and cut the Cats’ lead to nine. Junior forward Courtney Shaw eventually added NU’s first points of the quarter more than five minutes into the period.

Her basket would spark a 7-0 scoring run by the Cats that concluded with junior guard Veronica Burton’s second 3-pointer of the day. Up 32-16, NU forced five turnovers and held Louisiville scoreless for nearly four-and-a-half minutes.

The Cardinals added two late baskets to make the score 32-20 at halftime After 20 minutes, All-American Dana Evans scored only seven points as Louisville shot 28.1 percent from the field for its lowest point total in a half this season.

The teams traded baskets at the beginning of the third quarter, though the Cats used three straight baskets to take a 40-28 lead just over halfway through the frame. However, the Cardinals quickly took over, finishing the quarter on a 12-0 scoring run to tie the game at 40 after 30 minutes. Amid the Cardinals’ successful sequence, NU failed to score for more than five minutes and missed seven straight shot attempts.

Louisville continued its run into the final quarter, scoring five straight points. The Cats eventually cut the Cardinals’ lead to two courtesy of baskets from senior guard Lindsey Pulliam and Shaw. However, Evans — who finished the game with 14 points — nailed a triple to put Louisville up 50-45 with a little over four minutes remaining.

The Cats soon nailed two foul shots courtesy of Burton and responded to a Cardinals triple with a 3-pointer of their own from Hamilton.

Burton went to the free throw line again with the chance to cut Louisville’s lead to one, however, she missed both. Forward Olivia Cochran then nailed two free throws of her own to give the Cardinals a 55-50 lead, one they would never relinquish.

1. Offense struggles after first quarter.
Northwestern caught fire in the opening 10 minutes, racking up 25 points — nearly half of them coming from Hamilton. The Wildcats went four-for-four from behind the arc and six players found their way to the basket. Holding Louisville to only 10 points in the first quarter allowed NU’s offensive output to set the tone early on. But, the momentum started to shift. Even though the Cats used a 7-0 scoring run to maintain a double digit lead in the second quarter, the team failed to get a basket until halfway through the frame. Then, in the third quarter, NU did not score for more than five minutes, allowing Louisville to turn a 12-point deficit into a tie game. After shooting 64.3 percent in the first quarter, the Cats shot at or below 25 percent in the following two frames. Additionally, the team was outscored 30-15 combined during the second and third quarters. A similar narrative occured in the final quarter, as NU shot 26.7 percent from the field to Louisville’s 45.5.

2. Jordan Hamilton leads the way in scoring.
Against UCF, Hamilton scored eight points in Northwestern’s Round of 64 win. Today, she topped that total in the first quarter. Hamilton showcased her ability to score from all around the court during the opening ten minutes by nailing jump shots and an attempt from behind the arc. Even though she finished the first frame with 12 points, Hamilton would only score five more points in the contest on 13 shots. The Texas native’s last points of the game — a triple — cut Louisville’s lead to 50-47 and gave her 17 in the Round of 32 matchup.

3. Despite the loss, the 2020-21 campaign was a success for Northwestern.
After the cancelation of last year’s NCAA Tournament in which the Wildcats were projected to be a top-four seed, NU looked to clinch their second Big Ten title in as many seasons. Even though it did not achieve that goal, the 2020-21 season saw Northwestern achieve some impressive wins and milestones. The Cats upset top-15 Ohio State in Evanston and avenged their postseason loss to Michigan in a huge win during the Big Ten Tournament Quarterfinals. Burton won the Big Ten Defensive Player of the Year for the second year in a row and Pulliam became the third player in program history to score 2,000 points. Most importantly, the purple-and-white made the Big Dance for the first time since 2015 and nearly defeated one of the top programs in women’s college basketball. With players such as Burton, Shaw and guard Sydney Wood — as well as forwards Anna Morris and Paige Mott — returning, the future remains bright in Evanston.