Lacrosse: No. 3 Northwestern sweeps No.7 Penn State in weekend double-header 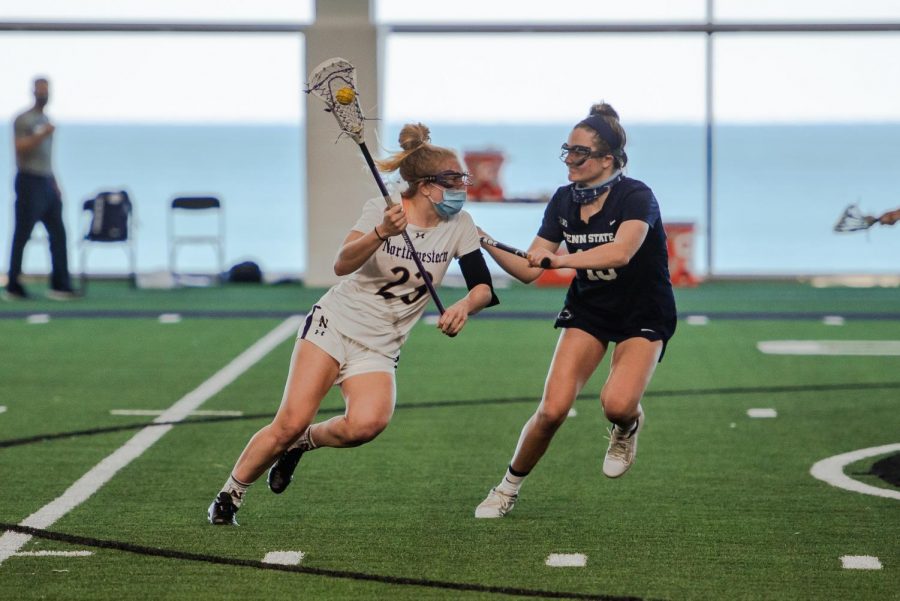 Graduate student attacker Lindsey McKone runs the ball down field during Northwestern’s matchup against Penn State on March 11. McKone had two assists and four goals during the Cats’ games against the Nittany Lions.

Northwestern lacrosse played its first ranked opponent of the season, sweeping Penn State in a double-header at Ryan Fieldhouse. The weekend’s victories put the Cats at 5-0 for the first time since 2012— when the team last won a national championship.

The No. 3 Wildcats dominated the No. 7 Nittany Lions on Thursday, delivering a commanding 24-13 victory. They won again on Saturday 17-13. Penn State came close in score during both games, but Northwestern maintained its lead the entire weekend.

The Cats had a 4-0 lead just eight minutes into theThursday game, but the Nittany Lions quickly tried to catch up. The score at halftime was 11-9 and Penn State pulled within one goal of NU about a minute into the second half. From there, the Cats’ offense took over, scoring 13 times to the Nittany Lions’ two over the following ten-minute span.

Coach Kelly Amonte Hiller said it took time for the Cats to break through on Thursday.

“Penn State’s a strong team and we had to wear them down a bit,” Amonte Hiller said. “We were able to get momentum and our team is very strong when we’re on a roll.”

Gilbert led the team with a career-high seven goals and tied Dwyer for the most draw controls, winning seven off the circle on Thursday. Gilbert said recording a career-high was exciting, but she felt the game was a “true team win.”

“We’ve tried to work on getting our entire offense connected, getting everyone involved,” Gilbert said. “Everyone in our offense had a great stat line, it shows how everyone in the offense is being dynamic, being a threat.”

The Cats won again on Saturday, withPenn State spending most of the game playing catch-up.

The Nittany Lions did pull ahead on one key statistic on Saturday: draw controls. The first half of the game was nearly even, as the Nittany Lions won eight to the Cats’ seven. Penn State pulled ahead in a big way during the second half, winning 12 of 17 draws. The Nittany Lions’ second half dominance on the draw gave them more offensive looks, providing an opportunity to pull within three goals as NU experienced an 11-minute-long scoring drought.

“It’s definitely hard to beat a team like Penn State twice, especially in the same weekend,” McKone said. “I was really proud about how we were able to pull it out. Even though it wasn’t our best game, we were able to have toughness and make plays when we needed that.”

Prior to Thursday’s game, McKone, Gilbert, junior attacker Izzy Scane and graduate student attacker Sammy Mueller were each announced as watch list candidates for the Tewaaraton Award. The award is given annually to the top male and top female player in college lacrosse, and the watch list recognizes early contenders. NU players have won the award five times in its 20 year history, with Shannon Smith being the last to do so 2012.

Amonte Hiller said players receiving recognition from the Tewaaraton committee is a “great sign” for the overall program and said it was akin to team awards.

McKone said it was a “huge honor” to be on such a list and having four players on the list points to success within NU’s program as a whole.

“It’s exciting, but it’s more a testament to our team and how much better we can make each other on the field,” McKone said.